Climb into the world of bouldering 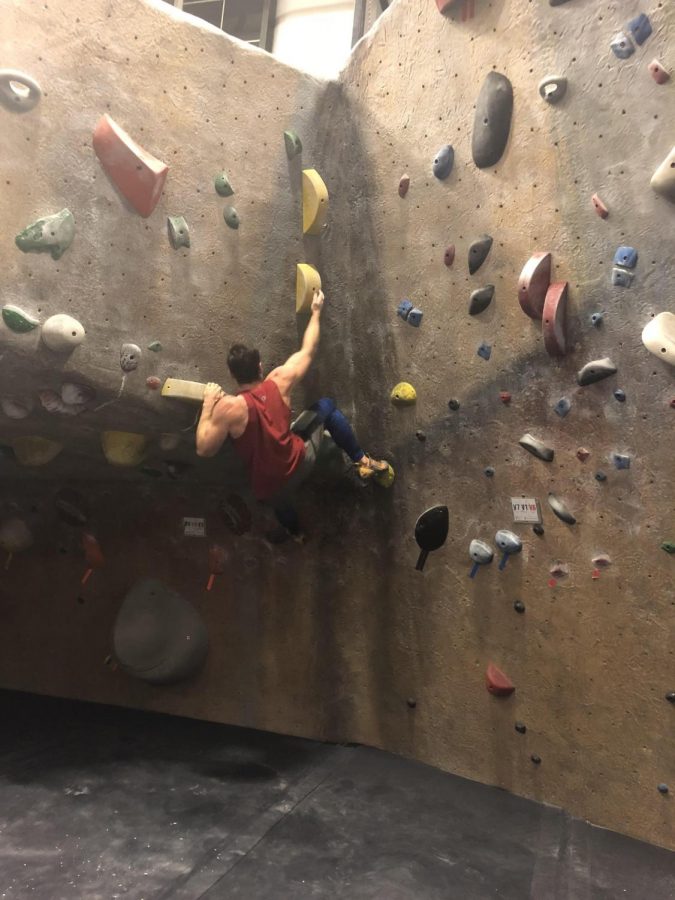 UMass sophomore Andy Dickinson scales the wall of Central Rock Gym on an outing with the Western Mass Bouldering Club.

HADLEY — University of Massachusetts Amherst sophomore Andy Dickinson has no harness attached to him as he attempts to scale the complicated climbing route he rests at the bottom of. He hangs onto one of the protruding yellow rocks while he swings his body to get his legs high enough to grip on an elevated rock with his foot. After a few swings, he gains just enough momentum to get his foot on the small rock above. He continues to push himself to the top of the 15-foot rock structure. This is bouldering.

Bouldering is a high-intensity version of rock climbing on the sides of large boulders. What makes it unique to other forms of rock climbing is that it’s done without the use of rope, and it covers shorter distances of about 10 to 20 feet from top to bottom.

“It’s really just you and the wall — there’s no rope, harness, or anything holding you,” Dickinson said. “You need more explosive rock climbing skills, it’s less stamina based.”

Dickinson is a member of the relatively new UMass Registered Student Organization known as the Western Mass Bouldering Club. The club is not about competition between climbers, but instead promotes recreational fun, confidence building and alleviating stress with climbing. Sophomores Peter Murphy, Minki Hong, Sophie Jackson and Sophie Epstein founded the bouldering club in January of their freshman year with the hope of connecting with more climbers on campus.

“As a freshman, I was looking at all the RSOs available and they didn’t really have anything specific to climbing. I was talking to my friends that also enjoy climbing and was like ‘Ya know, they don’t have a climbing club. Maybe we should do something about that and make one,’” club Co-President Murphy said.

Club members typically meet up at Central Rock Gym two to three times a week, and once a month take trips to Farley Ledges in Erving, Massachusetts for outdoor climbing when the weather permits it.

“Outdoor climbing is definitely very different than indoor climbing,” said Murphy. “There’s no bright red hold showing you where to put your feet. It’s not necessarily harder, just very different. At first, it can be discouraging,” said added, “but my motto is ‘if it’s discouraging the first time, always come back and you’ll see improvement.’”

The bouldering club accepts members of all skill levels. Because they are sponsored by the gym, they have the opportunity to provide free passes to beginners who want to give bouldering a try.

“It’s a very low-key club. We’re not competitive. We’re not trying to get huge,” said sophomore bouldering club Co-President Hong. “It’s a fun club that we try to keep to a more personal level in terms of club activities.”

Sophomore club member Thomas O’Connor joined without any prior bouldering experience when the club was initially taking off. Months later, real progress has been made.

“When I first started, the challenge was the mental game. I am one to beat myself up pretty quickly and climbing has actually helped me with that,” said O’Connor. He started at level zero but has now climbed his way to level four in wall climbing difficulty.

Even for more experienced boulderers, the club adds value to climbing. While senior civil engineering major Nick Arena may be a new addition to the club, he has over three years of experience climbing on his own at Central Rock Gym.

“I sort of just hopped in,” said Arena. “It’s always good to have people climbing that are excited as you are about climbing.” When climbing with less experienced club members, Arena often takes the time to give them pointers when needed.

For both Arena, O’Connor and other bouldering club members, bouldering is the perfect getaway from the stresses that can come with being a college student. Arena spent the majority of his day studying for an exam and O’Connor had a long day of classes before coming to the gym.

“[Climbing] takes me out of my head,” said O’Connor. “I’m thinking all day at school so it’s really nice to apply myself only with my body after four classes in a day.”

While bouldering is relatively safe, injuries can happen just like they occur in sports and other forms of physical activity.

“There is always a risk, even if you’re doing something seriously easy,” said Club Treasurer Epstein. “The important thing is we have as much padding as we physically could. Med kits are where they have to be. I even just placed an order for 360 band-aids as well.”

For the majority of the club members, injuries have remained pretty minor with soreness of joints, small scrapes and the occasional rolled ankle being most common, but from time to time slightly more serious injuries can happen.

“Last spring semester, I hyperextended my knee because I missed the crash pad when I jumped off the wall, but that was on my part,” said club Vice President Jackson. Since then, Central Rock Gym has been updated from several smaller crash pads on the floor to covering the whole floor with padding.

The Western Mass Bouldering Club is still growing but has already been recognized by receiving the SAMMY award for Outstanding Recreational Club.