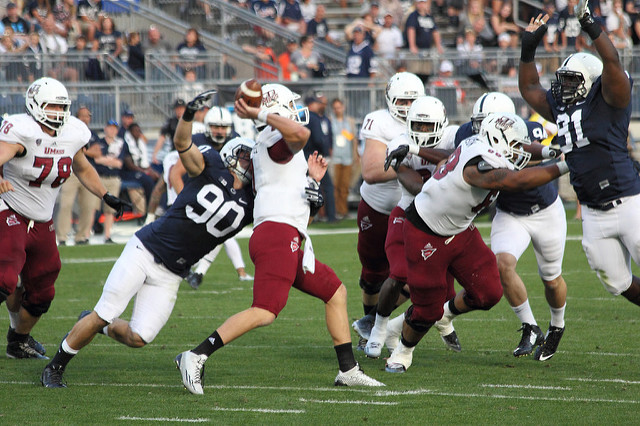 In order to take the next step forward, UMass football needs to join a conference. (Clint Mickel/ Creative Commons).

This is the first installment of Daniel Morrison’s take on UMass Football.

The University of Massachusetts Amherst football team declined to join the Mid-American Conference (MAC) as a full member, because the team wanted a more suitable conference. They didn’t find one, and are now an independent school in the Football Bowl Subdivision (FBS).

This puts the team with the likes of the University of Notre Dame, Brigham Young University, and Army University. The one benefit of this is that the team controls their entire schedule. They are able to take a couple very large paychecks from playing powerhouse teams in the Southeastern Conference (SEC), and schedule eight to ten weaker opponents. In a perfect world for UMass, this works out to a 7-5 season, an opportunity to play in a bowl game, and maybe even some national exposure.

Unfortunately, it isn’t a perfect world.

UMass can’t win seven games. The Minutemen struggle getting to just four, as the four wins in 2017 are the most the team has had since joining the FBS. That’s not worth any national exposure. That’s not the six wins over FBS opponents required for a bowl bid.

In order to get a better team, UMass must recruit better. This is very difficult to do for a school like UMass. Recruits simply do not want to play in the Northeast, for a team that hasn’t had a winning record in the FBS and plays for an empty stadium.

So, in order to get better at recruiting, UMass must find a different way to recruit. Oftentimes, this means coaches must sell themselves to recruits, but that has generally only been successful with offensive recruits. Unsurprisingly, the UMass defense is still in poor shape. So, what sets similar schools apart? National exposure.

Why does the University of Connecticut have any national exposure? After all, it’s been a while since UConn has had a great team.

The difference is that UConn plays in a conference. Therefore, there is a powerful organization setting up television deals to put the team on national television more often. As of now, the only nationally televised UMass games are against top tier football schools that typically beat UMass convincingly.

However, if UMass joins a conference, the team will be able to play nationally televised games that could be competitive. As a result, more recruits will become aware of UMass, the fan base will expand and revenue will increase. All of those factors would allow UMass to invest more in the football program.

Finding a conference for UMass will be an extremely difficult task, though. The weak MAC is unlikely to take the team back, even though this conference is the best current fit for UMass.

If UMass could choose a conference, it would almost definitely choose the American Athletic Conference (AAC). The AAC is the top “Group of 5” conference, and joining it would open Florida as a recruiting ground, and establish rivalry games with UConn and Temple University. UMass can offer nothing for the AAC, however. They neither win enough, nor generate enough revenue to be an attractive addition for the AAC.

This leaves Conference USA (C-USA) as the only realistic option for UMass. C-USA is a weak conference with minimal television exposure, but it’s still better than the current situation. Revenue and exposure would go up, and Florida would be opened as a recruiting ground by virtue of Florida Atlantic University and Florida International University. FIU, which UMass already plays annually, could make for a great rival in the future. This is a conference UMass could join and compete almost immediately. Therefore, it’s the most realistic option.

However, there are still issues with C-USA. Travel would be a struggle, as UMass would be the only northern school. Moreover, the odds C-USA would even want UMass are minimal. UMass football – in its current state – doesn’t offer enough to be worth the trouble of making the other teams in the conference travel to Amherst.

It’s difficult to determine what the best conference option for UMass is. But in order to improve recruiting, gain more fans, and increase revenue, UMass needs to join a conference immediately.