UMass will party with Cardi on April 25 at the Mullins Center with doors opening at 7 p.m. 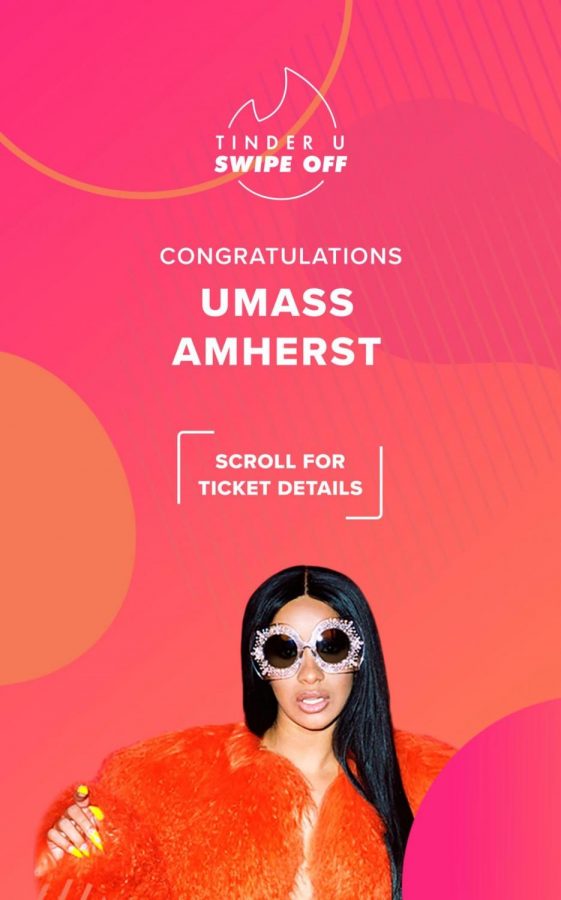 The official Cardi B concert announcement from Tinder. (Photo/Tinder)

After nearly a month of rigorous right swiping on their Tinder accounts, students at the University of Massachusetts Amherst have earned their chance to “party with Cardi.”

After first being reported by ZooMass via Twitter, Tinder announced Wednesday that UMass was the winner of their #SwipeOff contest, which rewarded the university with the most right swipes a free concert by chart-topping rapper Cardi B.

UMass students out-swiped students from 63 other schools between March 30 and April 17, defeating Northeastern University in the championship round.

Cardi B released her first studio album, “Invasion of Privacy,” on April 5, debuting and remaining at the top of the Billboard 200 chart since, featuring hit singles such as Billboard Hot 100 chart-topper “Bodak Yellow” and “Bartier Cardi.”

She has also collaborated with other artists on numerous hit tracks, such as the remix of Bruno Mars’ “Finesse” and Migos’ “MotorSport” along with Nicki Minaj.

Tickets for the show are free to UMass students with a Tinder account and available on a first come, first serve basis starting 10 a.m. Thursday at the Mullins Center box office. Students interested in going must present their UCard student ID and proof of a Tinder account to the box office staff.

Tickets are limited to one per person.

The concert will be held at the Mullins Center on April 25, with doors opening at 7 p.m.