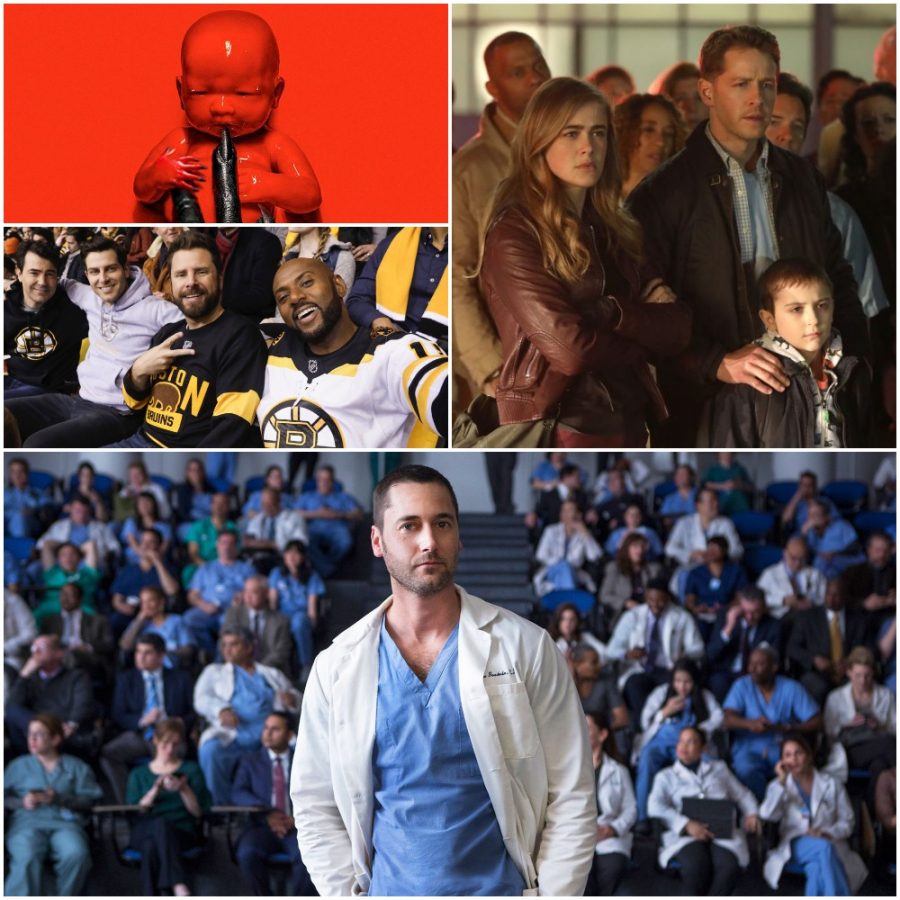 From football to foliage, pumpkin spice to apple picking — there’s lots to enjoy each year with the return of fall. Though it’s important to get outside and savor the crisp autumn air while it lasts, you’ll also want to pencil in some time on the couch to catch up on the best new shows that cable television networks have to offer this season. While you may have missed the first few episodes, don’t let that deter you — keep reading to find out which new shows are worth catching up on.

If you’re like me, you may be in the habit of turning up your nose at any medical drama that’s not Grey’s Anatomy, thinking it could never compare. However, the trailer for “New Amsterdam” intrigued me enough to put aside that bias and give it a chance, and I’m so glad I did. America’s oldest public hospital, New Amsterdam, gets shaken up by newly-hired medical director Dr. Goodwin, whose philosophy is that “any department that places billing above care will be terminated.”

Rather than focusing on administrative tasks, Goodwin spends nearly all his time marching around the hospital asking everyone from doctors to nurses to the janitorial staff how he can help make their jobs easier. With the theme of bureaucracy versus patient care immediately taking shape, I knew the show’s plot would transcend your average gory medical phenomena and trips to the on-call room. But don’t get me wrong, there’s still plenty of drama and secrets in their personal lives to fulfill that need as well.

Catch up on the episodes you missed on NBC’s website.

While flying is a common fear, it’s usually the thought of crashing that gets to us — not landing and realizing five years have mysteriously gone by while you were in the air. This was the case for passengers on Montego Air Flight 828 in the first episode of “Manifest.” For many passengers and their loved ones this is a miraculous second chance, as it is for young Cal who was facing terminal cancer before the flight but learned after landing there’s a new treatment that could cure him. For other passengers, though, the return to the present day brings immense pain and suffering, finding out their loved ones had passed away or moved on and adapted to life without them.

At first, the desire to keep watching is mostly driven by the curiosity of what kept them in the air so long (aliens? a time warp?). You’ll especially want to stick around after some of the passengers start hearing guiding voices that make them wonder if some kind of higher power has a hand in their situation. If you’re someone who enjoys a web of intertwining plot lines and even conspiracy theories, give “Manifest” a try.

Catch up on the episodes you missed on NBC’s website.

If you’re someone who enjoys crying at television instead of real life — or someone who doesn’t get emotional over fictional characters (*cough, cough* psycho) — “A Million Little Things” is perfect for you. A Boston-based group of friends, who initially bonded over their love of the Bruins while stuck in an elevator, is shaken by the sudden death of Jon, the wise and seemingly perfect one of the bunch. Jon’s friends, wife and children are left wondering why he chose to take his own life, as they grapple with the notion that “everything happens for a reason.”

While some critics might deem the show to be too full of cliches or too wrongly portraying suicide as something that needs a clear-cut ‘reason,’ I disagree with these judgments. “A Million Little Things” reiterates important messages about mental health, such as that those struggling don’t always show signs of it and that there doesn’t necessarily have to be anything “wrong” in one’s life for them to be hurting. One of the other friends, Rome, who had a mouth full of pills when he got the call about Jon’s death, points out that he himself feels so unbearably hopeless at times despite having the most amazing woman by his side and a job that pays a decent salary. Hopefully, having a show like this on air will only help fight the stigma, and encourage people to check in on their friends and seek help for themselves when needed.

Catch up on the episodes you missed on ABC’s website.

“American Horror Story: Apocalypse” is the eighth season of AHS, but with each season starting anew with different plot and characters, there’s no need to worry if you’re not all caught up on the previous. However, this season does seem to have more crossovers with other season’s characters than ever, which is especially exciting for fans of AHS’s third season “Coven” as our favorite witches are back. “Apocalypse” is keeping us on our toes so far, shifting from one plot line to the next rather quickly.

The show began with a nuclear blast that destroys the world and leaves only those deemed genetically superior (and those rich enough to buy a spot) in an underground bunker riding out the apocalypse. Michael Langdon (Cody Fern), who may or may not be the Antichrist, shows up and the focus soon changes to a struggle for dominance between him and his following of Warlocks, and the witches and their Supreme, Cordelia (Sarah Paulson). As usual, this season of AHS isn’t for the weak-stomached, but it’s just the right amount of spooky for those trying to get into their Halloween groove.

Catch up on the episodes you missed on FX’s website.