Cobb discussed issues of race and speech on college campuses. 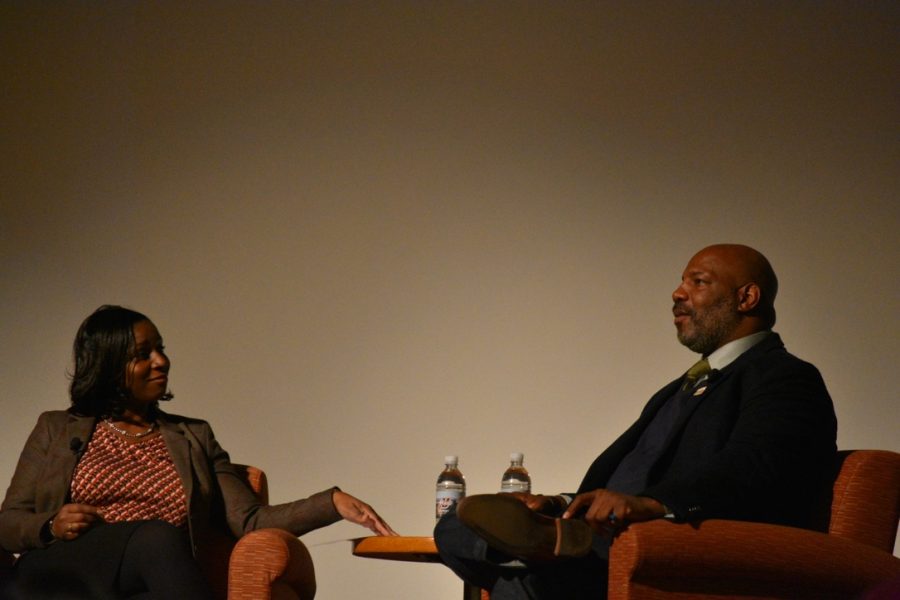 AMHERST– On Tuesday, Columbia University journalism professor and New Yorker writer, Jelani Cobb, was part of a symposium at the University of Massachusetts centered around political and social polarization.

The daylong symposium, titled, “Understanding the Forces that Drive Us Apart,” featured a variety of prominent speakers, panel discussions, film screenings and book signings. UMass professor, Anna Branch, moderated Cobb’s speech. Together, they discussed many of the issues the black community is facing on and off college campuses.

Race was a topic of great importance, with the first question being: “What is different about speech on a dominantly white campus versus dominantly black ones?” Cobb said he visited many college campuses – too many to give an accurate count – and one thing has been almost universal.

Free speech became the next topic of the talk between Branch and Cobb. She asked who decides when free speech crosses the line and becomes intolerant speech.

Cobb used the example of workplace comments saying that you can complement your coworker but once you start making sexual comments, you can’t claim free speech as your defense. He briefly mentioned Virginia governor Ralph Northam’s recent controversy involving blackface and ridiculed the governor’s defense and flip-flop on whether he did or did not do blackface.

Cobb mentioned that while there is free speech, there are times when speech is limited, such as slander and libel. He mentioned Supreme Court Justice Clarence Thomas, and while he normally doesn’t agree with Thomas, there was one time he did.

“That raving radical right-wing revolutionist, Clarence Thomas, said ‘the only purpose of burning the cross is to intimidate people,’” Cobb recalled.

The conversation then shifted to journalism and peoples’ trust and distrust of news outlets. To start the topic, Cobb briefly talked about the history of journalism in the U.S. and the history of newspapers geared toward ethnic and racial minorities.

With trust in news outlets deteriorating, Cobb mentioned that there are only three consistent institutions that people trust.

“Three institutions that people trust are small businesses, the police and the military; and two of those can kill you,” Cobb said, claiming that this was for all Americans, not just black Americans.

Cobb claimed this distrust is due to selection bias; meaning that people won’t agree with news stories they hear due to their personal feelings toward the person or organization telling them the information.

People have a preferred news source and if they hear a story from an organization that has opposite views, they won’t listen to that source.

The two professors then talked about the rise of racist incidents on college campuses and what people can do when confronted by someone whose views do not align with theirs. Cobb believes that there is already coexistence on campuses, meaning that people of all races, ethnicities and viewpoints are together here and are able, for the most part, live civilly together without much tension.

“We don’t simply live in our own neighborhoods,” Cobb said, ”as long as someone does not cross the line of bigotry it is your responsibility as a person not to engage with that person.”

Cobb used a story from his days as a young boxer to explain why you shouldn’t confront people without first educating yourself in a way you can peacefully influence their viewpoints.

In his first fight, he faced someone a weight class lower than him. As soon as the match began, his opponent would move around him, pulling his fists back toward themselves. It dawned on Cobb that his opponent was actually punching him in the face and was moving so quickly that he only saw his fists pulling away.

The fight was symbolic to Cobb because we’re sometimes unaware unprepared we are to go against someone we disagree with.

He went on to explain that when you tell your opponent, “that didn’t hurt,” you’re telling them the method of hurting you isn’t working. Then they’ll try a new way.

“If you feel your environment is hostile, you should never tell them your weaknesses,” Cobb advises.

Cobb then shared the first time he was called the “n-word” when he was 13 years old. Before biking home with some from friends, someone in a passing car shouted the word outside their window at Cobb.

He explained that over time, he, as well as many other black people, develop a kind of “n-word armor” – a kind of psychological armor that weakens the blow from people who use the word to hurt people. Cobb added that all groups that have been discriminated against have some version of this armor.

To close out the talk, Cobb spoke about the idea of allowing all kinds of speech on college campuses. He described the hiring process that universities have for professors. One experience he had consisted of breakfast where he was asked questions about his views and preferences on particular topics. This continued for almost 15 hours. He then asked the audience why we have to allow any “racist hack” a platform if we have these carefully curated institutions with nitpicked professionals.

“I don’t believe in filtering these kinds of events violates the rights of these institutions,” Cobb said.