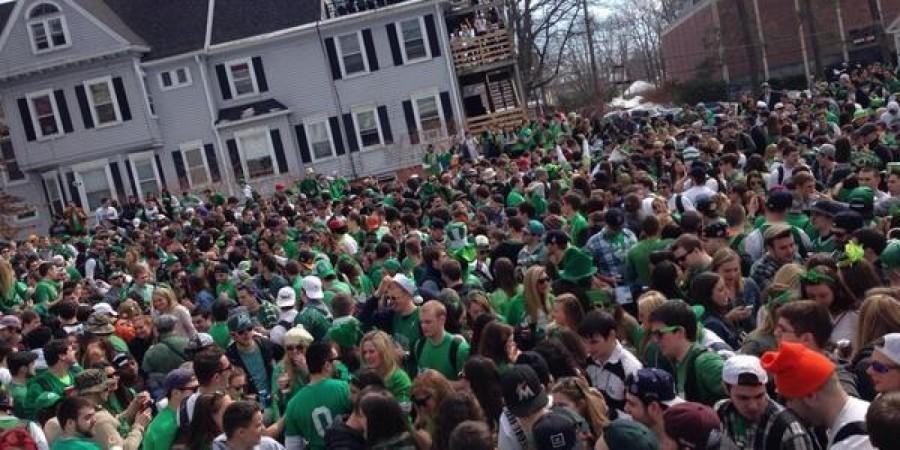 This weekend, thousands of UMass students will be participating in the Blarney Blowout, an early celebration of Saint Patrick’s Day. With students looking for an excuse to drink early and often, police on and around campus are on high alert once again.

St. Patrick’s Day falls over Spring break every year, so students created their own holiday so they can celebrate early. St. Patrick’s Day only became a minor holiday in 1631, with Christians declaring it a feast day where pubs closed and observers went to church— very different from today’s green-spirited parades dedicated to a day of drinking. The name “Blarney” comes from the famous Blarney Stone, a chunk of limestone built into a castle in Ireland. If a person kisses the stone, it’s said to give them the gift of eloquence.

On the first Saturday of March every year, UMass students have traditionally embarked on an all-day alcohol binge. With a semblance of a reason to party hard throughout the day, students pose a safety threat to themselves and others.

Five Blarneys ago, police arrested 73 people for various noise, intoxication and assault complaints. Since then, the university has increased its police presence on campus exponentially during this weekend. In years past, over a dozen local police departments have been enlisted to assist UMass Police during Blarney.

In an email, Deputy Director Mary Dettloff of the UMass Office of News and Media Relations said, “The comprehensive plan we have with the town [of Amherst] is very similar to years past and has been proven successful the last couple of years.” Restrictions on parking and guests, as well as increased security hours, have been imposed with the hopes of keeping students safe on campus. From Thursday, Feb. 28, through Sunday, March 3, students can only check in up to four UMass guests. Non-UMass students will not be permitted in residence halls.

Amherst Chief of Police Scott Livingstone told Western Mass News that over 100 officers will be coming in to patrol. Areas that have been trouble in the past (such as Hobart Lane, the Townhouse Apartments, Philips Street, Fearing Street, and Lower Main Street) will be a focal point for officers.

Dettloff went on to say “[The comprehensive plan] includes the Mullins Live! concert event.” In recent years, the university has hosted a concert to lure students away from all-day binge drinking. As of today, about 3,400 tickets have been sold for this year’s show, which features some big names including Future and Gunna. Students are also encouraged by the university to “attend the final home hockey game (8 p.m.) at Mullins.”

Kamins Real Estate, one of several real estate groups renting to students in Amherst, sent a letter to residents of Hobart Lane warning of extra parking enforcement and police presence for the coming weekend.

While Blarney Weekend was notorious for many years at UMass, the university’s efforts to tranquilize the holiday have been largely successful in recent memory. In 2015, responding to the 73 Blarney arrests from the prior year, UMass spent roughly $330,000 on the concert, increased police presence, ambulance staffing, food and other measures. Chancellor Kumble Subbaswamy spent an additional $160,000 on hiring former Boston Police Commissioner Ed Davis to review the situation and create an incident prevention strategy.

Only six Blarney-related arrests were made in 2015.

With all the security measures in place on and around the UMass campus, this year’s Blarney will most likely be safer than your average Saturday in Amherst.