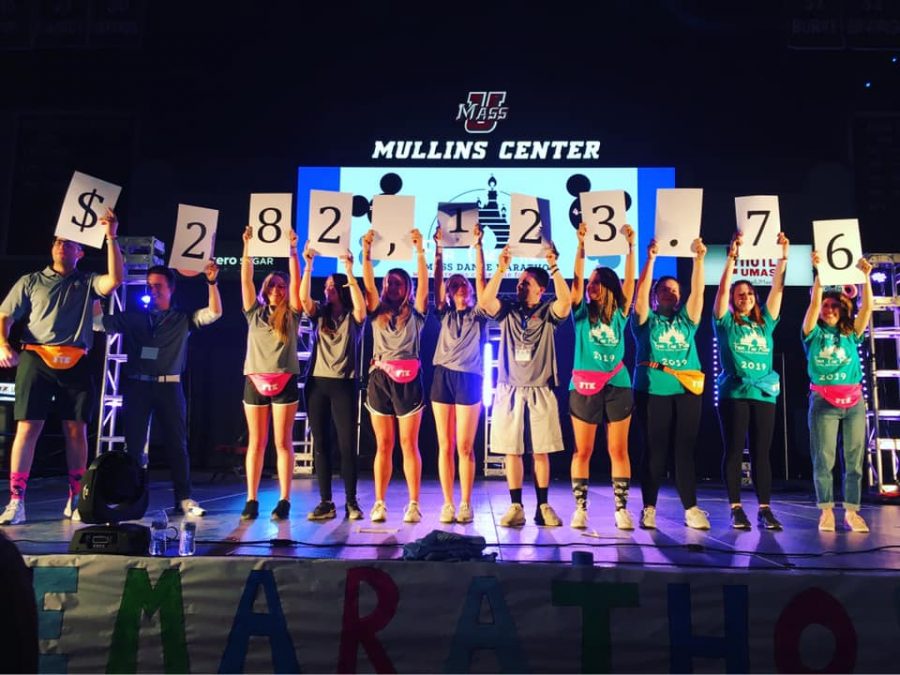 AMHERST — In one final push on Saturday, UMass For The Kids (FTK) rounded off fundraising for Baystate Children’s Hospital with their largest event, the 12-hour Dance Marathon, raising $282,000.

The climactic event, which featured free concessions, games and a DJ, brought together 1,984 participants and volunteers. Posters decorated with the names of children from the Children’s Miracle Network hung around the outskirts of the floor, greeting the children as they participated in numerous activities.

Although the group did not reach its $300,000 goal, it beat last year’s total by $70,000. All proceeds will go to Baystate Children’s Hospital, and will be used to help pay fees, equipment costs and a new Pediatric Procedural Unit.

“I can truly say that it was the most amazing experience of my life, being able to see all the people we directly affected with our efforts this year,” said Zachary Sturm, the president of FTK and senior sports management major.

“300,000 was just a number, it shouldn’t matter if we hit it or not. We surpassed last year by $70,000, and the change and difference we make on the lives of the kids at Baystate is what matters at the end of the day.”

Sturm noted the importance of moving the event from the Curry Hicks Cage and the Campus Center to the Mullins Center, a significantly larger venue. The group hopes that the 13th annual Dance Marathon’s change in scenery will cement the event as an ever-lasting tradition.

“Being in Mullins now, I can confidently say that this really is the first UMass Dance Marathon. Everything before this in The Cage and the Campus Center was a test run. The future is Mullins and we have officially started the tradition this year.”

The Dance Marathon is the culmination of various events run throughout the year by FTK, following the Day of Hope that was held two weeks earlier. Day of Hope raised $25,000, for special equipment to treat premature and ill babies at the hospital.

“I’m so happy with the outcome of this,” said Rachel Mackoff, a sophomore sociology major running one of the booths. “You just see all these little kids coming in and smiling. They don’t always get to do that everyday in the hospital. It gives them the opportunity to get out and see people that really support them and want them to get better. It’s really nice to see.”

Mackoff and other volunteers arrived at the Mullins Center at 4 a.m. to help set up the event and didn’t leave until after the cleanup at 10 p.m. Coffee and seeing the children’s excitement were the main motivators for many volunteers.

“It’s amazing seeing the dedication and the connection between FTK and the hospital. It’s been great to be a part of that journey,” said Michael Wiseman, the Fraternity and Sorority Program advisor.

Wiseman has seen the event grow over the years, and expects the program to reach $1 million in total fundraising in the near future.

FTK’s efforts each year have a major impact on Baystate since the hospital receives no funding from the state.

“One incredible team, one incredible year,” the UMass FTK Facebook page said in a post following the event. “$70,000 more than last year’s total. We are so proud, and thank you from the bottom of our hearts. As always, for the kids.”