Goldman has been a part of UMass's political science department since 1965. 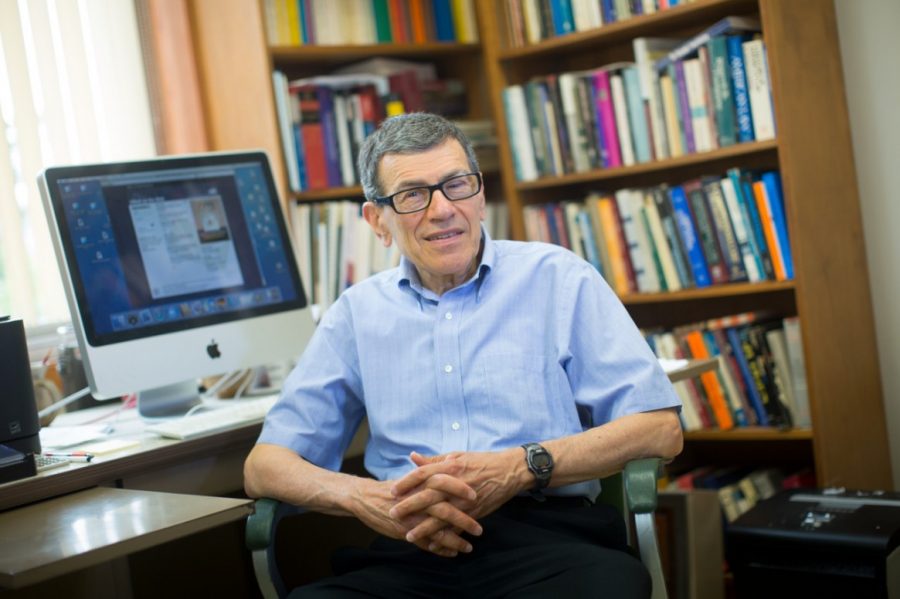 From a young age, Sheldon Goldman, a professor at the University of Massachusetts, knew exactly what he wanted to do—teach American politics in college.

Goldman was born in the Bronx and majored in political science at New York University. He then went on to get his doctoral degree from Harvard under the initial tutelage of legendary political science scholar Valdimer Orlando Key. He wrote his dissertation on appointments to the U.S Court of Appeals—the selection process, criteria and partisanship thereof, and has continued his research ever since.

As a bright-eyed Harvard graduate, Goldman joined UMass’s political science department in 1965, where he has passionately taught students about civil liberties and constitutional law ever since. Goldman, who is lovingly called Shelly by students and faculty alike, is one of the most renowned scholars on the American judicial system in the world.

In this tumultuous time in American politics, the judicial branch has been warped by partisanship and immorality. The role of the judicial branch, especially the Supreme Court, has evolved into another partisan tool for both Democrats and Republicans to push their agendas.

Goldman is currently conducting research on perhaps the most obvious example of this—the difficulty in confirming judicial appointments. Supreme Court nominees usually receive overwhelming support from both sides of the aisle. However, recent appointments like Neil Gorsuch and Brett Kavanaugh have caused enormous backlash and damaged the integrity of the Supreme Court.

Goldman said that there is clearly a “feeling among Democrats that there was a stolen seat,” referring to the unprecedented obstruction of Merrick Garland’s nomination by Mitch McConnell. He stressed the importance of the role that former Justice Anthony Kennedy played in balancing the partisan scales on the court before his retirement in 2018.

For years, Kennedy prevented conservative-leaning justices from overturning vital decisions like women’s rights to an abortion to voting and equal protection. In Goldman’s words, Kennedy often “pulled the court back from the brink.”

He stressed the fact that a more conservative Supreme Court can reverse landmark cases like Roe v. Wade, the decision that established a woman’s right to abortion. There is speculation that Chief Justice John Roberts Jr., who surprisingly voted against a law that would have seriously limited abortion rights in Louisiana, “is particularly concerned about the reputation of the court” and wants to prevent the court from being “seen as a negatively partisan institution.”

According to a number of reports and from his own admission, Roberts “thinks that John Marshall is the greatest Justice ever,” due to his tremendous effort to preserve the integrity and image of the court.

Many scholars are hoping that, similar to how Justice William Rehnquist’s behavior shifted when he became chief justice, Roberts will prioritize safeguarding important precedents and not turning the court into a partisan weapon—something he proved when he rebuked President Trump calling a district judge in California “an Obama judge.”

“We do not have Obama judges or Trump judges, Bush judges or Clinton judges,” Roberts said in a statement. “What we have is an extraordinary group of dedicated judges doing their level best to do equal right to those appearing before them.”

Sorry Chief Justice John Roberts, but you do indeed have “Obama judges,” and they have a much different point of view than the people who are charged with the safety of our country. It would be great if the 9th Circuit was indeed an “independent judiciary,” but if it is why……

Goldman predicts that if the court leans too far right and starts irresponsibly overturning crucial precedents on an ideological whim, Democrats will take matters into their own hands when they reclaim the presidency.

He warned that the Democrat’s “reckoning” would come in the form of “raising the number of justices from nine to eleven” in an effort to not go “tit for tat” but rather re-establish a “non-partisan, non-ideological court.”

Because the Supreme Court now has a Republican majority, Goldman warned that Kavanaugh, Gorsuch, Samuel Alito, Clarence Thomas and Roberts could overturn Roe v. Wade. In fact, Roberts, who is now considered the swing vote, “wrote a memo when working for the Department of Justice that the way to overturn Roe is incrementally.” Goldman said that the Supreme Court would likely dismantle Roe v. Wade by increasing “state rights” rather than “framing it as an anti-abortion issue.” However, the results would be the same.

Goldman squashed the speculation that Thomas would resign in order for President Trump to appoint another young conservative to the Court before 2020, stating, “It’s a fantastic job… fantastic for the ego.” He recounted how former Associate Justice Thurgood Marshall told his clerks that the only way he would leave the court was “in a coffin.”

Goldman also touched on the future of another influential justice, Ruth Bader Ginsburg. He commented that “she has a sturdy constitution, she has determination,” reiterating Democrat’s belief that she will hold on until 2020. Ginsburg has served on the Court since 1993.

“Theoretically, term limits might be a good thing,” he said. “It would assure turnover on the court, that there are new ideas coming in.”

However, he made it clear that it would be very difficult to have a constitutional amendment passed.

“I think 15 or 20 years is an appropriate time for a judge to serve,” Goldman said.

According to the professor, the ideal age bracket for a judge heavily depends on whether term limits have been implemented or not. If they are in place, there is no issue with appointing someone in their 40’s. However, if there are no term limits, “you could have someone sitting on the court for half a century which is very scary.”

When asked whether Democrats would renominate Garland if they win the 2020 presidency, Goldman said that he feels that Garland has “demonstrated authentic civil liberties but isn’t an ideal candidate.”

If Republicans win the 2020 presidency, he noted, Amy Barrett, “who is fiercely anti-abortion,” could fill an open seat.

What Goldman wants after years of studying the judicial branch is to have “Justices that are open-minded, that can be persuaded by good legal argument.”  The only way this can be measured is by predicting with a high degree of certainty how a justice will vote.

After discussing the politics of the Supreme Court, Goldman went on to recount the times he that met with Supreme Court Justices. Unsure of how many he had met them, Goldman remembered meeting justices Douglas, Marshall, Scalia, Brennan and Bryer.

He reminisced on backstage chats at events and panels where he was treated as their equal. Goldman even recollected an anecdote of ruffling the late Justice Scalia’s feathers by saying they had a mutual friend in common, bewildering the conservative justice.