Melanie Martinez holds nothing back on new album “K-12”

The controversial artist makes a comeback with a coming-of-age concept piece. 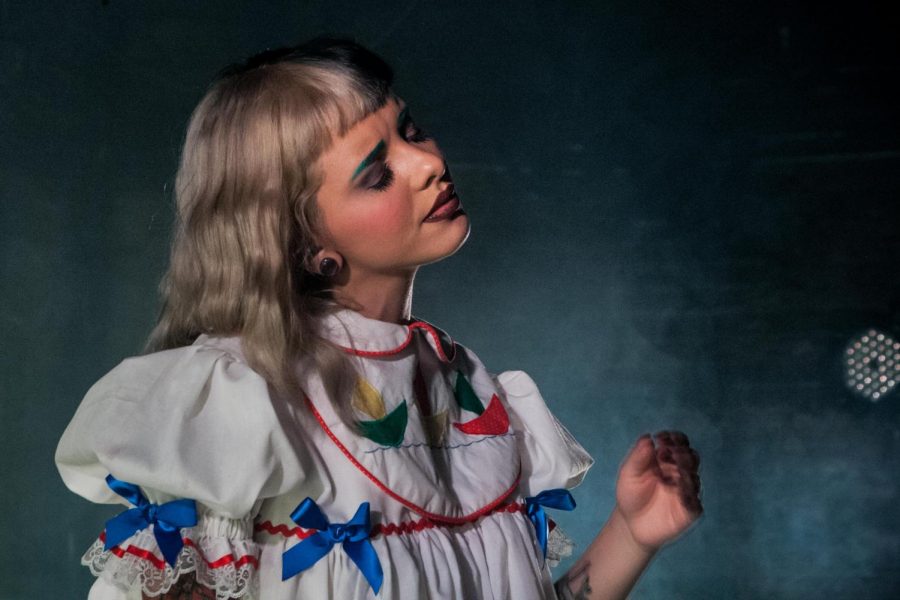 After a tumultuous four-year hiatus, Melanie Martinez returns with her second concept album “K-12” which was released on Sept. 6. Martinez’s career began on the competitive singing show, “The Voice” in 2012. After gaining recognition, she went on to release her debut album “Crybaby” in 2015. While Martinez’s aesthetic of bubblegum pop with eerily dark undertones may have mixed reviews, her projects definitely come as one of a kind. However, it’s difficult to argue that Melanie isn’t a master of her craft.

In addition to her second studio album, Melanie also makes her directorial debut by releasing a feature-length film that gives visuals to her songs.

“K-12” proves itself to be a continuation of Melanie’s last concept album, as it recounts the tale of her character, Crybaby. As portrayed in the film, Crybaby is an overly emotional young girl who seems to have been granted powers by the goddess, Lillith. Melanie begins with familiar sounds of synth-pop and carnivalesque beats, adding supporting tracks to complement the song’s theme. With every song, Melanie uses the title to create the theme of the track and delivers metaphors and similes to accompany the theme.

The album begins with the track “Wheels on the Bus.” Starting with the sound of an engine, Martinez samples the original track with backup vocals to reiterate the original song. Judging lyrics alone, this album differs from the first as it feels more like a story-telling musical with lines like “I’m just looking out the window and it’s cold outside / There are two boys yellin’ behind me and I’m terrified.”

The next few tracks “Class Fight” and “The Principal” tell more of Crybaby’s story. While, Melanie admits that Crybaby and herself are two separate entities, at times they can collide. The album flows into songs like “Show & Tell,” which feels more like Martinez’s song than Crybaby’s. She says, “Lie and sell like I’m a product of society / Art don’t sell unless you f*****every authority.” Melanie is clearly speaking her truth about being in the industry.

The next songs include “Nurse’s Office” and “Drama Club” which feels experienced-based in that each song is a metaphor for the current social climate. On the next track, “Strawberry Shortcake,” she discusses the way that men objectify women but focuses on how society places blame on women. She says, “That’s my bad, that’s my bad no one taught them not to grab.” This track stands out among the rest, especially in the current climate in the aftermath of the #MeToo movement.

Next comes “Lunchbox Friends” and “Orange Juice,” which speak to fake friends and eating disorders; discussing serious topics over light music is a reoccurring theme for Martinez. The rest of the album plays into the Crybaby narrative, ending with “Recess” which speaks to giving yourself a break. As Martinez says “Don’t let them hurt you, baby / Just say, recess, I’m tired.”

Overall, the pacing remains pretty fluid throughout the album, with Melanie playing a bit more with her sound and seeming to have found one that she’s comfortable with. This new sound definitely works in her favor. While departing from the sound of her previous album, there is something about “K-12” that feels somewhat familiar. At times the songs blend together a bit and the only way one can notice a change is with distinguishing sounds, like a bus engine starting, or coughing and sneezing. However, this works well for the sake of the film counterpart. There are songs like “Strawberry Shortcake” and “Orange Juice” that I did truly enjoy for the ties childhood nostalgia with current social and political climates. Martinez has a way of using child-like tropes to remind us that from the playground to the real world, nothing really changes.