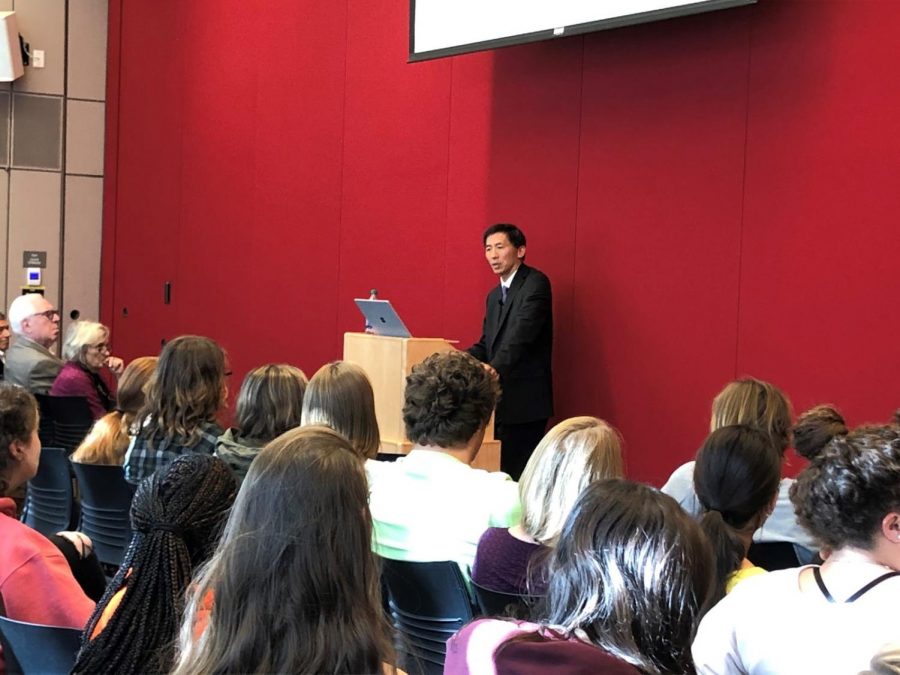 Justice Liu spoke on the “State Courts and School Desegregation: New Perspectives on Judicial Federalism and the myth of Parity.”

There were many topics that Justice Liu touched on, but the most prominent was the case of Brown v. Board of Education. This case was a consolidation of cases arising in Kansas, South Carolina, Virgina, Delaware and Washington D.C. relating to the segregation of public schools on the basis of race. In each case, Afircan American students had been denied admittance to certain public schools based on laws allowing public schools to be segregated by race. The plaintiffs argued that this segregation violated the Equal Protection Clause of the Fourteenth Amendment.

Lower courts had denied the plaintiffs relief based on Plessy v. Ferguson, which held that racially segregated public facilities were legal so long as the facilities for blacks and whites were equal.

The Supreme Court ruled in favor of the plaintiffs stating that separate but equal educational facilities for racial minorities are inherently unequal, violating the Equal Protection Clause.

“The road to Brown was more complicated than the usual Supreme Court Case,” Justice Liu said. There were four main points he had in making this statement:

“Separate but equal.” This phrase was coined in Roberts v. the City of Boston—not in Plessy v. Ferguson, which took place in 1896.

In 1845 Benjamin Roberts tried to enroll his 5-year-old daughter, Sarah, in a nearby school for whites. In 1849, the Massachusetts Supreme Court ruled against Roberts, giving local elected officials the authority to segregate schools and reiterating that segregated schools did not violate African-American students’ rights. The decision was cited over and over again in later cases to justify segregation.

Despite the Roberts decision, there were a number of State High Court decisions that granted relief to African-American plaintiffs challenging desegregated schools before and after Plessy v. Ferguson. A historian found that among 48 state high court decisions from 1834 to 1903, black plaintiffs received relief in 28 of them. During the same time period, African-American plaintiffs only received relief in five of 10 federal cases.

Charles Hamilton Houston, along with his student and protege Thurgood Marshall (who became an Associate Justice of the U.S. Supreme Court), created a strategy that would best advance through lower courts. Under Houston’s “equalization strategy,” lawsuits were filed demanding that the facilities provided for African-American students be made equal to those available to white students, carefully stopping short of a direct challenge to Plessy—Houston predicted that the states that practiced segregation could not afford to maintain African-American schools that were actually equal to those reserved for whites.

Houston successfully argued several cases over a five year period starting in 1935, using the “equalization strategy.” Houston’s cases included Murray v. Maryland, (1936) which resulted in the desegregation of the University of Maryland’s Law School and State ex rel. Gaines v. Canada (1938), in which the Supreme Court ordered the admission of an African-American student to the Law School at the University of Missouri.

The legacy of State Court rulings is apparent in Brown v. Board of Education because it was four separate cases merged into one. Cases from Kansas, South Carolina and Virginia came to the Supreme Court from Federal District Courts that had upheld segregated schools.

For instance, in Clarendon County, South Carolina, Henry and Eliza Briggs filed a suit for adequate transportation to the local segregated schools their children attended. Judge Waties Waring ruled in favor of Briggs, stating that, “segregation is per se inequality.” The case went to the Supreme Court on an appeal and was included in Brown v. Board of Education.

While Brown v. Board of Education was a landmark Supreme Court case, it was the product of something that came about in lower courts.

“The decision of Brown came on the heels of important decisions made by state courts,” Justice Liu said.

Justice Liu was confirmed to office by a unanimous vote of the California Commission on Judicial Appointments on Aug. 31, 2011.  Justice Liu clerked for U.S. Supreme Court Justice Ruth Bader Ginsburg during the October 2000 term.