The UMass Music alumni returned to campus for a mesmerizing performance at Bowker Auditorium. 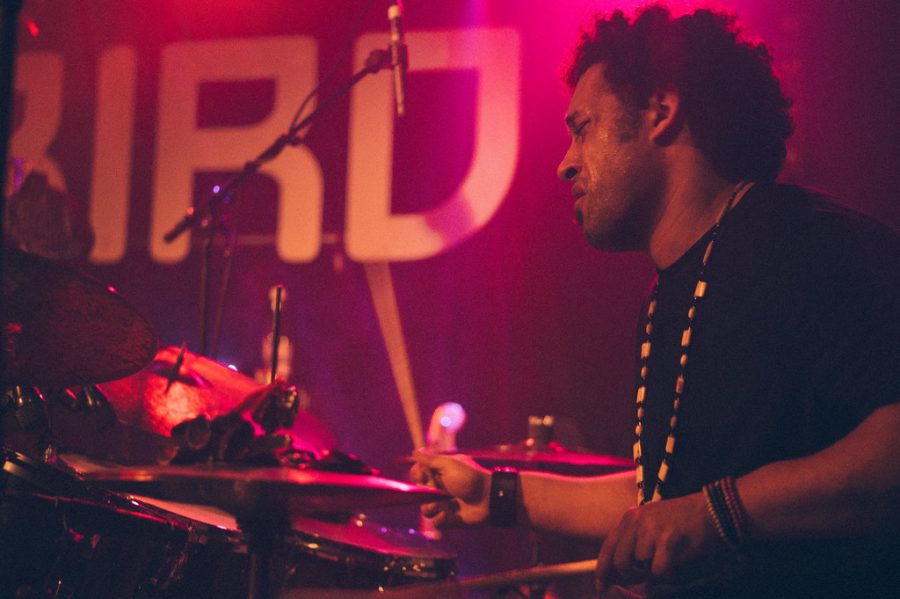 The murmurs in the crowd faded as the lights dimmed in the Bowker Auditorium. It felt almost as if the audience was collectively holding their breath in anticipation.

“There’s something about the energy of the space performing live,” remarked Makaya McCraven. “I really feel like there’s a tangible thing in the room when music is playing.”

This was the power and magic of performing live that McCraven was alluding to.

“Everyone gets quiet and they zone in for a second and all of a sudden we’re all on the same page,” said McCraven.“Not because of any cultural etiquette that they have to be quiet because of the music. I think that’s a really powerful thing when we all gather and the energy is pulled into something bigger.”

Experiencing this magic myself I understood the tangible energy MCraven was referring to. The anticipation in the room caused goosebumps to break out along my skin, the kind you only truly experience when you know something great is about to happen and you are in the presence of a true artist.

McCraven and his ensemble’s concert took place on Oct. 10 at Bowker Auditorium at UMass Amherst. For McCraven, this was a homecoming of sorts as he grew up in Amherst and studied as a music major at UMass.

His love for music started in Highschool with his band Cold Duck Complex. Most of the members were older, but after graduation, they attended UMass Amherst and the band continued on.

McCraven, still 17 at the time, had the opportunity to play for larger audiences both on campus and regionally.

“We did quite well,” McCraven said. “We won the battle of the bands, we got to open for 50 Cent and we had a regional touring act and quickly got busy.”

The band played underground concerts in the basements of Butterfield and Van Meter Hall.

“There were some festivals like Fill the Hill, that was one of the first ones I remember,” recalls McCraven. “Almost 1,000 kids came out to those hills by the dorms, that was my freshman year. We also started doing Iron Horse and stuff around town as well.”

Although he was a successful musician, balancing school life proved to be a challenge.

“I think administratively, and through the bureaucracy of the music industry, it doesn’t always allow for the flexibility of working students even if you’re already working in your field,” he said.

Despite the fact that academic and personal growth often go hand in hand, McCraven found they often conflicted with one another during his time as a student here.

McCraven, now 35 years old, is considered a beat scientist and is known for his outstanding skills on the drums.

As a multi-instrumentalist, he also plays the piano, bass and a variety of different percussion instruments to various degrees.

“I’ve always been that person that picks up a new instrument, experiments a little and learn a little bit about its technique and see what sounds I find,” said McCraven. “To me, that’s fascinating and it always leads to growth.”

For McCraven, learning new instruments is important for his writing process, during his break from touring last January he spent most of his free time teaching himself how to play the bass as a distraction from the business side of the industry.

“I’ve collected a lot of instruments throughout the years but for me, that’s more for composition,” McCraven said. “That’s really encouraged me to learn more piano and learn more bass so I can write music for an ensemble.” As a composer, instruments such as the piano and bass help him write for melody and harmony in a way that is difficult to do from the drums.

Despite the wide range of instruments he plays and his genius on the drums, McCraven feels in all honesty he is a master at none.

“Mastery is an endless journey with no arrival point,” he remarks, “I think that’s the beautiful thing about working in an industry like this you are continuously chasing this fleeting mastery and there’s always going to be another place for you to grow.”

Perhaps it is that thought process that fuels his ever-growing need to continuously learn, practice, rehearse and push the boundaries of music in every traditional sense.

McCraven, ever the workaholic, is currently on tour for his latest album “Universal Beings,”  which was named after a conversation with a fellow bandmate.

“We were just talking about music and life and helping fellow man and helping yourself, the balance between that and the universality between people,” He recalls. “One of the musicians just said something about being a universal being and I just thought it was a great title.”

There’s upcoming shows in New York, Chicago, Barcelona, Zurich and more. The band often tours more internationally due to the fact that the European market is usually far more accommodating for jazz, both traditional and progressive and often offers a lot more support in government subsidies for the arts.

Touring internationally definitely has its perks. McCraven recalls the first time he ever played in London. He received an amazing response from the audience.

“We showed up in London and there was just a line around the block,” said McCraven. “I was signing autographs for almost 40 minutes after the show.”

“That happens more now, but every time I go to London it has such great fans and energy. So many young fans are into this kind of music,” recalls McCraven.

Touring internationally offered a culturally rewarding experience for both the band and the fans.

“Travelling with a bunch of young, black musicians from Chicago who have grown up with different access to opportunity, their understanding of the world is very unique and strong,” McCraven remarks. “To be able to travel and see the world like that, a lot of musicians have the opportunity to reach across boundaries and borders.”

“We take in a lot and bring a lot back with us. It’s an incredible opportunity to learn about the world and then we pull that in and take everything that we have and give it back,” he says.

“We can speak to each other in the abstract realm, especially with instrumental music where I’m not saying anything to you, but we’re all feeling something together.”

When he’s not on tour, McCraven comes home to his wife and two kids in Chicago where he’s lived for the past 13 years. He attributes their presence in his life to the much-needed feeling of being grounded in an industry that’s known for often being tumultuous. It’s that reason why he never truly stops working.

“Watching my parents, I always say there are really high points to music but there are really low points as well,” said McCraven. “The music industry is a challenge so I always work like tomorrow I have nothing, you’ve just gotta keep grinding.”

The true goal of all of this, beyond working a career he’s passionate about, is fulfilling the American dream. To one day send his kids to college, and retire without touring well into his 70’s hauling touring equipment to and from.

Financial and economic security in the music industry is notorious for being hard to achieve unless you are at the top echelon of your field.

McCraven himself is no stranger to turbulent reality of the music industry, he’s played everywhere from an arena with “12,000 people to a weird funeral in the Southside of Chicago to weddings, corporate events and even a players ball where I played at a party for a bunch of pimps.”

McCraven’s talent is hard to ignore in his work. From the dress rehearsal where he works individually with every member of the ensemble, to the concert itself where the audience stood rapt with awe as his hands flew across the drum set at an inhuman speed, his drum sticks a blur against each beat.

“Maybe it’s hard to describe with the literal word but with the language of music we can communicate with each other,” remarked McCraven. “We can speak to each other in the abstract realm, especially with instrumental music where I’m not saying anything to you, but we’re all feeling something together.”

You can find upcoming concerts for McCraven and his ensemble here.