Running a presidential campaign that seeks alternative solutions to our country’s complex problems, Yang has made it clear that he has a definitive plan. 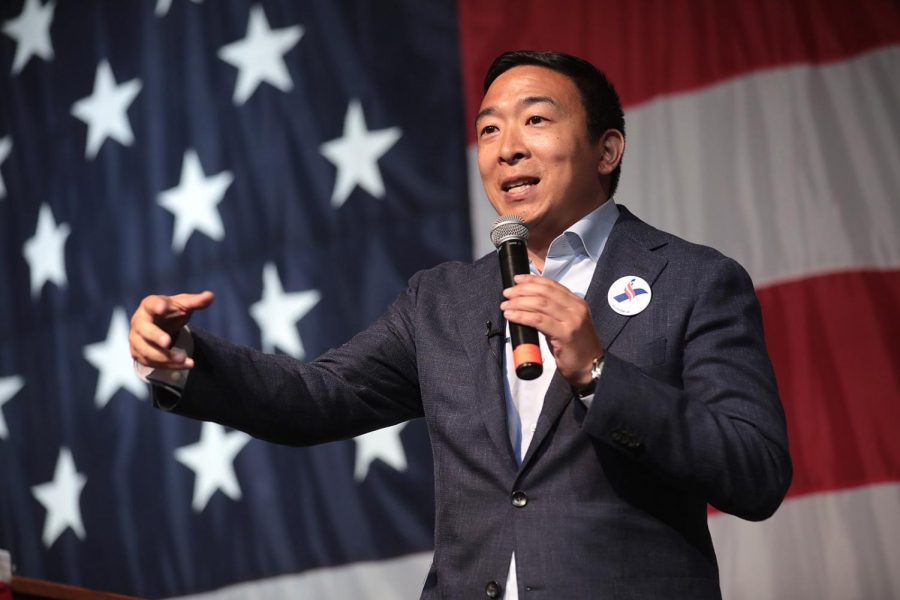 With four Democratic presidential debates in the books, there is still no front-runner for the nominee. While Joe Biden, Elizabeth Warren and Bernie Sanders grapple for the top spot, 16 other candidates have refused to back out of the race and continue to fight for campaign contributions and the media’s spotlight.

Out of the 19 candidates struggling for the nomination, many have failed to stick out. Candidates either attack one another on a personal level for not having a plan for an issue that is progressive enough or they pander to their respective bases, not appealing to the American people as a whole.

That is, everyone besides presidential candidate Andrew Yang.

Recently, Yang has surged in the polls, leading prominent Democrats such as former Texas Congressman Robert O’Rourke and New Jersey Senator Cory Booker. He is only two percentage points away from California senator Kamala Harris and Indianapolis mayor Pete Buttigieg, who have consistently polled at the fourth and fifth spots.

Yang is also very popular among his followers and supporters, which he has coined with the hashtag #YangGang. In public appearances and on social media, he comes off as the man one would want to have a beer with, funny and relatable yet concise, erudite and respectable.

He has qualified for every Democratic presidential debate thus far and has done so with flying colors, often doing so before many of the other candidates who do end up participating. Despite this, Yang gets far fewer media coverage than those who rank below him in terms of national polling and individual money contributions.

So, what gives? What’s so special about Yang and what does he stand for?

Yang was born in Schenectady, New York on Jan. 13, 1975. Raised by Taiwanese immigrants, Yang and his brother spent much of their early lives focused on education. Yang majored in political science and economics at Brown University, then got his law degree from Columbia.

In 2000, Yang created a website called stargiving.com, which sought to make donations to celebrity-affiliated charities. Although this startup failed in 2001, Yang wasn’t deterred. He went on to work for a test-prep company called Manhattan Prep, where he was named CEO in 2006.

After Kaplan bought the company in 2009, Yang became the founder of Venture for America, an organization that trains college graduates in entrepreneurship. Today, Yang still runs Venture for America but is simultaneously running to become the leader of the free world. Although he is focusing on several different issues, automation is his top priority.

“When Donald Trump got elected in 2016, I took that as a red flag that [the economy] was getting even worse, faster than I thought,” Yang said in an interview with CNBC. “And when I dug into the numbers, I was shocked to see that we’d automated away millions of manufacturing jobs in the swing states that Trump won.”

Yang’s signature proposal to fight automation of the workforce is known as universal basic income, or as he likes to call it, “the freedom dividend.” Implementation of his idea would include getting rid of a majority of, if not all, welfare systems in the U.S. such as SNAP and social security, for an opt-in program that would give every American citizen aged 18 and older to receive $1,000 a month from the government.

Many opponents of a universal basic income argue that it would take the value out of work and create a society dependent on a government check, but Yang and proponents believe otherwise.

“We’ll start more businesses. We’ll be able to change jobs more easily. So, the money doesn’t disappear in our hands—It creates a trickle-up economy from our people,” Yang exclaimed in an interview with CBS.

While Yang agrees with most Democrats on a number of issues, his solutions differ greatly. He wants to provide incentives for companies that produce fewer carbon emissions and supports a carbon tax. He advocates for term limits, bipartisan campaign finance reform and having a White House psychologist.

Along with having novel stances in a Democratic race that has become a contest over who hates President Trump the most, Yang has given himself the reputation of the apolitical candidate.

“Not left. Not right. Forward.” has become one of the campaign slogans that indicates his disinterest in playing sides during a very hyper-partisan time in our country, something moderate and independent voters can surely get behind.

It may be unlikely that Andrew Yang gains any more significant traction moving forward, but the same was thought about former president Barack Obama during the 2008 election cycle. Energy, confidence, refusal to give up and no signs of slowing down are all qualities demonstrated by Yang and his team of dedicated campaign staffers.

He might just be the dark horse candidate America needs to push us in the right direction.