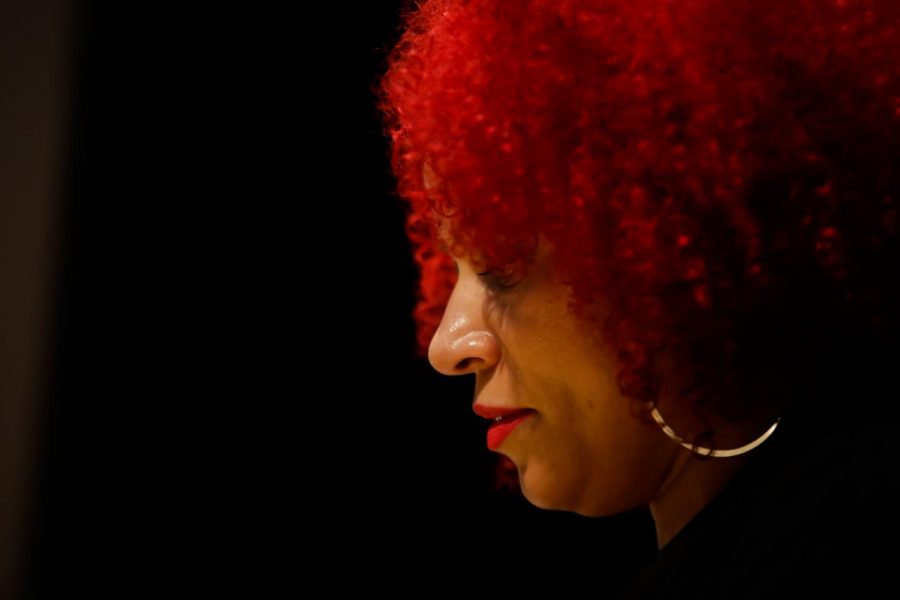 SPRINGFIELD — Andrew Grant-Thomas drove out from his home in Amherst with his two daughters and wife to hear Nikole Hannah-Jones speak about the racial achievement gap at the Springfield Public Forum, Wednesday evening. He came because he believes that school segregation is one of the largest knots holding back the country.

Grant-Thomas and his wife are the founders of EmbraceRace, a non-profit organization that helps support parents and teachers guide students around race.

“Amherst is relatively well-integrated by race and class, but there’s some data to show we have also seen a lot of white flight. So, the number of white students in Amherst public schools has gone precipitously down in the last 20 years. Amherst being Amherst, white flight ‘is not a thing.’ You know ‘it’s not about that’,” he retorts.

He is a fan of award-winning, investigative reporter Hannah-Jones’ work that does not shy away from illuminating historical truths often left out of student’s curriculum, and bringing light to the systems that have been perpetuated to lock people of color out—out from housing, wealth, opportunity and education.

“The desire to keep black people from education was a desire to control black people, and keep them on the bottom of the caste system,” said Hannah-Jones. “That same desire, I argue, exists today and is working rather effectively today.”

Hannah-Jones put up a line graph during her presentation that showed the country’s decline in school integration, which has reached a low since the 1970s. She challenged the audience to think about equality and the extent it exists in a country founded on racist ideals, where selfishness and lack of awareness will often be at the cost of children that do not look like their own.

She notes the eyes of a majority that often looks away, recalling that they “did not realize what was happening” as they move from a diverse inner-city to an almost all-white suburb.  Hannah-Jones lays it out clearly: it doesn’t matter what your intentions are, or the people you claim to be friends with, your actions are what speaks, often for generations to come.

Despite a variety of programs that Hannah-Jones outlined during her talk such as America at Risk, Race to the Top and charter schools, she said school integration is still the best solution to reduce the achievement gap.

“I want to be clear. There is nothing about white kids that makes black kids or Latino kids smart, but what’s inputting black and Latino kids with white kids ensures is that we get them the resources we always ensured were reserved for white children,” she said.

Growing up, Hannah-Jones was bused to almost all-white schools as part of a voluntary program of desegregation busing. Her experiences and the experiences of others like her fueled her passion as a journalist, work that would lead to the architecture of New York Times magazine’s “1619 Project” that re-examines slavery in America.

The title is named after the year when the first enslaved African’s arrived in the country and examines the four centuries of American history following. Much of her other work focuses on the achievement gap caused by segregation, desegregation and re-segregation in this country.

“These two school districts, and I could have picked any number of the districts surrounding Springfield, look remarkably different in one community. One is nearly all black and Latino. One is nearly all-white. One nearly has the lowest rate of poverty in the state (by percent) and one has the highest rate of poverty in the state. All sitting right next to each other, all serving children who I would hope to be a part of one community,” she said.

Hannah-Jones highlights Springfield as being one of the first cities to desegregate in Massachusetts, the predecessor of the Boston court ruling. Yet, unlike Boston, Springfield had limited resistance. The city adopted a plan that placed one private-integrated school in each of the districts, which bused both black and white children in much shorter distances than what was usual.

“It was actually very successful. Within one year of adopting the new program, the percentage of segregation of black children in some cases [were cut] by half,” she said, before teasing that she would tell the audience to give themselves a round of applause, “but you know what happened after that.”

During her talk, she points to an image of Ruby Bridges being escorted out of her school by US marshalls, as a means of protection. Following, she shows a picture of others who were in that white mob besides racist men: white mothers objecting to desegregation, specifically one carrying a casket with a black baby doll in 1960. 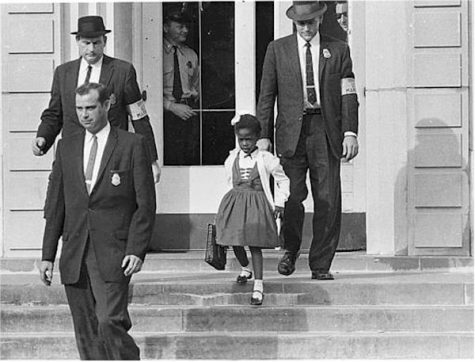 The same idea is reiterated by white mothers that move their white children to the nearby town, bringing adequate resources and instruction with them.

Hannah-Jones herself was faced with the issue of where to enroll her daughter in New York, where she could choose “a segregated high poverty school or a high resource” one. Her decision to ultimately send her daughter to the underfunded school is discussed in her article, “Choosing a School for My Daughter in a Segregated City.”

She asked the audience, “whose children when we are saying ‘I would never do that to my child,’ are we willing to sacrifice? Whose children are not worth the education that we have fought to get for our own?”

Hannah-Jones also showed two images of a classroom, a segregated one in the 20th Century and a classroom today. “You don’t get to play the mantle of integration and equality when you think about the past, but sustain segregation inequality right now in your own right side,” she said. “Choose your side, but that’s the side you would have been on back then too.”

Yessica Alfonso is a former student in the Springfield Public School System and part of a program called ProjectCoach where she teaches elementary school kids after-school in the north end of Springfield.

“It’s mainly segregated, so kids who grow up in poverty or are on the streets,” Alfonso said. “We thought we would come and support, and ask questions of our own.”

She came to the event after she heard of Hannah-Jones’ work and wanted to support what she was doing.

“The majority of schools in Springfield are segregated and we don’t even know it,” said Alfonso. “I grew up here and I didn’t even know my schools were segregated. I just thought it was normal and that’s a problem. I think the awareness is needed.”

The last question of the night came from a Springfield high school student: do you think in the future that there will be a time where all schools will be integrated?

“With that said, you have to dream a future that you don’t think is possible. Students ask me a lot ‘what should we do?’ I always tell them don’t look to the adults who have already failed you once to give you the road-map what to do… What I’m going to say is I don’t think we will do it, but if we do it will be because of kids like yall,” she said.