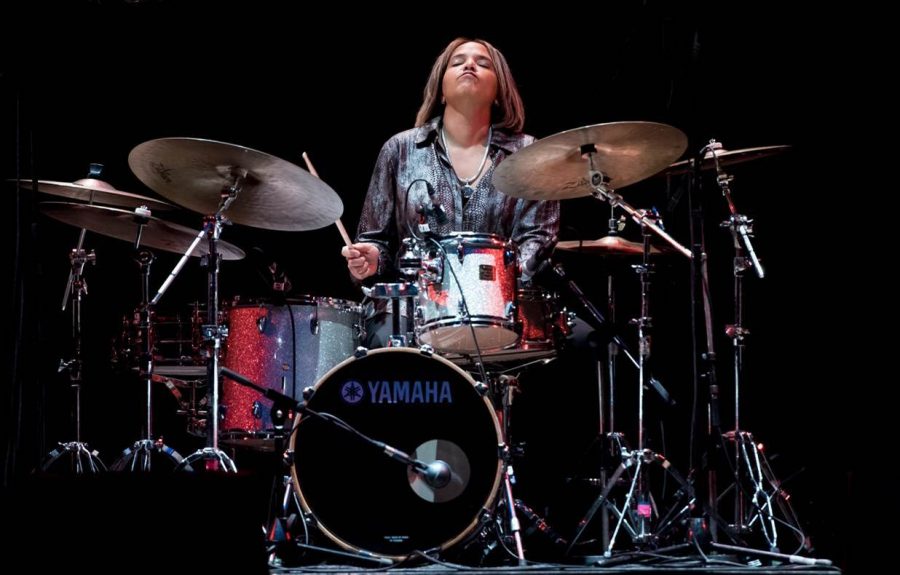 Carrington at the kit/John Watson

Before her Bowker Auditorium concert on Oct. 24, jazz drummer Terri Lyne Carrington arrived in the Hotel UMass lobby to discuss her life, upcoming works and how systems of oppression are keeping society down and hurting jazz.

While other kids were riding bikes and playing tag, Carrington, a native of Medford, was playing drums with jazz legends Bebe King and Dizzy Gillespie by the age of 10. By 11 she was awarded a full-ride scholarship to Berklee College of Music in Boston, where she is currently a professor.

Moments before her rehearsal, Carrington reflected on her overflowing career as she sat in the corner of the hotel lobby. House drummer for “The Arsenio Hall Show,” the first female artist to win the Best Instrumental Jazz Grammy and playing with legend after legend check only a few boxes on Carrington’s laundry list of accomplishments.

Success wasn’t always easy for the jazz drummer. After her first album in 1989, “Real Life Story,” Carrington struggled to get an album produced. While drumming for “The Arsenio Hall Show” and subsequently “Vibe TV,” hosted by Sinbad and produced by Quincy Jones, Carrington sent out demo after demo with little success.

Yet, after her career blossomed beyond belief, Carrington’s standout moments honed in on what helped others. In October of 2018, Carrington founded the Institute of Jazz and Gender Justice at Berklee College, whose advisory board features civil right’s leader Angela Davis. Carrington’s obligation to gender justice does not stem from personal experiences but of awakened awareness of the issue.

When female students confided to her about their personal industry struggles, Carrington confronted an issue that continues to hang over jazz; where are the women?

She was fortunate to have her father in the industry and commends her “strong personality” and “being one of the guys” to avoid any inappropriate advances.

“I had ownership in the music business from a child on, that’s the difference between feeling like there’s this group or this club and you’re being invited into it or if you’re feeling ‘This is my club!’  I feel like there’s a lot of women who feel like that,” Carrington said.

Her dedication to destroying patriarchal structures within jazz branch out into society. The political emphasis on Carrington’s career is clear, especially in her upcoming album, “Waiting Game,” out on Nov. 8, 2019. “Bells (Ring Loudly)” and “Waiting Game” are the first two songs on the album and are about police killings and the 2016 election respectively.

This isn’t the first time political themes have found themes tangled in Carrington’s compositions.“Money Jungle” Provocative in Blue,” inspired by an album of the same name made by Duke Ellington and longtime UMass Amherst professor Max Roach, focuses on the negative impact of capitalism. Carrington felt the album was “ a calling.”

“I mean capitalism is a part of the big system in our life. Patriarchy, capitalism it’s all these systems of oppression. Racism, most of that stems from capitalism too,” Carrington said. She believes that perhaps there is a gentler softer form of capitalism out there if people are willing to give up something.

What would Carrington give up? While she does not claim to be rich, Carrington has a nice five-bedroom home and BMW, that “in a heartbeat” she would trade-in for a “two-bedroom studio and a whatever car.”

Capitalism and its oppressive effects have not left Carrington stuck inward but looking outward. In her next album “Waiting Game,” Carrington is not the leader by a collaborator. Aaron Parks, Matthew Stevens and Carrington combined forces after a series of gigs and the 2016 election left them “a little bit more awake.”

“I think it made everything more urgent because we were all ready to coast a little bit thinking that Hillary was going to win,” Carrington said. She surmises that “in some weird twisted way” Trump’s election forced people to come together.

“Waiting Game” marks Carrington’s first album as a collaborator, a role she relishes. “I think it can bring you higher,” she said.

“There’s a point where you reach your Prince in Purple Rain,  your creativity gets to a point and then you really need to bring in outside ideas to help move things along,” Carrington said.