Museum hopping in Amherst: three of the best museums to visit in a day 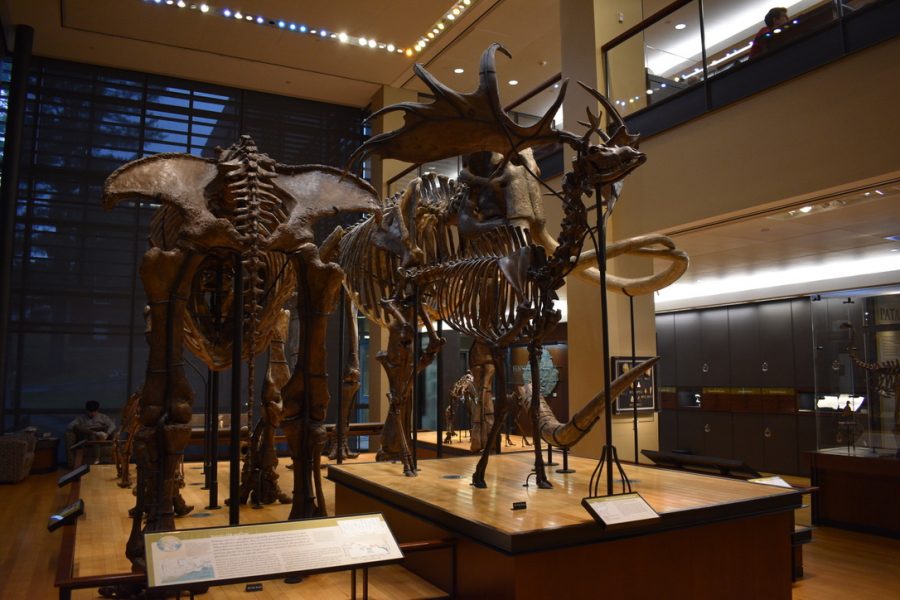 From picture book caterpillars to prehistoric dinosaur footprints, the town of Amherst, Massachusetts offers museum-goers a wide range of exhibits for a variety of interests. Whether you find yourself a history buff, an art enthusiast, or grew up reading “The Very Hungry Caterpillar,” there is a museum for you to explore in Western Massachusetts.

The Beneski Natural History Museum, the Mead Art Museum and the Eric Carle Museum of Picture Book Art offer collections that are unique to the area. World-renowned exhibits such as the Hitchcock Ichnology Collection, one of the largest dinosaur track collections in the world, can be found on the Amherst College campus.

An ancient Roman sarcophagus lies at the Mead, which is also on the Amherst College campus. Visitors can view collections of illustrations from esteemed picture book artist Eric Carle on the campus of Hampshire College. These three museums are accessible to a variety of ages and can be visited in the span of a single day.

The Beneski Natural History Museum has been a part of the Amherst College community since it was built in 2006. With more than 1,700 specimens on display and receiving a combined 40,000 visitors per year, the museum is intentionally designed to tell a story of the area’s geological history. Whether that be through fossils of creatures long extinct, or meteorites formed in space, the museum welcomes people of all ages to learn more about the processes of time that have shaped the planet. 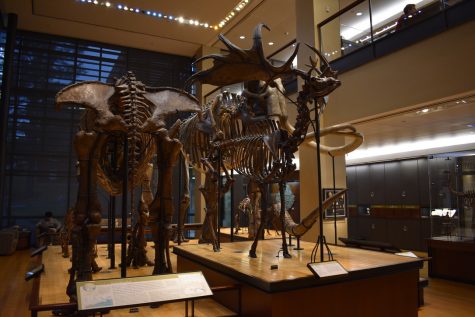 “From two to literally 102, we get a wide range who come in for different reasons,” said Alfred Venne, the museum educator. He also said the museum does not rely on marketing to attract visitors.

Geology faculty, with the help of architects, designed the building with an “intentional vision.” The building works around three main themes that tell a story of the history of the area. The first theme is extinction, in that the museum focuses on how these extinctions happen through geological forces that shape and change the planet.

By showcasing collections donated from students, alumni and faculty, the museum also depicts the history of Amherst College, which is the second theme the building is designed around.

The third theme is that the museum displays local geology and natural history of the area.

The foundation of the museum can be traced back to the Appleton Cabinet, built-in 1855 on the Amherst College campus. The lower level of the building displayed Edward Hitchcock’s ichnology (the study of fossilized tracks and traces of organisms) collection. Hitchcock was a professor of natural sciences at the college, as well as the college’s third president. He collected around 1,200 slabs of rock that contained tracks, studying over 10,000 marks on these slabs and cataloging his findings.

A 13-year-old farm boy discovered the first slab in Hitchcock’s collection as he was plowing a field in South Hadley. His discovery was the first-ever recorded dinosaur footprints in North America. At the time, in 1802, there was not even a word for a dinosaur. 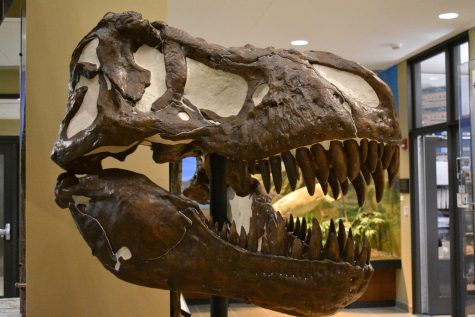 “These dinosaur tracks were studied by Edward Hitchcock six years before the word dinosaur was coined,” Venne said. In fact, the word “dinosaur” was not coined until 1841.

Today, visitors can find the tracks on the lower level of the museum.

The museum is free admission for all and operates Tuesday to Friday from 11 a.m. to 4 p.m. and Saturday and Sunday from 10 a.m. to 5 p.m.

Located just a few steps away from the Beneski Natural History Museum is the Mead Art Museum, named after the famous architect William Rutherford Mead who graduated from Amherst College in 1867. The museum is much older than the Beneski Natural History Museum. Built-in 1949, the museum has been exhibiting art for visitors and students of the campus free of charge. The museum currently has eight galleries, with permanent and rotating exhibits from all over the world. Collections range from Mexican ceramics to Tibetan scroll paintings and West African sculptures. 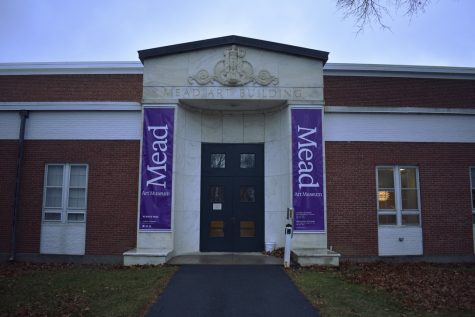 The Mead is not just a museum. It also allows those interested in pursuing more information about the artwork to have a chance to use the museum as a research center. Visitors looking to view art that is not currently being exhibited can search the Mead’s database. The work is then available to view by appointment.

They also offer “Saturday Close Looks,” in which visitors can explore art with student museum educators. 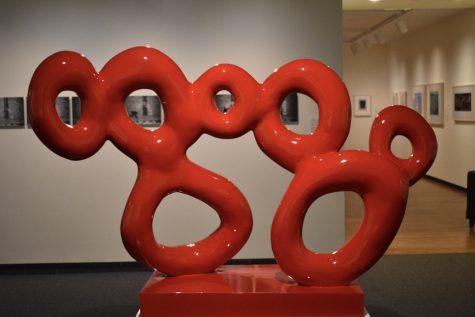 If you are at the Mead, be sure to view the “Amherst Panels,” the remnants of decorated ceremonial halls of an ancient royal palace of Nimrud, Iraq. Built in 879 B.C.E., these reliefs depict king Ashurnasirpal II. The giant alabaster reliefs span from the floor to the ceiling, commanding the attention of the room. It was the same Edward Hitchcock of the Hitchcock Ichnology collection who helped to acquire these reliefs for Amherst College. Hitchcock had studied the work of Austen Henry Layard, a British diplomat and explorer and the first to excavate Nimrud in 1845.

The Eric Carle Museum of Picture Book Art is located on the Hampshire College campus in Amherst, where it has been operating for 16 years as a space to instill a love and appreciation of picture book art. Welcoming 50,000 visitors a year and housing 7,300 permanent collection illustrations, the museum is separated into three art galleries, an auditorium, a gift shop, a reading room library, an art studio and an outdoor nature space known as “Bobbie’s Meadow.”

The inspiration to build the museum came to Eric Carle and his wife Bobbie Carle while they were visiting Japan on a book tour. It was here that they discovered museums of children’s picture book art.

Since it opened, more than 100 exhibitions have been shown at “The Carle.” 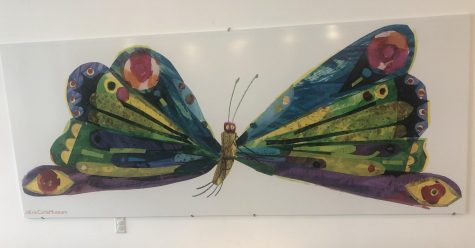 “It has been said that picture books are an introduction to literature for young children. We also wanted to introduce our youngest guests, so new to museums, to the joys of looking at art,” reads a quote from Carle, displayed on one of the museum’s walls featuring a timeline of Carle’s life.

“Picture books bring people together,” said Sandy Soderberg, the museum’s marketing manager. All ages are welcome to visit and experience the illustrations the museum displays, whether it is in the art galleries or the library.

The library works as the “living room of the museum,” where visitors can browse among the 4,000 books that are categorized by an illustrator.

Working as an interactive space for all ages, the museum also has an art studio that is always free to the public. The theme of the art studio usually coincides with the rotating exhibits. Right now, as “Under the Sea with Eric Carle” is being exhibited, the art studio is full of children’s paper jellyfish hanging from the ceiling.

In the west gallery, Carle’s illustrations always have a home. This specific gallery is dedicated to displaying Carle’s work, although the themes change. As his sea creature illustrations currently fill the room, a little boat that operates as a reading nook for children sits in the center. There are also “shell phones,” which children can pick up and hear ocean-themed jokes.

The central gallery currently displays the artwork of William Steig in an exhibit titled, “William Steig’s Sylvester and the Magic Pebble: A Golden Anniversary.” Steig was also the original author of “Shrek!” published in 1990.

The east gallery’s exhibit is currently showcasing “The Pursuit of Everything: Maira Kalman’s Books for Children.”

“Picture books can be mirrors or windows,” said Soderberg, explaining that they help to reflect on our own world, as well as seeing the outside world more clearly.

Aside from displaying illustrations, the museum also runs many programs and events, workshops and classes and professional development.

Visit a museum in Amherst today to immerse yourself in the local history and art of your community.