Chief Keef drills his influence into the culture and Kendrick Lamar and Drake jostle for the throne. 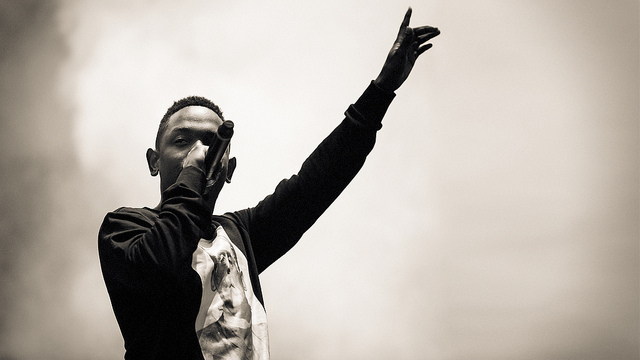 2012: Chief Keef drills his influence into the culture

Chicago rapper Chief Keef is a trailblazer. In a 2012 interview with Redeye Chicago, Keef mentions how he steers clear of metaphor and punch line use because it’s “doing too much.” It wasn’t what he could do with a pen that appealed to his fan base, but instead, it was his rawness and realness. How he moved in the streets was just as important as how he rapped in the booth, with every moment of trouble with the law adding to his star power.

The then 16-year-old…I mean 3-Hunna-year-old put the Chicago based gangsta rap subgenre, drill music, on the map with his breakout single “I Don’t Like.” The Young Chop produced track is as equally menacing as it is catchy with Keef listing what he doesn’t like with such repetition that by the second verse it’s pretty easy to rap along to even if it’s your first listen.

The track got so big that it garnered the attention of hip-hop’s alpha dog and fellow Chicago native Kanye West, and was remixed by him and the rest of the GOOD Music crew. By the time of Keef’s debut album “Finally Rich” in December 2012, the drill music prodigy was already looked at as a hip-hop star.

When “Finally Rich” sold 50,000 copies under Interscope, many were quick to label Keef’s raw, minimalistic lyrical approach an utter failure, but those numbers only tell half the story. Like Steph Curry if he played before the three-point line, Chief Keef’s impact couldn’t really be seen because music streaming was years away from being counted as album sales. His fan base was listening, just not buying hard copies. Nonetheless, his influence is undeniable.

If rappers could copyright adlibs, Chief Keef would be an even richer man. He was making onomatopoeia adlibs like “bang!” and “bih!” sound cool before artists like Playboi Carti and SmokePurpp had a name in the industry. He was king of the “ayy!” flow before everyone from Kendrick Lamar to Lil Pump used it in the latter half of the decade. In many ways, Chief Keef is the catalyst for this new wave that many diminished as mumble rap.

When Kendrick Lamar released his major-label debut album  “good kid m.A.A.d city” under Interscope and Aftermath in 2012, discussions on how soon an album could be labeled a classic sparked all over the hip-hop blogs and message boards. The consensus was that “good kid m.A.A.d city” was truly something special, flawless even, but many “is it too soon?” articles came in reaction to the praise Lamar was receiving.

In an era where music, trends and even rappers themselves are here in the spotlight one day and gone the next, the word “classic” isn’t a word that can just be thrown around. The ultimate test of what is and is not a classic is time itself, even if it’s seen as a masterpiece the moment it’s released. How does the album grow on aged ears?

In the seven years since the release “good kid m.A.A.d city,” the album has aged like wine. Just this past September, it surpassed Eminem’s record for the longest charted hip-hop album on the Billboard 200 and the album sounds just as groundbreaking in 2019.

Never before had I heard a concept album that tells its story out of order like “Pulp Fiction.” Never had I heard an album that felt quite as cohesive conceptually without sacrificing how sonically pleasing each track is on its own.

What makes “good kid m.A.A.d city” a classic in my eyes is it’s replay value. Of the album’s 12 tracks, nine are unskippable every single time I listen. I have to hear the polished hook on “B****, Don’t Kill My Vibe.” I have to hear the breathtaking rap mechanics and verbal acrobatics on “Backseat Freestyle.” I have to hear Jay Rock devour the beat on “Money Trees” like it’s his last meal. I have to hear the flawless storytelling and shifting of perspectives on “Sing About Me, I’m Dying of Thirst.”

The coming of age story that is “good kid m.A.A.d city” was just the beginning of what’s been so far an untouchable run of studio albums from Kendrick Lamar, setting the bar high early in his discography.

2013: Drake claims the crown and “Nothing Was the Same”

Drake’s 2013 album “Nothing Was the Same” showed the Canadian MC at the peak of his powers. As I went through his catalog in preparation for these decade pieces, this is the project that had the Goldilocks “just right” feeling to it. Sonically, there’s an ideal balance between moody singing and chest-puffing raps. As for perspective, with “Nothing Was the Same” being his third straight No. 1 album, Drake was no longer the insecure underdog with something to prove, but he wasn’t yet the style stealing, streaming giant boggled down with paranoia from protecting his throne. This presented Drake in his most likable form, which is likely the reason why “Nothing Was the Same” received the highest Metacritic score in his catalog of official studio albums.

On the intro track “Tuscan Leather,” no longer does it feel like Drake is attempting to convince both himself and the audience that he deserves his spot in the industry by overcompensating. His confidence (likely a result of the two commercially successful albums before it) shines through with every bar of the hookless six-minute track. Lines like “Degenerates, but even Ellen love our s***” and a few bars about dominating the radio waves show signs of self-awareness and acceptance that weren’t there in previous projects.

Drake is at his best on “Nothing Was the Same” when creating his version of “Mo Money, Mo Problems,” addressing the issues in his life popping up as his star power increases. “Too Much” reads as an open letter to his family in response to the distance building between them. This isn’t just surface-level vulnerability Drake like what you might hear in some of his (place woman’s name here) “do you still think about me” tracks; he dives to depths of vulnerability that he hasn’t really reached since.
“Guess since my text message didn’t resonate, I’ll just say it here

Hate the fact my mom cooped up in her apartment, telling herself

That she’s too sick to get dressed up and go do s***, like that’s true s***”
On “From Time,” Drake practically paraphrases “Mo Money, Mo Problems” when he says, “I like when money makes a difference but don’t make you different” followed by a few lines of longing for a past life. Many of Drake’s biggest haters like to poke fun of his sensitivity, but I think when it felt it was coming from a place of real emotion, Drake was absolutely at his best.

In a 2013 review of “Nothing Was the Same” by the hip-hop critiquing YouTube channel Dead End Hip-Hop, one of the reviewers said, “Who are you going to compare to him [Drake], other than himself.”

Because of Drake’s abnormal path to the top of the rap charts (exposure to fame before picking up a mic) and somber, “808s and Heartbreaks”-off-antidepressants-like ballads, Drake can only be graded in his own vacuum. Because of this (and a few lackluster tracks here and there), I find it difficult to see “Nothing Was the Same,” or any other Drake album for that matter, being looked at as a hip-hop album classic. But for a pop/rap/R&B hybrid that churns out hits in a singles era like…really only himself, this shouldn’t matter.

While it’s not a classic, “Nothing Was the Same” is Drake’s best foot forward in delivering a full-length album. This doesn’t mean that it’s his Drakiest album; the dreary croon-rapping on tracks like “Shot for Me” and “Marvin’s Room” and the now-iconic cover art have forever etched “Take Care” into my mind like a signature from Aubrey himself. “Nothing Was the Same” is Drake’s best project because it was the last time he truly pulled back the curtain to his throne room, and as only he could, makes it sound depressing as hell in the process. This is the last time where Drake seemed like a tangible human being before the plexiglass barrier built out of ghostwriter allegations, paranoia and overexposure to the spotlight.

Pitchfork said it best when they described “Nothing Was the Same” as a “self-fulfilling prophecy.” Now six years later, this album reads like an artifact showcasing Drake’s life just before reaching untouchable levels of success and fame. Everything from Drake since hasn’t felt as genuine, with each song feeling like an attempt at recreating what he’s already done, stealing of styles, or a spritzed and scrubbed version of the truth. Truly, “Nothing Was the Same” after Drake claimed the commercial throne for good at the cost of his soul.

While “Nothing Was the Same” is one of the most pivotal albums in Drake’s career, it didn’t exactly shake things up like that verse. That verse, the verse that froze hip-hop. That verse that shook hip-hop to its core.

In this verse, Kdot thrust himself into the greatest of all-time discussion with JAY-Z, Nas, Andre 3000 and Eminem; name-dropped just about every relevant rapper in the track including Big Sean and Jay Electronica; and raised the bar for competition in rap.

The impact of the verse was felt the moment it dropped:

Jay Electronica and Big Sean’s verses were immediately rendered irrelevant. Both artists showed signs of saltiness after.
Lamar’s verse elicited a response from just about anyone who is anyone in hip-hop circles at the time.
A Cold War between Lamar and Drake was ignited. Drake claps back subliminally on “Nothing Was the Same” with “The Language,” which was the first of endless subliminals sent back and forth between the two for the rest of the decade.

Kendrick’s state of the union address on “Control” grabbed hip-hop by the throat. After releasing his instant classic “good kid, m.A.A.d city,” the “Control” verse was the declaration that solidified the “Kendrick Lamar, best rapper alive” narrative after he spoke it into existence.

2012 and 2013 set in stone a new hip-hop hierarchy and laid the groundwork for the new sounds of hip-hop to come. While Kanye West didn’t show signs of slowing down, it was clear that the crown sat at the top between Drake and Kendrick who stared at each other from the castles they built just three years into the decade.