Judging Books By Their Covers: “Milk and Honey,” remains a poetic masterpiece 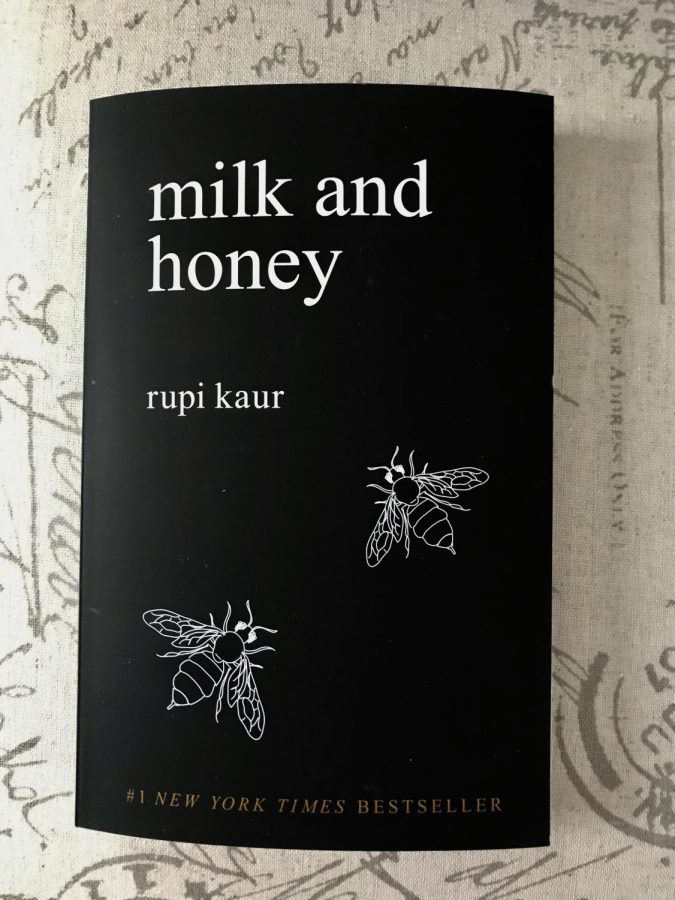 “Milk and Honey,” Rupi Kaur’s self-published debut poetry collection, quickly rose to The New York Times bestselling list upon its release in 2014. Her work thoroughly revolutionized modern-day people’s concept of poetry; a genre that is arguably becoming obsolete. Kaur’s “Milk and Honey” changed that. Not only has the raw emotion and captivating imagery in her poems proven the cathartic power that expressing thoughts through an obscure form can have, but also that poetry is still very much relevant to the 21st century.

The cover is strikingly simple, making it easy to overlook when perusing a bookstore for new reads, but it captivates your interest from the moment you read the first page until the very last. When Kaur made an appearance on “The Tonight Show with Jimmy Fallon” to promote her second book, she explained how because she self-published “Milk and Honey,” she had total control over the design process. The black and white theme appears to be purposeful because the pages bleed an array of colors as the poet purges her soul’s bearings. To further add significance to pieces of her story, Kaur includes hand-drawn illustrations. Composed of slightly over 200 pages, it is mixed with a sound variety of both long and short pieces of prose.

The poems are separated into four chapters: “the hurting,” “the living,” “the breaking,” “the healing.” Similar to other forms of art, poetry is both subjective and intimate. Each of her poems have a purpose and message, for herself, but also her audience. As she poignantly discusses haunting and beautiful experiences that she has faced and in some cases, overcome, she subtly encourages readers to glean from her experiences.

The first chapter, “the hurting,” delves deep into the traumatic events that shaped Kaur’s childhood. One theme that arises quickly is the premise of sexual assault, and how women are often seen as nothing more than objects to be taken and manipulated by men. She illustrates this by detailing both personal experiences and in approaching the concept as a whole. Another image that appears at several junctures throughout her story is her distrust of men in her life. Whether that be a result of unfortunate familial events or just a mere reference to the position that society forces women into, makes her mistrust of men that she encounters a point of unrelenting discussion as she grapples with how to cope and move forward.

Throughout the second part, we encounter Kaur as she embarks into “the living.” The timeline of the entirety of her journey is difficult to discern, but I would describe the mentioned themes as aligning with that of adolescence. She elaborates on her first encounters with love, in many of its forms, heavily focusing on the romantic aspect. This puts the title into context because there are seldom things aside from being in love that can make you feel more alive. Except, when it is built upon self-destructive behavior.

In the third chapter, “the breaking,” we witness further instances of Kaur’s self-destructive behavior as she crumbles apart at both the hands of others and that of herself. This chapter is among the hardest to read, due to visceral language that she uses and the overarching theme of love lost. Anyone who has gone, or is currently going through an excruciating heartbreak will find solace in her tears and moments of bitter anguish as she searches for acceptance from those around her.

The final chapter, “the healing,” allows readers to come full-circle in the journey that Kaur has taken us on. She expresses profound thoughts in terms of healing from past wounds, both personally inflicted and as a result of societal norms. In the few final pages, she professes sincere gratitude to the impactful role that poetry has had in her life. It is evident that writing her fragmented thoughts down was a very cathartic experience for her which translates to her readers.

As I leafed through my worn copy, I was struck, once again, by how it is such an accurate portrayal of the human experience. While the poems stagger in their approach to covering abstract or concrete concepts, they all intertwine to tell us this vulnerable story of what it feels like to be a woman growing up in this day of age. From abuse, love, loss, tragedy, and recovery to everything in between; these poems serve as milk and honey to soften the bitter taste of life. Because even though it might be a short read, the suppressed emotions that she voices will not fade from your memory easily.