Should UMass have a happiness general education requirement? Students discuss their thoughts

UMass students agree across the board that implementing a class on happiness and well-being would be beneficial. 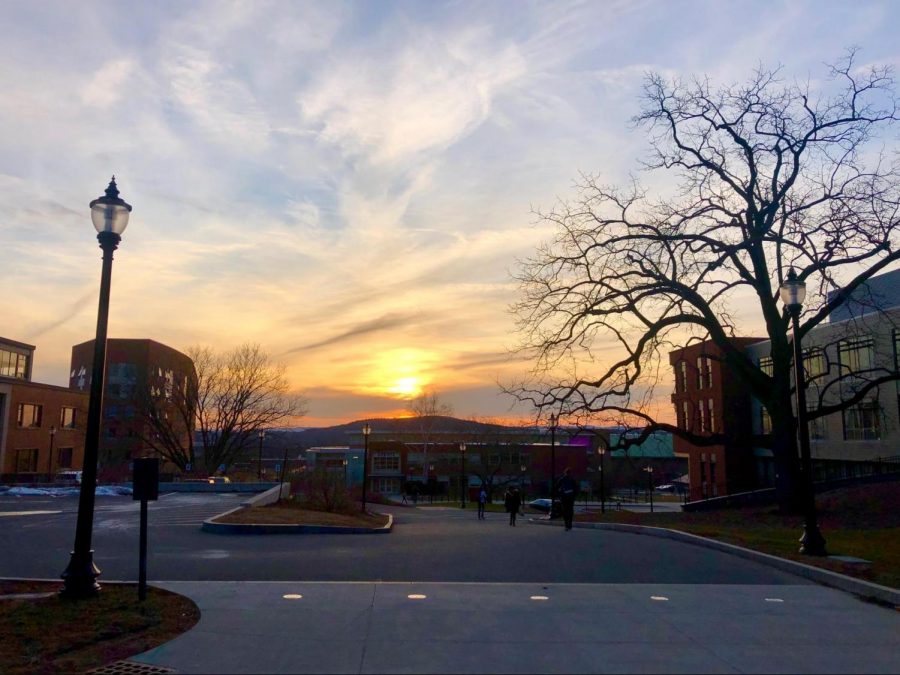 AMHERST- Imagine a class that you could earn credits for, that taught you how to be happy. That sounds crazy – right? For most of us, school has revolved around a sort of corporate demand that prepares us for the workforce, not teaching us how to live our happiest lives. However, in 2018 at Yale University, professor Laurie Santos developed a class called Psychology and the Good Life that focuses on just that.

Psychology and the Good Life quickly became the most popular class in Yale’s history. According to the Association for Psychological Science, the class is divided into two parts. The first half of the class focuses on what makes people happy in the long run, such as social connection and mindfulness, and why preconceived notions, such as money being the root of all happiness, don’t necessarily fulfill us.

The second half of the class works to apply what was learned in the first half by carrying out proven happiness practices, such as meditation, in students’ day to day lives through class assignments. This is where behavioral changes can make a real difference in students’ lives.

Santos, who is a psychologist and cognitive scientist, developed this class because of what she was observing on campus. As Head of Yale’s Silliman College, Santos explained at Aspen Ideas Festival that she was able to live on campus with students and interact with them in their daily lives. What she found was that many students were engulfed by stress that affected their happiness. As more and more studies came out across the nation about the mental health crisis seen on college campuses, Santos became positive she could create a class and even a movement by combining positive psychology and behavioral psychology.

According to PositivePsychology.com, positive psychology uses a scientific approach to discover how to build a happy life by focusing on strengths and human thoughts, feelings, and behavior. Behavioral psychology is widely known as the study of the connection between our minds and behavior.

Largely due to its success, Psychology and the Good Life is now offered as an online class on Coursera as, “The Science of Well-Being” and is open to anyone. The course description reads;

“You will engage in a series of challenges designed to increase your own happiness and build more productive habits. As preparation for these tasks, Professor Laurie Santos reveals misconceptions about happiness, annoying features of the mind that lead us to think the way we do, and the research that can help us change. You will ultimately be prepared to successfully incorporate a specific wellness activity into your life.”

What’s more exciting about this course being online is that it is offered for free, however, you can pay $49 to receive a certificate and graded assignments.

As great as this class being offered online is, should the University of Massachusetts Amherst incorporate its own happiness class into a general education requirement, which would not only allow students to earn credits but to benefit the overall mental health of students on campus?

On Sunday, I set out to interview students across campus about whether or not UMass would benefit from a happiness class for their students. The answers were consistent across the board, that yes, this class is definitely something UMass should consider implementing.

Joe Minton, a junior majoring in psychology on a neuroscience track, said that he believes students don’t know what makes them happy and that they think money will ultimately achieve happiness. He also said, “In general, mental health issues are on the rise, like consistently across cultures and the entire world, so I think that teaching kids and students that is so important.”

An article from Amherst Wire in 2017 by Amanda Levenson details why UMass, in particular, doesn’t have the best resources for mental health. Levenson specifically discusses high numbers of students hoping to seek help and a shortage in staff that can’t keep up with the demand.

More recently in October of 2018, the Daily Collegian posted an article by Jake Russian titled, “Mental health is a low priority at UMass.” Similar to Levenson, Russian writes about abnormally long wait times for appointments at CCPH (Center for Counseling and Psychological Health) and a system that only allows up to five appointments per student. “The current system is a half-hearted attempt at claiming responsibility for the wellbeing of students,” he writes in his article.

Nadine Theberge, a freshman biology major, said that she believes everyone deserves to be happy and that’s why UMass should have this general education requirement. She said, “People might not know exactly how to achieve happiness especially if something happens in high school. College is a time to reinvent yourself and have a new start, so I think being happy is a good way to do that.”

Zoe Kim, a freshman who hasn’t chosen her major yet, agreed with her friend Theberge, saying that it’s a “pretty solid idea” for UMass to have a happiness class. She said, “I just think in general, classes tend to cause a lot of stress and anxiety for people so having one that just focuses on happiness and positive mental health is just a good thing to have.”

UMass does offer a variety of meditation classes and mindfulness classes at the recreation center, as well as some classes on positivity such as Engagement and Positive Psychology for STEM majors.

Many professors are also aware of the staggering mental health statistics on college campuses and have their students begin class with five or ten minutes of mindfulness. However, considering a general education requirement for a happiness class that teaches students about happiness and ways to implement those practices in their own lives could prove to be helpful for students campus-wide.