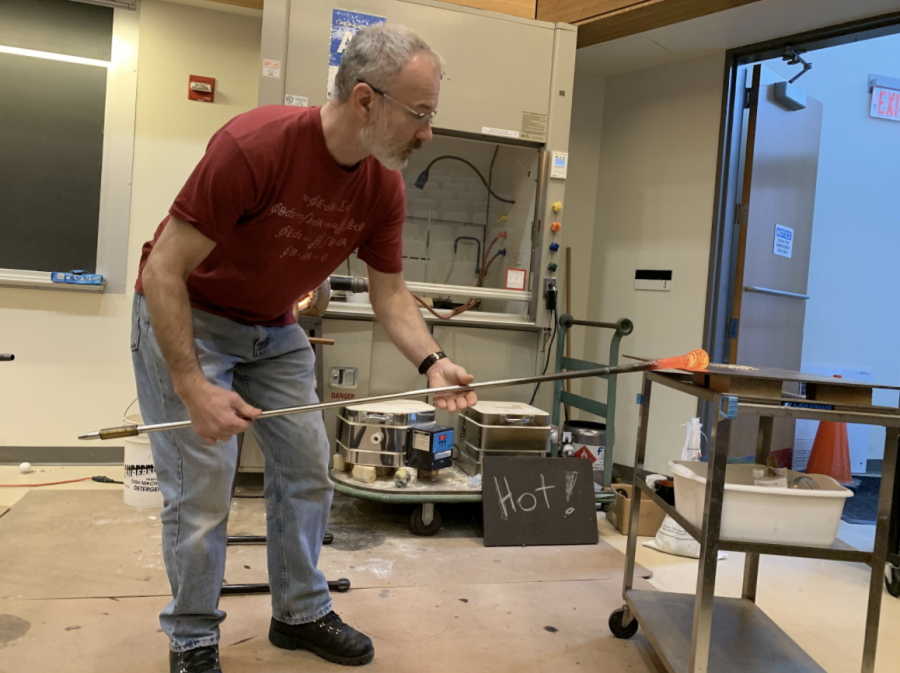 Fermann shapes a hot glass bubble into a globe with glass blowing jacks.

AMHERST—Justin Fermann, a chemistry professor at the University of Massachusetts, teaches a general education class that raises some eyebrows: Chemistry 103, The Science of Craft. This is one case where you don’t judge a book by its cover.

Spanning over 15 weeks in the fall semester, students are introduced to four different crafts: blacksmithing, ceramics, brewing and glassblowing. From there, students are then taught the chemistry behind those particular crafts.

Before most of the campus is up, students sleepily drag themselves out their dorms to attend their 8:30 a.m. class in lecture hall 135 of the Integrated Sciences Building. It is the same as most lecture halls where there are seats and a table and lab bench for the professor set up to teach his or her students.

However,  most professors don’t have a methane gas forge, kilns, blowpipes, a marver table, and an assortment of other glass blowing tools spread out in front of the class. On any given day, students will filter into the class and Fermann is already heating up glass that will be placed into a glass mold. He’ll start the class by introducing what the class will be learning about and what he is demonstrating, and then from there get into the lesson.

Fermann will have mini-demonstrations throughout the 75-minute-long class period. These demonstrations could be showing how a Prince Rupert drop breaks because it was not annealed properly or how light is refracted in a small fish tank aquarium. Ultimately, by Fermann showcasing these properties through demonstrations, students are better able to grasp scientific concepts through a visual perspective.

Each craft unit starts off with an in-class demonstration of the craft in action. During this day, according to Fermann, the students should be “critically engaged observers.” When students are observers, it probes them to ask questions about what is happening physically and scientifically during the demonstration.

Depending on the craft, students are given an option to create something, allowing them to get hands-on experience with any craft that they may be interested in.

A typical general-education requirement is a four-credit class at UMass. Fermann breaks down the grading of the class like this: three credits for the class lecture and outside work and one credit for the final project. Fermann says the science section is the gen-ed portion of the class, while the craft section he hopes motivates students to learn.

Before The Science of Craft, Chemistry 101 existed at UMass. Fermann took the class and flipped it on its head by creating a new and improved class from the ground up. Fermann says that Chemistry 101 was directed towards chemistry majors but was still a gen-ed requirement; whereas the Science of Craft is a gen-ed requirement designed and made for students who aren’t into science and technology.

“The science of craft is a physical science general education course designed from the ground up to meet general education needs- not the needs of chemistry majors, not the needs of biology majors or physics majors or people who are scientists, but the science, knowledge, and skills by people who are not going to go on to careers in science and technology,” said Fermann.

The Science of Craft is one of the most, if not the “most important class taught in the department,” according to Fermann. He believes that the class is designed for students where science is “beyond them.” From there, Fermann explained, “It has the most potential for the longest and greatest impact for people to understand science.” He hopes it will open up skeptical students to a more realistic thinking about other courses and the world because it is such a realistic approach to chemistry.

Fermann jumped through a few hoops before the class could be offered to students. He first had to advocate for taking responsibility for this proposed class. From there he built a curriculum. The curriculum was created with a group of upper-level science students he hired over the summer in 2011. These students, along with Fermann, learned each craft and figured out what scientific principles could be taught.

“The class is dedicated to answering questions,” said Fermann. Throughout the course of the class, students are pushed to ask questions about something they don’t know and want answers to. He notes that the questions are simple in the beginning and develop over time into more process-based questions. Questions are answered through experiments produced in class.

Since the course revolves around student questions, little bits of material in the course change to suit their learning needs and their questions.

Alex Coats, a social thought and political economy major at UMass, like most, took the class to fulfill her physical science requirement and said, “[it] seemed like it would be more creative, unique, and hands-on compared to other science classes.”

Coats described how she liked the set up the class, “I liked that demonstrations were a large part of our instruction. They allowed me to understand how the concepts we learned were applied. They provided a more concrete understanding of abstract principles. She continued by saying, “At the same time, I liked that the professor cultivated an environment where intellectual curiosity was encouraged.”

UMass is no stranger to peculiar gen-eds like Science of Craft. So the question is “how can I find an interesting gen-ed?” There a few ways students can go about this.

The first way is to dig through Spire based on what gen-ed requirement you would like to complete. But even if something seems interesting (and easy) based on it’s description, one can take astronomy, thinking it will be easy and end up in one of the hardest classes of their lives.

Another way to find an unusual gen-ed is to crowdsource. Many students are part of class pages on Facebook, eg: OFFICIAL UMass Amherst Class of 2022. Here, there are students who have taken gen-eds that were either a great class or did not make the mark. These groups create a catalyst for students to connect and help each other out.

A final method is going to your advisor. Your advisor can instruct you on what classes to take based on what previous students in your major have taken. They can also tell you how easy or difficult a class could be based on other students feedback, which in turn can help you figure out if a class if right for you or not.