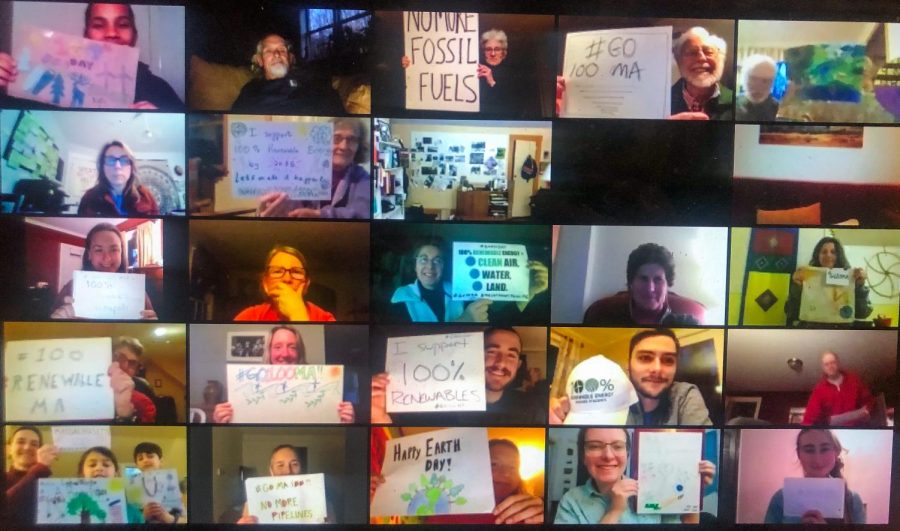 AMHERST – In honor of Earth Day’s 50th anniversary on April 22, MASSPIRG co-hosted a virtual celebration along with Environment Massachusetts and Climate Action Now to discuss 100% renewable energy in Massachusetts.

MASSPIRG is an independent, state-based, citizen-funded organization that is a member of PIRG, the federation of state Public Interest Research Groups. The UMass Amherst MASSPIRG Chapter began in 1972. Environment Massachusetts is part of The Public Interest Network. It’s mission is “to transform the power of our imaginations and our ideas into change that makes our world a greener and healthier place for all.” Climate Action Now is a grassroots, all-volunteer group, which advocates for climate justice movements.

Members of these organizations and other environmental activists planned to celebrate the 50th anniversary by marching through Massachusetts streets on Wednesday. However, due to COVID-19 and current social distancing guidelines, the event was held from 6:30 to 8:00 p.m. over Zoom, a video conferencing service. Approximately 140 people attended.

The celebration kicked off at 6:30 p.m. with a presentation featuring art made by children across the state depicting a world with 100% renewable energy. One drawing from an Amherst student contrasted how solar panels can be good for the environment, while fossil fuels can be harmful.

Introducing the event, Jenny Daniell from Climate Action Now said, “Tonight, as a community, we remember the importance of Mother Earth, and the imperative to quickly transition to 100% renewable energy Massachusetts, United States, and world.”

Daniell mentioned the importance of passing Bill H.2836, the Decker/Garballey 100% Renewable Energy Act, which address our climate emergency. Environment Massachusetts is responsible for authoring the bill.

Peter Schneider, Clean Energy Organizer from Environment Massachusetts expressed why this Earth Day celebration event and 100% Renewable Energy Act is important to him. “I think for me, what this event is about and what [the bill] is about is really giving hope to the younger generation, as well as my own generation,” he said.

Schneider then introduced Massachusetts Senator Jo Comerford who shared the history of what Congress has accomplished since the first Earth Day 50 years ago. She discussed The National Environmental Policy Act (NEPA) and The Clean Water Act, which both passed in the 1970s. Sen. Comerford said that since the 1990s, Congress has not done as much as they should to fight climate change. However, she said that is going to change.

“It’s really clear to me that many of my colleagues, and of course the House members on Zoom with us tonight and many in the Senate, feel the urgency of this mandate coming to the state,” Sen. Comerford said. “We have to rapidly decarbonize our atmosphere, our economy, the way we run our businesses, and the way we build our homes.”

Bringing attention to The 100% Renewable Energy Act may be difficult during this time, especially because the U.S. is facing a pandemic. Sen. Comerford explained that climate justice and public health can go hand-in-hand.

“As we rebuild from the COVID-19 crisis… we rebuild with this kind of intersection of putting our public health and our climate justice together, and build a future back from COVID…  that will get us this 100% renewable zero emission Commonwealth that we also very much want,” she said.

Rep. Natalie Blais discussed how gas emissions have decreased since the start of the COVID-19 pandemic. She said, “Pollution and greenhouse gas emissions have fallen as we have sheltered in place across our globe. If anything, we have seen a glimpse into what our future could look like, and science is taking center stage, despite what Trump would like us to believe.”

Rep. Lindsay Sabadosa explained that COVID-19 is an environmental issue just as much as a public health issue. Rep. Sabadosa highlighted a study done by Yaron Ogen called, “Assessing nitrogen dioxide (NO2) levels as a contributing factor to coronavirus (COVID-19) fatality”. The study looked at 66 regions in Italy, Spain, France and Germany through March 19, and found that 78% of fatalities were in areas with increased pollution. Rep. Sabadosa argued that the federal delegation needs to pass the Green New Deal sooner rather than later so that the U.S. can lower its air pollution.

Sarah Reyes from the Sunrise Movement and Rep. Dan Carey expressed their thoughts on how the power to pass these bills lies in the hands of young people. Reyes is a senior at Longmeadow high school and the Hub Coordinator of the Sunrise Hampton County Hub. She helped organize the December 2019 climate strike in Springfield and has participated in other movements for environmental issues.

Kaitlyn Mitchell, a representative at MASSPIRG and a senior at UMass Amherst, is another young adult who has advocated for protecting the environment. Mitchell is from Springfield, Massachusetts, which has high records of asthma. Having asthma herself, she said she has seen firsthand what pollution does to a community and the generations that follow. Mitchell spent the majority of her college career working on climate policy issues through MASSPIRG, and she says she will continue doing similar work in the climate advocacy world after graduation.

A question and answer session followed the guest speeches, in which attendees asked questions about how they can advocate for The 100% Renewable Energy Act and The Green New Deal.