In their home opener, the New England Patriots fight their way to a win in the second half 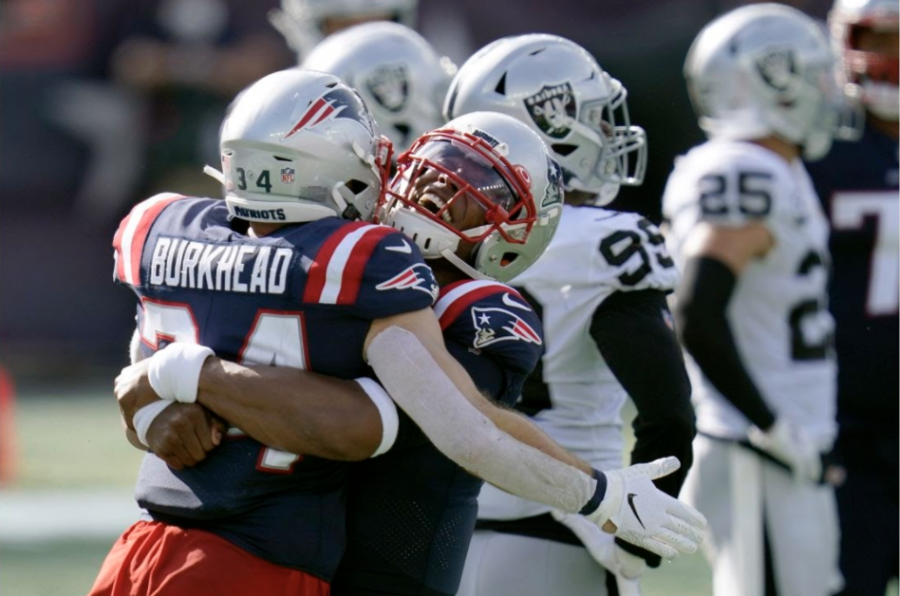 The Patriots returned back to Foxborough for their home opener against the 2-0 Las Vegas Raiders. The Raiders are fresh off a big win on Monday night against the New Orleans Saints but were without 5 starters due to injury, including tackle Trent Brown and rookie receiver Henry Ruggs III. New England would be without starting center David Andrews, who was recently put on injured reserve. Joe Thuney got the start in his absence. Before the game, Gillette Stadium held a moment of silence to honor the White family and pay respects to James White’s father, Tyrone White, who lost his life in a horrific car crash last week.

The Raiders demonstrated just how good their defense can be, forcing back-to-back punts from New England on their opening drives. Second-year running back Josh Jacobs got the Las Vegas offense rolling in the first quarter, garnering 6 or more yards on his first five carries. The Patriots defense corrected this by recovering a fumble after safety Adrian Phillips punched the ball out of the hands of Jacobs. The Patriots’ struggles continued, however, as Cam Newton was intercepted on the next possession by Jonathan Abram who returned it to the New England 14 yard line. Las Vegas struck first as kicker Daniel Carlson hit the 29-yard field goal to put the Raiders up 3-0.

Undrafted rookie J.J. Taylor provided a spark for the New England offense on the ground, gaining 9 yards on his first rush and then securing the first down on the next play. The 5’6” Arizona product put his speed on display as he blazed through the tackles and through the hands of defenders. The success on the ground allowed for Newton to find receiver Julian Edelman for 15 yards and set them up for a 33-yard field goal from Nick Folk to tie the game at 3-3.

The New England defense caused another turnover after defensive end Chase Winovich knocked the ball out of the hands of Raiders quarterback Derek Carr and into the arms of Lawrence Guy. The Patriots’ offensive line got to work as Taylor received three consecutive handoffs and turned them into gains of 6, 5 and 4. Rex Burkhead also got into the mix and bounced outside for a 17-yard run. Once again, Newton and the Patriots were unable to reach the end zone but took a 6-3 lead on a 23-yard field goal from Folk with 7:56 left in the second quarter.

Late in the second quarter, after taking the backseat to Taylor and Burkhead, Sony Michel accumulated three straight touches and turned them into gains of 8, 13 and 9. New England finally found pay dirt when Newton dumped it off to Burkhead as he zigged and zagged before hurdling over a sea of defenders for the well-earned score. With only 27 seconds on the clock, the Raiders drew a flag on Stephon Gilmore for pass interference to put themselves in New England territory. Carr took a shot deep downfield and was able to connect with receiver Hunter Renfrow for a miraculous catch for 26 yards. Originally ruled a touchdown, Renfrow would be marked down at the 1-yard line with 9 seconds left on the clock. Regardless, Carr was able to find Foster Moreau to make the score 13-10 Patriots heading into halftime. Cornerback Joejuan Williams and the New England defense smothered star Raiders tight end Darren Waller, holding him to zero catches on zero targets in the first half.

Raiders received the second-half kickoff and Josh Jacobs picked up where he left off, wreaking havoc on the ground. Carr was able to connect with rookie receiver Bryan Edwards for the 34-yard gain, the longest play of the game from both sides. Edwards landed awkwardly on his right ankle after being tackled on the play and would be sidelined for the remainder of the game. Devin McCourty nearly had an interception after a pass went through the hands of Jacobs, but failed to corral it before it hit the turf. The New England defense stopped the Raiders and forced them to kick a field goal, but the score would stay the same at 13-10 after Carlson missed the 41 yarder.

The Patriots found their niche in the second half the same way they did in the first — by running the ball and getting yards on the ground. This time, it was Sony Michel rushing for 38 yards to bring them into Raider territory. Newton, Burkhead and Taylor also pitched in for positive runs of 15, 6 and 4, respectively. The terrific drive would be capped off by Burkhead who rushed for 5 yards and the score, making it his second of the day, while pushing the Patriot lead to 10.

The Patriots’ offensive line continued to create huge gaps for runners, as Michel ripped off another huge gain of 48 yards. Taylor had an opportunity to score on a 2nd down and 11 but dropped the pass as he began looking downfield. Folk nailed the field goal to make him 3/3 on the day, and extend the Patriot lead to 13.

Las Vegas hit the ground running late in the third quarter, starting off with a deep shot to Moreau for 24 yards. Raiders fullback Alec Ingold showcased some extreme athleticism when he hurdled Patriots cornerback J.C. Jackson. On a crucial third down and 6 for Las Vegas, Carr was able to dodge Patriots defenders and use his legs to get the first down. This would be the Raiders’ first third-down completion on the day, as they were 0/5 through the first three quarters. Devin McCourty missed another opportunity to force a turnover after a pass intended for Waller went through the hands of the Patriots’ safety. The stout Patriots defense was still able to stop the Raiders on the 7-yard line, forcing them to settle for another field goal, making the score 23-13.

Newton got the Patriots offense started in the fourth quarter with a 27-yard strike to N’Keal Harry and a dump-off pass that Burkhead took for 11 yards. Newton also took it himself as he scrambled up the middle for a large gain of 21. Burkhead nearly scored when he took a handoff and bounced outside for a gain of 14, but was stopped just short of the goal line. Burkhead would not be denied, however, as he ran up the gut for his third touchdown of the day. Unfortunately, Folk went on to miss the extra point and keep it a two-score game at 29-13.

Per usual, New England special teams made a great play to put the Raiders offense in bad field position. As a result, Carr was forced to take the snap dangerously close to his own end zone, and the Patriots took advantage as linebacker Shilique Calhoun strip-sacked Carr and Deatrich Wise Jr recovered it for the touchdown. This score would put the Patriots up 36-13. The Raiders would score once more on a 13-yard pass to Renfrow, but by this time the game would be out of reach for the Las Vegas Raiders. New England would go on to win the game 36-20.

Cam Newton surpassed Randall Cunningham as he moved into second all-time in rushing yards by a quarterback: another milestone to accompany Newton’s hot start to his career as a New England Patriot. Newton recorded 27 yards on nine carries, pushing his career total to 4,930. Number one on the list is Michael Vick, who amassed 6,109 rushing yards in 13 seasons.

Rex Burkhead paved the way for the Patriots victory as he went off for 49 yards on the ground and two touchdowns. He also led all pass catchers in catches and yards, logging 7 catches for 49 yards and an additional score. Head coach was his usual humble self in the post-game conference when asked about the team’s conditioning. “I think their physical conditioning is good,” he said. “We need to improve our in-game conditioning… it’s a continuous work in progress.” The New England Patriots will face off against the defending super bowl champions Kansas City Chiefs next Sunday.