Hoyer was benched for Stidham in the New England Patriots’ 26-10 loss against the unbeaten Kansas City Chiefs. 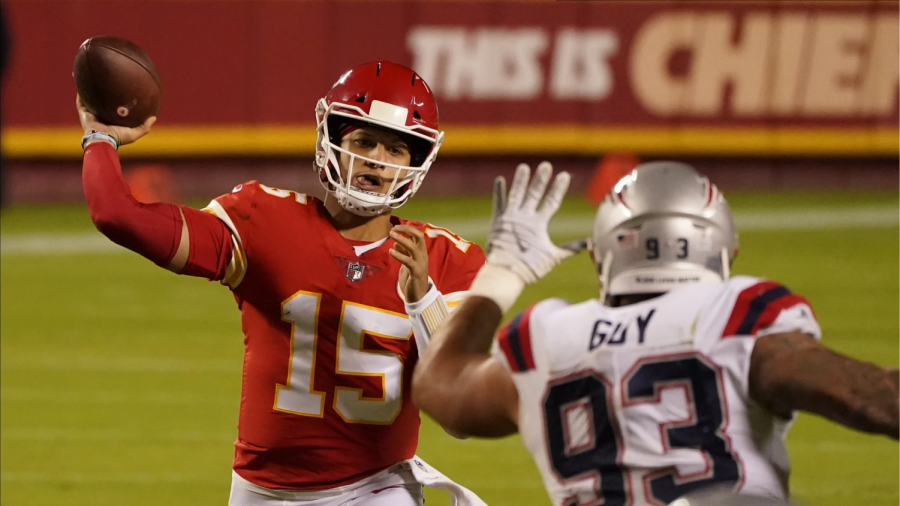 On Saturday, Patriots quarterback Cam Newton tested positive for COVID-19. As a result, their game against the Kansas City Chiefs was rescheduled to Monday night to allow time for all players in both organizations to be tested before kickoff. Brian Hoyer stepped in for his first start as a New England Patriot despite being with the organization for six seasons.

New England’s defense had a formidable first half and held the defending Super Bowl champions to a mere 6 points on 2 field-goals. The Chiefs high-powered offense produced big plays as Patrick Mahomes connected with 3 different pass catchers for gains of 20 or more, but New England stopped Kansas City from reaching the end zone. The Patriots secondary forced its eighth turnover in four weeks after Stephon Gilmore punched the ball out of the hands of Sammy Watkins and into the hands of J.C. Jackson. This led to a 43-yard field goal from Nick Folk to put the Patriots on the board as they trailed 6-3.

The Patriots’ played uncharacteristically sloppy as they made several clumsy mistakes which could have turned the tide in their favor. After snagging a pick-six two weeks ago against the Seahawks, Devin McCourty dropped an easy interception which would have prevented Kansas City from kicking a field goal. Another opportunity was missed when the Patriots’ defense recovered Mahomes’ fumble and began taking it to the house when referees whistled the play dead. Bill Belichick lost his calm stature after this bad call, but unbeknownst to him, the referees also mistakenly ruled Mahomes down by contact before the fumble. As a result, Kansas City punted the ball away, and Belichick was too busy arguing with the official to throw the challenge flag. When asked about his mental fumble, he called it a “dumb mistake” on his part.

New England’s struggles did not end there. Before halftime, Hoyer was sacked in the red zone and New England had no timeouts to give as time expired and the Patriots missed out on an opportunity to kick a chip shot field goal. New England found themselves in a similar situation in the third quarter when Hoyer fumbled the ball on the 10-yard line on third down and the Chiefs recovered. Stidham was then given the call and entered the game late in the third quarter. Harris took the pressure off the young quarterback’s shoulders as he split the tackles and ripped off a huge 41-yard run, the longest of his novel career. Stidham would put the stamp on the drive with a perfectly thrown ball to a diving N’Keal Harry for the touchdown.

Just when things started looking up for the Patriots, Julian Edelman would let a pass go right through his fingertips and into the hands of Chiefs’ safety Tyrann Mathieu for a pick-six to put Kansas City up 26-10. In a last-ditch effort to try and keep the game close, Stidham looked deep for Damiere Byrd but under-threw the pass and it was intercepted by the Chiefs’ secondary once again.

This loss was most certainly a wake-up call for New England. It was apparent that the Patriots missed Cam Newton and his big-play ability as the offense failed to generate any momentum. Hoyer was extremely rusty and completed only 15 passes on 24 attempts and failed to find the endzone. Stidham was not much better, as he completed only 5 passes for 60 yards, but did provide a glimpse of hope with his lone touchdown pass to Harry. Turnovers were also a major issue, as the Patriots finished the game with four total. However, despite the several careless mistakes, the Patriots played a relatively good game. Through the first three games this season, Kansas City averaged 16.7 points in the first half. New England held them to just 6. The Patriots’ defense was able to frustrate Patrick Mahomes by keeping his two primary targets contained. Travis Kelce and Tyreek Hill combined for only 63 yards on 3 catches in the first half. After torching the Baltimore Ravens defense last week for 385 passing yards and 5 touchdowns, Mahomes had only 236 passing yards and 2 touchdown passes, neither of which traveled past the line of scrimmage. Bill Belichick has held the Kansas City Chiefs to its three lowest first-half scoring outputs during the Patrick Mahomes era.

On the offensive side of the ball, Damien Harris rushed 17 times for 100 yards in the absence of Sony Michel, who was put on injured reserve Monday morning. The running back received his first carry of the season on the first offensive snap of the game and was the focal point of the ground attack. In his final season at Alabama, Harris out-snapped, out-carried and out-targeted teammate Josh Jacobs, whom the Patriots played against last week versus the Las Vegas Raiders. Harris showed flashes of his potential throughout the game and proved why the Patriots were correct to draft him back in the third round of the 2019 draft. Meanwhile, James White rushed 3 times for 21 yards and paced all pass-catchers with 7 catches for 38 yards in his first game back after missing two weeks. White moves into ninth place in the Patriots all-time receptions list.

If Newton is asymptomatic, he has a chance to start next Sunday against the 1-3 Denver Broncos if he has consecutive negative tests. If he shows signs of any symptoms, Newton will not be allowed to play next week and will have to wait ten days before he is eligible to return from the COVID-19/reserve list. Stidham is in line to receive the start if Newton is unable to play.