“Honor Her Wish” a touching tribute to the late RBG

A star-studded event reflecting on the life, accomplishments and legacy left by the lost justice 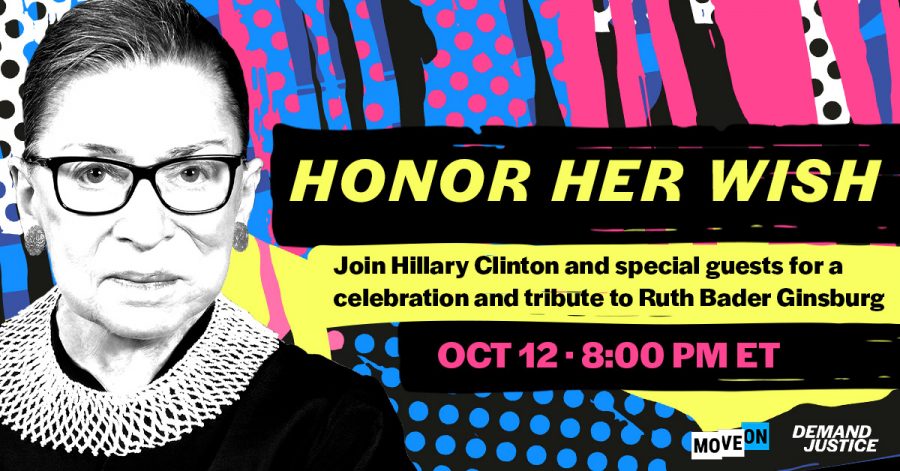 On September 18, 2020, the world mourned the loss of the notorious Supreme Court Justice Ruth Bader Ginsburg. Loved by many, Ginsburg took major strides and fought fiercely for the equality of women, but more importantly the equality of all. Her loss has left a hole in the Supreme Court, but also a hole in the lives of many who looked up to her and relied on her to continue fighting for what’s right. On October 12, Demand Justice and MoveOn joined forces to organize “Honor Her Wish,” a touching virtual tribute in honor of RBG.

Days before she died, Ruth Bader Ginsburg said: “My most fervent wish is that I will not be replaced until a new president is installed."

I'll be rallying with @wedemandjustice to honor her wish tonight:

No confirmation until inauguration.

Titled Honor Her Wish, as it was RBG’s wish from her deathbed that her seat not be filled until the elections were over, the two-hour event took place over a live stream, that viewers would have to RSVP through the Honor Her Wish website. The event began with kids of all ages talking about the legacy of RBG and what she meant to them which definitely pulled on the heartstrings. From there, singer-songwriter Miley Cyrus gave a touching speech about RBG and the importance of voting during the upcoming election. Cyrus would go on to introduce the emcee of the night Meena Harris, lawyer, children’s book author, founder of the Phenomenal Woman Action Campaign and niece to Kamala Harris. Throughout interviews, speeches and touching performances, Harris would act as a transition. Honor Her Wish was definitely a star-studded event and primarily a female-led one. After watching the two-hour tribute, here are some of the highlights.

Demi Lovato, who has been in a very public breakup with former fiance Max Ehrich, made a glowing on-camera appearance. “While we’re honoring an icon, we also recognize that her loss is a very scary thing for a lot of people,” said Lovato. Like most of the women and speakers of the evening, Lovato urged viewers to vote, reminding us all that we had the power to make a difference. She would then go on to introduce Massachusett’s own Elizabeth Warren, a world collision I never knew I needed, but I was so happy that I got to witness. Warren too had touching words to say about RBG and urged us as a country to make a change in honor of her legacy.

The biggest highlight for me was Hayley Williams’ performance of “Roses/Lotus/Violet/Iris.” Williams made a special dedication to her mother and grandmother, as well as all women who have ever gone through any form of sexual or domestic abuse. Her performance was bone-chilling, yet beautiful giving me goosebumps the entire time. Placed in a living room set, you felt at home with Williams, made more realistic by the way her dog laid by right side the whole performance. One of the best lines was, “I myself was a wilting woman / Drowsy in a dark room / Forgot my roots / Now watch me bloom.” It was definitely one of the best performances of the night.

On the non-performance side, one of my favorite interviews was with Stacey Abrams. Abrams is a politician, lawyer and voting rights activist. She was interviewed by one of the sweetest and most composed young girl, who honestly has better interviewing than I could ever, making me want to be more like her when I grow up. The young girl and Abrams discussed RBG’s fight for voting rights as well as what has changed over the years. My favorite quote from Abrams was, “One thing that has improved dramatically is the ability of young women of color to dream big. When I was growing up…I never could have imagined that I could possibly serve in the highest office in the land, but because of women like Ruth Bader Ginsburg, because of women like Fannie Lou Hamer and women like Secretary Hillary Rodham Clinton, I know that we are capable of doing so much more.”

Speaking of Hillary Clinton, she also made an appearance during the night and discussed what went into the process of selecting RBG for the Supreme Court. “It was set up for her to come in for an interview on a Sunday afternoon, it was supposed to be a casual conversation,” began Clinton. “Bill of course would be watching football on a Sunday afternoon. So Ruth showed up and she was in very casual clothes, Bill had actually left watching football to put a suit on in order to interview her. She would laugh about how she was so embarrassed that she came to the White House in such casual clothes.” For me, this really felt like the spirit of RBG. Her humility and fun personality shone through in Clinton’s story as she went on to talk about how RBG gave a “master class in the law and constitution.”

To cap off the night, they saved the best for last with a performance from Kesha. Performing her original “Here Comes the Change,” Kesha stripped the song down to only her and a piano, giving the song a whole new life. It felt like this song was needed now more than ever, almost like an anthem to the movement that Demand Justice and Honor Her Wish were fighting for. With open lyrics like, “One day I’ll be gone / The world will keep turning / I hope I leave this place / Better than I found it,” Kesha moved me to my core. It felt like a moment of encouragement, that change is indeed coming, and in the wise words of Lin-Manuel Miranda “this is not a moment, but a movement.”

Honor Her Wish, was an amazing tribute to a true icon and American hero. The work RBG did for women and equality will leave its lasting marks on our country. I can only hope that we as a nation continue to fight for her wish, that her legacy may not be overlooked by those who are currently trying to replace her. You can find highlights on the Demand Justice Twitter and videos from the performers are on their YouTube channels. Honor Her Wish will re-broadcast on Wednesday, Oct. 21 at 8 pm ET. Anyone is able to RSVP here.