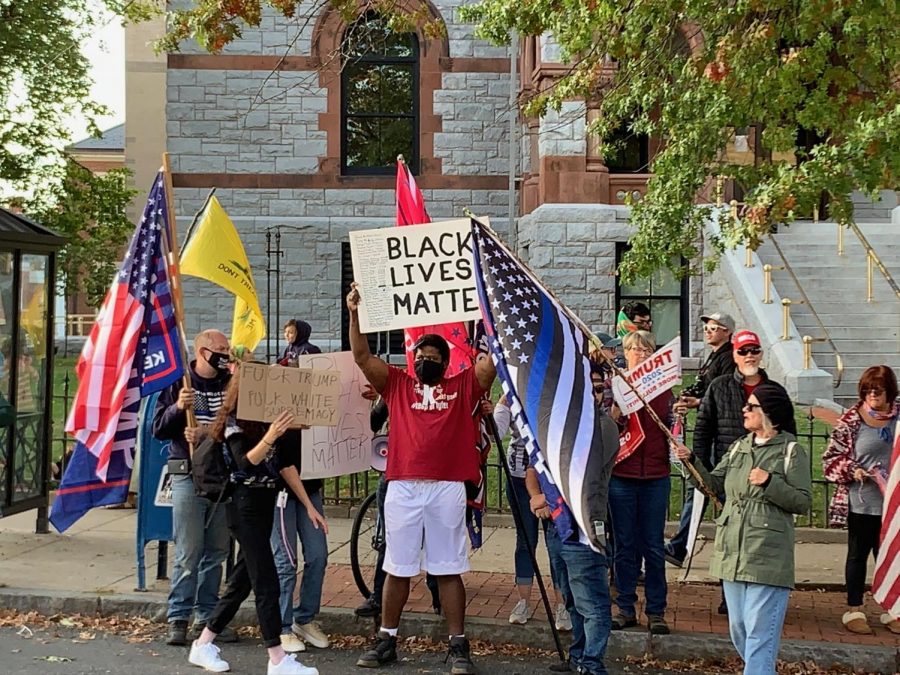 NORTHAMPTON – “I hope you clean that finger before you stick it into your boyfriend,” shouted a Trump-rallier towards a disapproving Northampton resident.

A mundane Sunday afternoon turned ablaze after an unbeknownst Trump rally, staged near the Hampshire County Courthouse, incited a counter-protest led by local passerby residents. The three-hour rally resulted in the arrest of one counter-protester.

The Northampton rally, orchestrated by the Chicopee Republican City Committee, was the seventh stop among a string of Trump protests led by the organization. As stated on the group’s Facebook page, they intended to “Back the Blue” and show their support for Donald Trump’s re-election, through reinforcing signs, attire, flags and chants.

Northampton worker, Avery Miraglia, was one of the first counter-protesters on the scene

“I was on my way to Deals and Steals that day and I saw one person with a large Trump flag and sign making a scene on Main Street. I decided I would park my car and grab my anti-Trump sign to counter,” said Miraglia.

Miraglia initially believed the Trump supporter was alone. “The person noticed me, they walked up the hill towards their car. About 15 minutes later, around the corner from the police station comes a herd of Trump supporters.”

“My mom was downtown and saw a bunch of Trump supporters lining up by the median,” said Northampton resident Nural Hasan.

Hasan had her mother pick her up and drive her downtown so she could see the rally for herself. As they approached the courthouse, Hasan’s attention diverted towards the CVS pharmacy opposite of the courthouse.

“I saw a group of 10 people standing in front of CVS chanting,” said Hasan.

These people were the first to initiate the anti-Trump counter-protest. They ran into the CVS to purchase poster boards and markers to draft up signs stating “F— Trump” and “Black Lives Matter.” The anti-Trump counter-protest was growing larger by the second; local residents, onlookers, and passerbys ran into the CVS in droves to join the participant pool.

Hasan also chose to join the counter-protest, running inside the pharmacy to purchase materials. She noticed how upset the CVS cashier was by the adjacent Trump rally.

“The girl behind the CVS counter was Black. She told me how uncomfortable all those Trump supporters made her feel,” said Hasan

Tiffany Rivera, a CVS cashier, saw the beginning of the Trump rally after clocking into work.

“There was just one Trump supporter at first, then 15 minutes later swarms of Trump people came,” said Rivera.

Rivera witnessed the counter-protesters stormed the CVS for supplies. She allowed them to use the CVS floor as sign-designing space to ensure the signs weren’t trampled.

“I felt annoyed. I don’t agree with things Trump does or Biden either, but for the Trump supporters to do all that and to see how they treat people is horrible,” said Rivera.

The Trump protestors retreated towards the sidewalk of the courthouse, allowing the counter-protesters to claim the median. A stampede of ear-splitting cars, supporting both sides, circled the protest groups. Phrases such as “Boooo Biden” and “All Lives Matter” could be heard from some, as well as “Dump Trump” and California-based rapper Y.G’s “F. D. T,” or F— Donald Trump, an anti-Trump anthem could be heard from others.

The Northampton Police Department arrived to mediate the protests. NPD chose to stand on the side of the Trump supporters once arriving at the rally. The majority of the counter-protesters were led to assume the police were aligned with the Trump supporters.

The Trump supporters also refrained from wearing masks in an area littered with “Mandated Mask Wearing Zone” signs. Counter-protestors and Northampton residents expected NPD to enforce the bylaw upon the Trump supporters, but this never occurred.

“They were not having them wear masks,” said Hasan.

When questioned as to why this policy wasn’t enforced onto the Trump supporters, Northampton Police Sgt. Patrick Moody said, “It’s extremely hard enforcing that policy upon large crowds such as this.”

“You’re law enforcement. Who else enforces the law besides you?” Hasan critiqued.

“The arrests made were very confusing, and the police presence was overwhelming,” said Miraglia.

“I saw a woman get arrested for standing up for her rights,” said Rivers. The woman allegedly threw a tampon into a Trump supporter’s face, after the supporter walked up to her and began an altercation.

“I saw two police officers grab her by her arms and drag her away,” said Hasan.

This was just one of many Trump rallies planned by CRCC to be held in countless cities across Massachusetts up until the Nov. 3 election. The group’s current objective is to target progressive cities with the hopes of eliciting a reaction from local residents.

NPD has yet to comment on Sunday’s rally and the arrest made.