Cam Newton was benched for backup Jarrett Stidham in the grotesque 33-6 loss, the worst at home under Bill Belichick 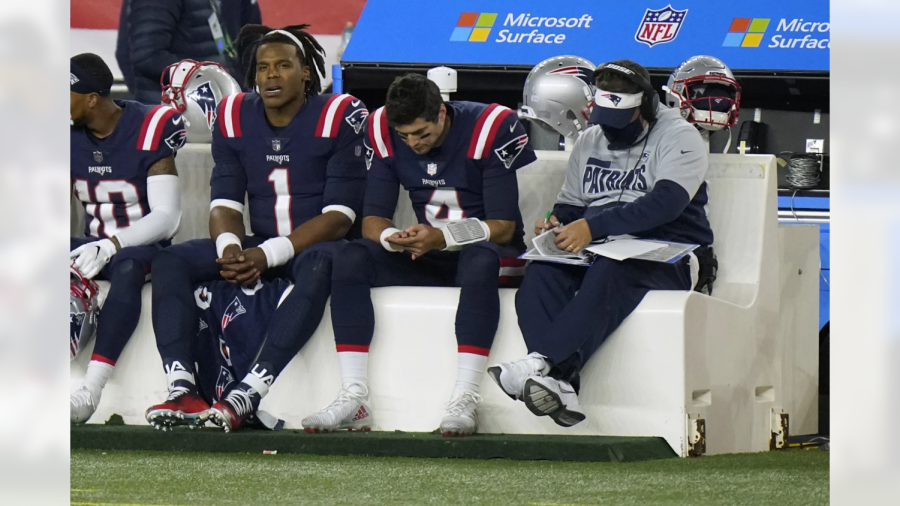 Bill Belichick faced off against his former quarterback, Jimmy Garoppolo, as the 2-3 New England Patriots hosted the 3-3 San Francisco 49ers. Belichick has a 7-1 record versus quarterbacks drafted by or started for New England.

San Francisco scored on the opening drive of the game with a 3-yard touchdown rush by Jeff Wilson Jr. This was the first opening-drive touchdown the Patriots have allowed in 32 home games. Garoppolo connected with George Kittle and Deebo Samuel on the drive and was a perfect 4/4 for 60 yards.

Nick Thurman was brought up off the Patriots’ practice squad only 24 hours before the game started, but made an immediate impact as he brought down Wilson for a loss of 2-yards on the 49ers’ second drive. Lawrence Guy also got in the mix and sacked Garoppolo. Despite these two phenomenal plays, Garoppolo was able to find his two top targets, Kittle and Samuel, for first downs. The Patriots’ secondary did not falter, and safety Devin McCourty intercepted an overthrown pass intended for Kittle. The Patriots leaned primarily on their ground game to move the ball upfield. The rushing attack was led by Newton, Burkhead and Harris who set up the made 40-yard attempt from Nick Folk to start the second quarter. N’Keal Harry suffered a devastating blow to the head during the drive and was immediately tested for a concussion prior to being escorted to the locker room. He did not return for the remainder of the contest. 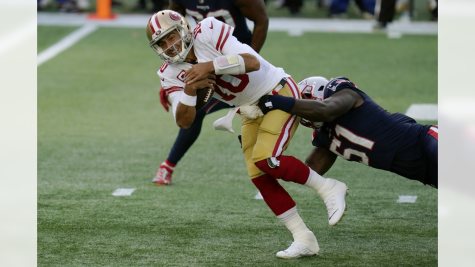 For the fifth time this season, Cam Newton had his pass intercepted. A low thrown ball intended for Jakobi Meyers was picked off by linebacker Fred Warner and positioned San Francisco comfortably in New England territory. It was fullback Kyle Juszczyk who punched in the 4-yard rushing touchdown.

The Patriots had two fumble scares in the following drive that both were corralled by New England. On the final drive of the half, Newton found Jakobi Meyers for the 20-yard completion, Newton’s longest throw of the game thus far. Newton then aired it out to Meyers in an attempt to get the ball past the safety, but the pass was intercepted again, this time by Emmanuel Moseley. Garoppolo attempted to air the ball out himself, and in a similar fashion, was picked off by J.C. Jackson to end the half. Newton struggled heavily in the first half, and barring the long throw to Meyers, Cam had only 10 passing-yards on two completions, accompanied by two interceptions in what was one of the most pathetic first halves by a Patriot team in a long, long time.

The Patriots’ halftime adjustments proved to be fruitful, as New England finally showed signs of life on offense. Newton found his stride in the second half, as he stepped up in the pocket and delivered a strike to Meyers for 21-yards. The next play he dumped the ball off to Damien Harris, who was able to scamper upfield for 12-yards after the catch. What looked like the best drive of the half was promptly ended when Newton was sacked for a big loss, and the Patriots settled for a field goal to put the score at 23-6 early in the third quarter. The much-needed momentum was crushed on a 35-yard catch by Brandon Aiyuk, which set up the 7-yard touchdown by Wilson, his third of the day. Newton was benched early in the fourth quarter and Jarrett Stidham was given the go-ahead. Cam finished with 9 completions for 98 yards and 3 interceptions, while Stidham had 6 completions for 64 yards and an interception in the 33-6 loss.

Where to begin. For starters, the Patriots offense lacks weapons. Simple as that. New England’s top receiver is 34-year-old Julian Edelman who is made of glass and cannot separate himself from defenses to get open. It also does not help his case that the quarterback play beyond week 2 has been nothing short of terrible. On Sunday, Edelman had two balls thrown his way. Both of them were intercepted. N’Keal Harry brought in a contested 6-yard catch before his untimely departure.

The time of possession was also incredibly skewed. The Patriots were on offense for 22 minutes, while the 49ers were on for 38 minutes. The 49ers’ offense was on the field for an entire quarter more than the Patriots’ offense. The offense’s inability to make big plays and develop long drives only hurts the defense, who spend more time on the field trying to pick up the slack. It is impossible to win games when you do not have the ball.

Two of the Patriots’ biggest defensive powerhouses, Don’ta Hightower and Patrick Chung, opted out back in July to prioritize the safety of their families, and their presence was missed dearly. Jimmy Garoppolo was benched for backup C.J. Beathard just two weeks ago but showed no signs of it as he throttled the Patriots secondary 277-yards on 20 completions. However, most of the damage came on the ground, thanks to the career day by Jeff Wilson Jr., who turned 17 carries into 112-yards and 3 touchdowns. New England did a fairly good job of containing the 49ers’ most lethal weapon in Kittle, who had a modest 5 catches for 55-yards. Meanwhile, Brandon Aiyuk caught 6 passes for 115-yards.

In the post-game press conference, Belichick was asked if he plans to have Cam Newton as the starting quarterback going forward: “Yeah, absolutely. Just wanted to give Stidham a little experience there.” The Patriots will travel to Buffalo next Sunday to face off against the AFC East rival Buffalo Bills.