Modern witchcraft is a far cry from broomsticks and cauldrons 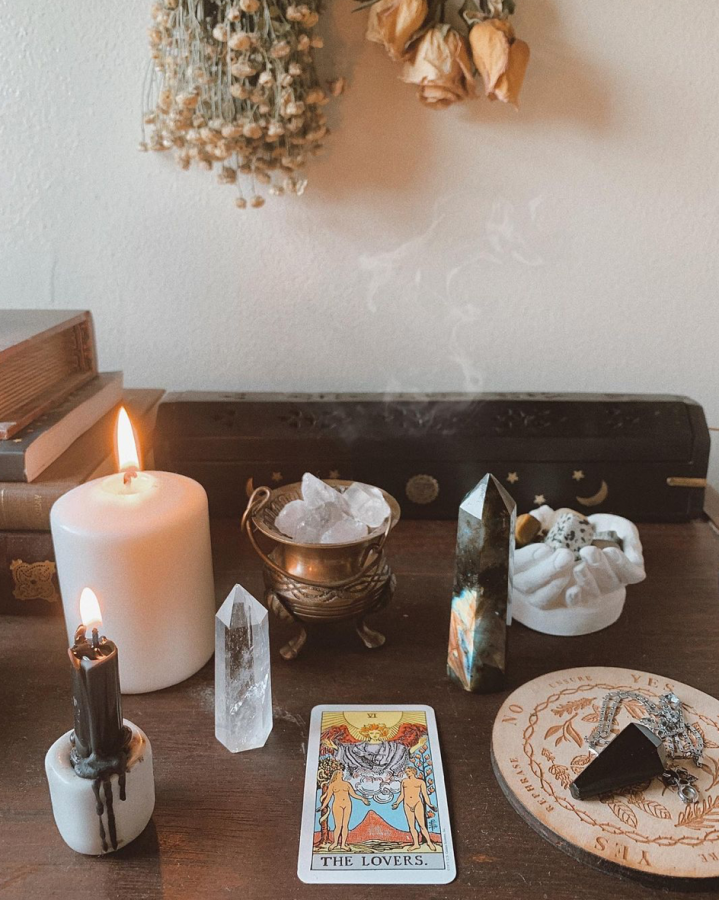 Nicole Phillips was working at a menswear boutique in Portland, Oregon in 2016 when she discovered witchcraft. When coworker Teyvn Bray introduced himself, he stopped and looked Phillips up and down before commenting that there was something different about her, that she had an unbeknownst spiritual gift. Phillips was a little confused. She discovered that Bray was a witch and began learning and practicing witchcraft with him.

“He just showed me what [witchcraft] was and the real meaning of it, which is basically just energy and intent and getting back in touch with Mother Nature,” Phillips said.

Witches are real. But unlike Hollywood movies, they don’t fly on broomsticks, shoot fireballs from their hands, or look like old crones with warts. Rather, modern witchcraft is part of growing Wiccan and pagan movements in the United States and U.K. It is a practice that involves manifesting intentions through both personal inner energies and energies of the natural world.

The European elite saw witchcraft as an anti-Christian conspiracy that challenged the authority of the Pope and kings.

“These scholars have argued that some [Christian theists] were concerned about the reality of the invisible world, of angels, devils, and of God and Satan, and that the testimony of supposed witches who had signed pacts with the devil and had been given supernatural power in fact were among the best evidence for the existence of the devil. And if the devil exists, then as a consequence, God must exist as well,” University of Massachusetts Amherst history professor Brian Ogilvie said.

This did not stop elites from using ceremonial magic such as alchemy and astronomy. Tommaso Campanelli famously created an alternate cosmos underground to realign the stars in the Pope’s favor. Learned magic users, however, were often literate men who claimed to command power, rather than witches who were often females, thought to be seduced by satanic influences.

The negative reputation of witches from the 13th to 15th centuries persists in current views of magical practices, forcing many modern witches to stay hidden. Lily Belle has been studying witchcraft for three years, but in fear of her mother’s reaction, stayed in the broom closet for the first two of them. Like most closeted witches, Belle learned from blogposts and online social media communities, but she struggled to decipher misinformation from facts.

“I’ve had a hard time and I kind of felt alone in my journey just cause before I really dove into the community I felt like I couldn’t find anyone that was in it, and I felt like just Googling things was just not really the best way to figure out what witchcraft is because I just don’t know what sources are reliable or not,” Belle said.

Belle’s isolation and difficulty studying witchcraft inspired her to start her own Facebook group called “Witches Inner Circle.” The online community brings old and new witches together to answer questions, lead lunar rituals, and post podcasts. Belle has grown herself and further defined her own practice.

Nicole Phillips also connects to the witchcraft community online. She runs the business and witchcraft Instagram @crescentandcraft, where she posts witch altar inspiration and her Etsy store.

Modern magical practices use rituals to manifest a person’s intent. Larger rituals can involve candles with sigils or ruins on them, meditative baths with salt and herb mixes, spell jars or divination tools like tarot cards or pendulums. Yet, most witches do not conduct fancy spellwork every day. Daily practice usually includes meditating for five minutes, pulling a tarot card for the day or stirring incantations into tea.

“It’s very wholesome in that way in where you kind of just worship the world and you get to see that everything is connected and so you have a deeper, more meaningful connection to everything around you,” Phillips said.

Witches also pull from different folklore and tools into their practice. Phillips uses dreams and nature in her practices and works with Greek goddess Persephone. Belle experiments with herbs in her kitchen and makes offerings to Norse Goddess Freyja.

Just a few of the types of witches are sea witches, kitchen witches, green witches, lunar witches, fairy witches and hedge witches. However, many practitioners are eclectic and sample from all magic types.

“It’s way more accepting and it’s kind of like not one set of beliefs so the kind of path that you want is kind of unique to you,” Belle, who is a green and kitchen witch, said. “I feel like a lot of people like that because everything else seems so binary, but witchcraft just opens a whole new world of finding your inner divine [femininity] or your power.”

It is also important to note that witches are not just women; many men, transgender and gender-expansive individuals also partake in magic practice.

“And especially BIPOC folks, they’re getting more in touch with their cultural ancestry,” Phillips said. “When I started learning more about witchcraft, I started doing a little family history digging and I found out that my great-grandfather was actually a witchdoctor in the Philippines and I thought that that was so cool and kind of further validated what Tevyn’s initial beliefs were about me.”

Most modern witch traditions stem from Wicca, a religion created in the 1950s that borrows from Medieval and Classical magic practices. The Founder of Wicca, Gerald Gardner, adopted the teachings of Margaret Murray, who wrote on the existence of a Middle Age occult religion that worshipped a horned god, into the folklore for Wicca in 1950. Wicca borrows from the folk magic of the cunning folk and the ceremonial magic from European elites.

“So, was it a new religion? Yes. Was it an old religion? Yes,” Wiccan Priestess Laura Wildman-Hanlon said. “So, it’s based on older principles and a lot of folk traditions thrown in with a lot of modern practices.”

Wildman-Hanlon knew she was a witch at 13, and has been a priestess for 25 years. She practices Gardnerian Wicca, which comes directly from Gardner’s teachings. As a priestess, she leads a coven by organizing rituals, ensuring the focus of the witches, and instructs members in Wiccan practices.

“A coven is like an extended family,” Wildman-Hanlon said. “The way we look at it is that every person that comes in has something to offer. Even if you are coming in without any knowledge of Wicca at all. You are still coming in with your own life experiences and those life experiences and [that] knowledge is something that you can teach us, the people you are going to be working with.”

Due to the Wiccan basis, most witches believe in animism; that all things have an energy. They also follow the wheel of the year, which includes eight sabbats. Four of the sabbats come from Celtic beliefs where the veil between the spirit world and the material world thins. The other four are solstices from Norse traditions. All other beliefs and practices vary.

“There’s a saying that if you ask five witches one question, you’re going to get at least 15 answers. It’s not that we are confused, it’s just that we see that there are many shades of grey,” Wildman-Hanlon said.

Wildman-Hanlon believes that anyone can believe in Wicca and follow the religion, but working magic takes a lot more effort.

“I can’t tell you how many times people have said, ‘You mean you’re not gonna just bop me on the head and call me a witch?” Wildman-Hanlon said. “It is a commitment.”

However, everyone performs magic on a daily basis in little ways.

“You got your lucky clothes or your lucky necklace or your lucky pencil,”  Wildman-Hanlon said. “That’s [a] magical principle. You put energy into something that is going to hopefully be an amulet that is going to attract the energies that you need in order to be successful in your exam. On your birthday, you make a wish and blow out a candle, sending your wish out to the gods. That’s magic.”