In a recent announcement, the pope issued surprising support for LGBTQ+ civil unions 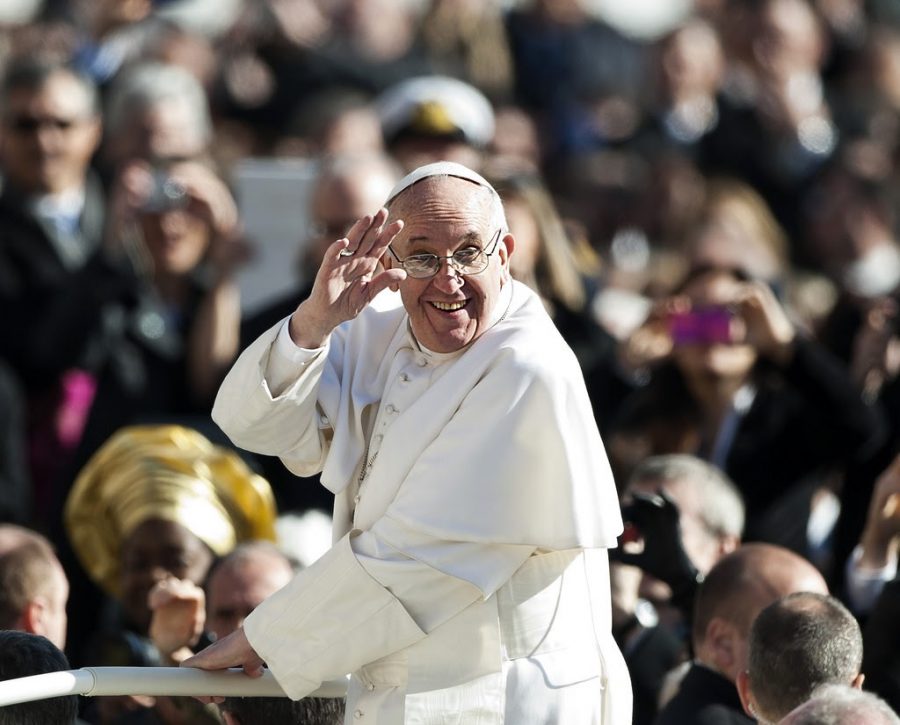 In the documentary “Francesco” by director Evgeny Afineevsky that aired in Rome on Wednesday, Oct. 21, Pope Francis endorses civil unions.

Francis had endorsed civil unions many times while he served as archbishop of Buenos Aires before he became the pope. However, Francis endorsing civil unions as the Pope has a very different weight to it. The Pope in Catholicism is the head of the church who makes decisions for all the other churches. In the documentary, Francis said “Homosexual people have the right to be in a family. They are children of God… you can’t kick someone out of a family, nor make their life miserable for this. What we have to have is a civil union law; that way they are legally covered.” He goes on to say, “Homosexual persons have a right to be in the family and the parents have a right to recognize this son as homosexual, this daughter as homosexual. Nobody should be thrown out or be made miserable over it.”

While to some people, this may not seem important, many theologians and Catholics point out why this is such a big deal. James Alison, a Catholic priest and theologian, wrote “the holy father is clearly representing such civil unions as a good and desirable thing, to be actively promoted, rather than a lesser evil. And second, because he affirms the rightness of same-sex couples forming a family and being part of the family of the church.” Rev. James Martin said in a tweet, “We can see the Pope’s comments as yet another positive step in the church’s relationship with LGBT people and a sign of his continuing pastoral care for LGBT Catholics.” Martin said in another statement, “The pope’s speaking positively about civil unions also sends a strong message to places where the church has opposed such laws,” Francis DeBernardo of New Ways Ministry said “It is no overstatement to say that with this statement not only has the pope protected LGBTQ couples and families, but he also will save many LGBTQ lives.”

Bishop Tobin of the Providence Diocese in Rhode Island made a statement saying that “The Holy Father’s apparent support for the recognition of civil unions for same-sex couples needs to be clarified.” This came through a statement on the Diocese’s website on Oct. 21 where he said “The Pope’s statement clearly contradicts what has been the long-standing teaching of the Church about same-sex unions. The church cannot support the acceptance of objectively immoral relationships. Individuals with same-sex attraction are beloved children of God and must have their personal human rights and civil rights recognized and protected by law. However, the legalization of their civil unions, which seek to simulate holy matrimony, is not admissible.” While this is not a surprising statement coming from Tobin, a man who has consistently spoken out against gay marriage, this is definitely a sad one. Not only is Tobin saying that LGBTQ+ people should not be married in the church, but he is also saying that the church does not support the legal protection of same-sex marriage or the rights that come along with civil unions because they are “simulating holy matrimony.” To say that a legal matter is a simulation of a catholic tradition is not only outrageous but undermining the separation of church and state.

Rev. Donald Paul Sullins, a sociology professor at the Catholic University of America, also cited a document from 2003 that was approved by St. John Paul II, saying, “The Church teaches that respect for homosexual persons cannot lead in any way to approval of homosexual behavior or to legal recognition of homosexual unions.” To have these religious leaders try and “clarify” the words of the Pope when he has clearly been in favor of respecting LGBTQ+ people and civil unions on multiple occasions before this announcement is an unheard-of act of disrespect to the head of the Catholic church.

The Pope coming out in support for civil unions and furthering rights for LGBTQ+ people is a major step for the church and puts into question the way that some Catholics use religious beliefs to weaponize hate towards the LGBTQ+ community. It also puts laws, like the right to refuse service because of religious beliefs, into question when it comes to Catholics. If the church and religion they follow is in support of the community they do not want to serve, it becomes foggy whether that business will actually be able to refuse service in the future. The Pope’s statement is just making it clearer that those who say they do not believe in gay marriage or that LGBTQ+ people should have rights can no longer hide behind religion as an excuse, they now have to be faced with the fact that this hatred is due to personal bigotry, not religious beliefs.