How I escaped ‘The Proud Boys’ ideology 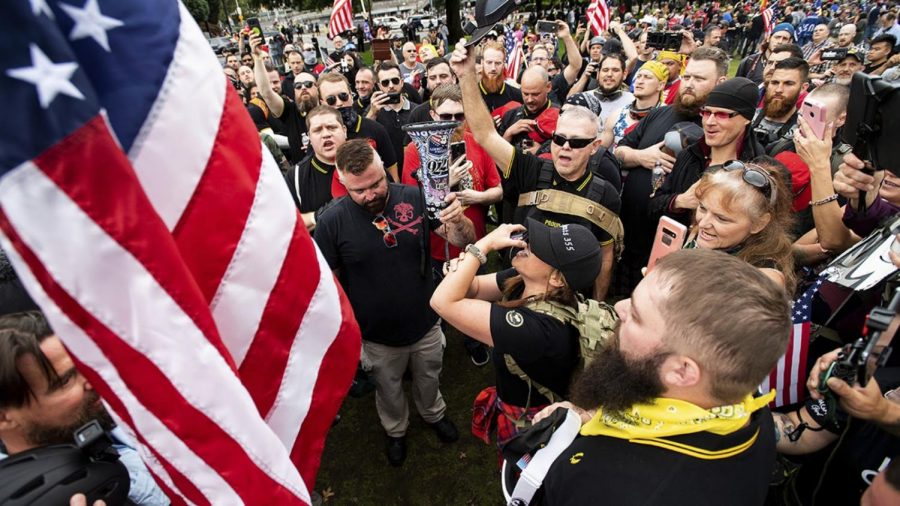 I didn’t know “The Proud Boys were Nazis” when I first attended their rally in 2018.

In hindsight, maybe I should have. Their Facebook page described them as “western nationalists,” which I now realize was a massive dog whistle. At the time I just saw them as a group that championed Free Speech™ and stuck it to those whiny Social Justice Warriors.

The Proud Boys were a radical group formed by VICE founder and former Rebel Media reporter Gavin McInnes. At the time, my only exposure to McInnes was a Rebel Media video where he got stoned and talked about how a coin flip could prove the existence of God. He seemed more like a dopey hipster than a literal Nazi.

This was in 2018. I was a 20-year-old college dropout slowly getting my life back together. A year prior I had fallen down what is known as the “right-wing rabbit-hole.” Despite growing up liberal and always being adamantly pro-life and anti-racist, I flirted with conservatism after graduating high school and frequently watched videos from the so-called “skeptic” community. These included right-wing figures like Dave Rubin, Paul Joseph Watson, Jordan Peterson and Ben Shapiro (yes, Ben Shapiro. I really hit rock bottom).

Looking back, I think it was a mix of alienation and feelings of failure that led me down that rabbit hole. In 2017, I wasn’t attending college, worked as a cashier at a grocery store and barely ever socialized with anyone. Maybe there was something cathartic about watching Shapiro “own” a sobbing college student. Maybe it just felt validating to hear someone tell me my problems were the result of some left-wing conspiracy, instead of my own personal failures.

Maybe I honestly just fell for the grift.

I never supported the alt-right though. The alt-right were Nazis, and I was not a Nazi. “The Proud Boys” also distanced themselves from the alt-right, as did many right-wing conservative figures, surprisingly. However, it didn’t stop white supremacists from watching and sharing their videos.

“The Proud Boys” held a Free Speech™ rally on Patriots Day 2018 in Concord, MA. Instead of getting drunk and crashing a BU party like I did every year, I decided to take a $40 Uber ride into Concord to check it out.

The event promised three notable guest speakers. One of them was Kyle Chapman, also known as Based Stickman. Chapman became famous for a viral video at a Pro-Trump rally where he broke a stick over an Antifa protester’s head. Another guest was Dr. Shiva, a medical expert and conservative conspiracy theorist who claimed to be the inventor of email.

However, I had driven 20 miles from Boston to Concord in order to meet Carl Benjamin, aka Sargon of Akkad. Benjamin was one of the first “skeptic” YouTube commentators I had started watching. His videos criticized feminism, ridiculed so-called “Social Justice Warriors,” and railed against immigrants, specifically Syrian refugees. It must have been his smart-sounding British accent or his elegant speaking voice that fooled people because he became one of the most popular right-wing YouTubers on the platform.

It was pouring rain when I arrived an hour and a half early. The rally was held at the site of the 1775 Battle of Lexington and Concord, a battle that essentially kickstarted the American Revolution.

“The Proud Boys,” themselves, started flooding in about 15 minutes before the rally. The majority of them were young, white and male. I only saw one woman at the rally. Some of the Boys carried “Don’t Tread On Me” flags. A few members dressed themselves up as American Patriots, complete with hats, knickers and boots. I even saw one guy waving a flag of Kekistan, the official country of alt-right mascot Pepe the Frog.

I conversed with a number of people at the rally and found that a number of them identified as classically liberal. Classical liberalism is basically libertarianism, which emphasizes small government, personal liberties and neo-conservative views. However, people like Carl Benjamin used the label to present himself as liberal while espousing far-right views. It was all a ploy to push moderate left-leaning people further to the right.

The people I talked with didn’t support Trump or the alt-right but felt strongly against the growing rise of social justice. We talked about how SJWs were “triggered” idiots, how the Marxist university system is radicalizing students, and how rampant immigration is destroying western values. Despite those beliefs, we all considered ourselves liberals, but we just weren’t like those crazy leftists

In hindsight, there was a lot of cognitive dissonance. Our liberal beliefs were inconsistent with our conservative viewpoints. We thought we were rebelling against an unfair system, but we were just compliant in retaining the status quo.

I noticed Benjamin surrounded by a group of followers, almost like they were his disciples. One of them even shielded Benjamin from the rain with his umbrella, allowing himself to get soaking wet. Benjamin was there with YouTube commentator Justin Little, also known as Vernaculis. Little reminded me a lot of myself; he was around my age and had also recently started college again. Despite how well-spoken and assured he sounded in his videos, in public he was neurotic and clearly intimidated.

I didn’t stay to hear any of the speeches. I was freezing, soaking wet and just wanted to go home. Before I left, I passed Dr. Shiva. I remember glancing at him and asking “are you supposed to be someone famous?” Shiva gave me the biggest stink eye for that.

Kyle Chapman had gotten arrested a few days prior and could not make it to the rally.

Two and half years later, “the Proud Boys” are declared a hate group by the Southern Poverty Law Center. The same people who claimed to support “classical liberalism” have either evolved into full-blown Nazis or left the movement entirely. Carl Benjamin attempted a run for British Parliament, and now makes videos promoting a white ethnostate. In 2020, Dr. Shiva tried running for Massachusetts Senate, and has spent the year espousing COVID-19 conspiracy theories. Justin Little has since deleted his YouTube channel and appears to distance himself from the “skeptic” community.

Since that rally, my political ideology has almost completely reversed. I’m now one of those “filthy leftists” I spent two years of my life trying to destroy. I think what changed was that I stopped isolating myself and actually talked with other people. I escaped my ideological bubble and gained new perspectives. I became more skeptical and cautious about what I find on the Internet.

However, I sometimes imagine an alternate timeline where I did not escape the bubble and kept going to Proud Boys rallies, even as the group’s tactics started to escalate and become even more violent. Most of the members of the group are vulnerable people, which makes them easy targets for indoctrination. Their insecurities and fears become easily exploited and used to justify hateful ideas. This is especially prevalent during the pandemic, where people are more isolated than ever.

While I still cringe thinking about my anti-SJW past, I’m somewhat glad it happened. I understand what it is like to be indoctrinated. I know how easily one can get sucked in, but I also know how one can get pulled out.