How “The Boys” flips the superhero standard 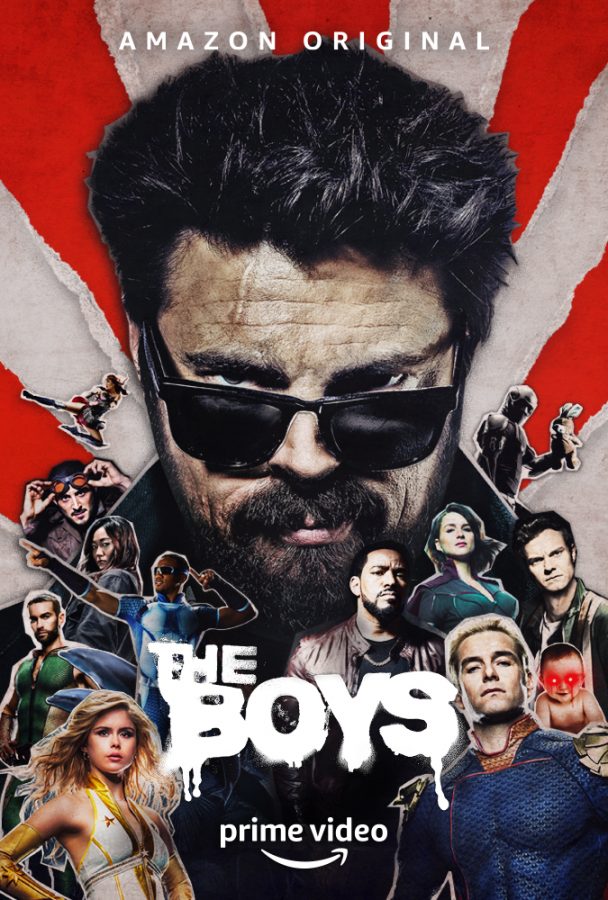 In recent years, superhero-based merchandise and media have been at a resurgence with the release of movies and television series from Marvel and D.C. Entertainment, namely, “The Avengers” and “Justice League” respectively. In these depictions, we often see good guys such as Spider-Man and Batman take on bad guys like Thanos or the Joker. What if the superheroes we generally depict as the good guys in movies had hidden agendas and were actually the bad guys?

“The Boys,” an exclusive Amazon Prime Video series produced by Evan Goldberg and Seth Rogen which is based on a dark and controversial comic book series by the same name, showcases a universe where superheroes are real but all the good deeds they do that are depicted on the news are just PR stunts to increase cash flow for corrupt companies.  Specifically for Vought, the main manufacturer of superhero merchandise and media in the New York City-esque landscape. To combat corruption are The Boys who recognize these hidden agendas. The group of The Boys includes Hughie the tech-savvy underdog (Jack Quaid), Butcher the profane Englishman (Karl Urban), Frenchie the French demolitionist (Tomer Kapon), Mother’s Milk the oddly-named strongman (Laz Alonso) and Kimiko the silent but deadly assassin (Karen Fukuhara).

To those that are familiar with the comic book, the television series strays away so much from its source material that watching it would be a completely new experience. However, with its TV-MA rating, it often showcases similar amounts of violence, sex and other mature content.

The world of  “The Boys” is full of superheroes that act like celebrities and mimic famous comic book characters, but the series focuses on The Seven, a parody of the Justice League and Vought’s main money-maker.

Although the amount of superheroes in the world of  “The Boys” is abundant, they are not the central topic. Through different overlapping subplots, the show has no filter when it discusses the dark themes of revenge, greed, manipulation and much more. Alongside an abundance of dark humor and violence, the show’s writing appeals to people whether they are a fan of superheroes or not.

Both grit and wit are portrayed in the series via the characters’ dialogue.  I often found myself on the edge of my seat because of a tense scene, but then caught off-guard and chuckling because of a witty comment. The show distributes these attributes well.

In a universe with an abundance of characters both powerful and powerless, Homelander (played by Antony Starr who is most known for his role in “Banshee”), a parody of Superman, sticks out as one of the most well-portrayed antagonists I’ve seen in recent years. The Superman-like superhero is shown as America’s pride, bearing the country’s flag as a cape. Underneath the patriotism, blonde hair and blue eyes are the human embodiment of narcissism with a dash of lust and stalker qualities. Whenever he’s in a scene, I grit my teeth because of the uncertainty of whether or not I think he’ll kill everyone in the room with his laser beam eyes in an instant. As the leader of The Seven, he’s the most immoral, but that isn’t to say that the other members are any better.

Hughie is the character that the audience could sympathize with most. In the first episode, this former fanboy of The Seven witnesses his girlfriend being violently run over and killed by this universe’s version of the Flash, A-Train (Jessie T. Usher). Portraying Hughie is Jack Quaid who is well-known for portraying Marvel in “The Hunger Games” series.  The audience sees Hughie teaming up with other characters that all have their vendettas against Vought and realize the abuse of power within the superhero system. Because of this, the group wishes to expose their deeds and halt them altogether. Seeing Hughie go from selling electronics and living with his dad to scheming against the world’s most powerful superheroes is a pleasure that could’ve only been nailed by Quaid.

With superhero movies and shows constantly being released, “The Boys” offers something fresh. Atypical of the more common PG-13 superhero films, “The Boys” is not afraid to tackle mature real-world issues with its intricate storytelling, witty dialogue and a whole lot of gruesome action sequences. After watching this series, what I learned most is to take into consideration how the media portray our daily heroes. Although superheroes are not real, I take every celebrity tweet with a grain of salt now.