It’s hard to make chess interesting, but this Netflix original series does just that 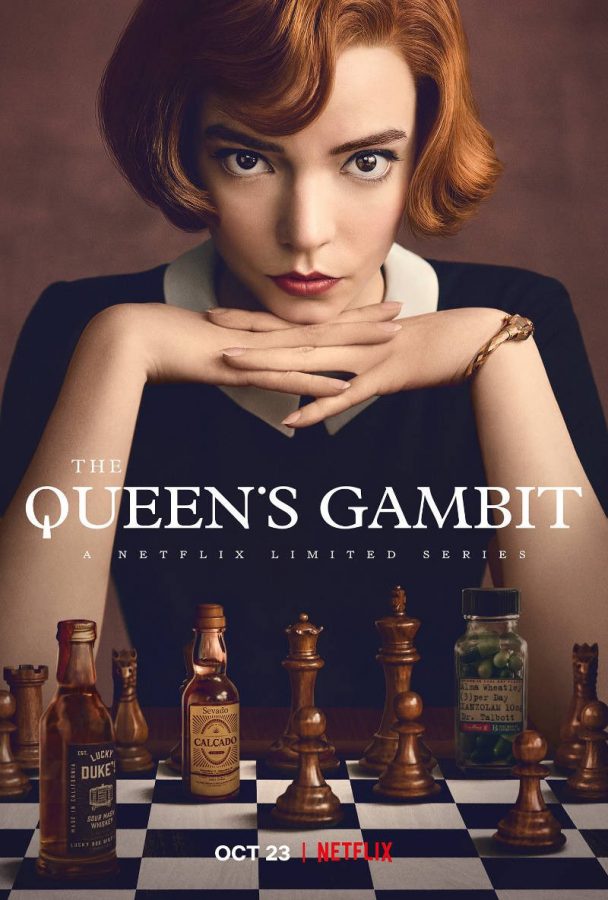 When I think about competition and performance-enhancing drugs, the last thing that crosses my mind is chess. I never would’ve thought that a series whose entire premise revolves around the game would come off as not only interesting but also a more than satisfying journey.

“The Queen’s Gambit,” a Netflix original limited series, highlights an orphaned girl climbing up the ladder to become a world-renowned chess player, fueling her prodigious talent with pills that help her strategize. Unexpectedly, this series about chess has been on Netflix’s list for the top 10 most streamed since its release on Oct. 23.

The aforementioned orphaned girl is Beth Harmon (played by Anna Taylor-Joy who is most known for her roles in “The Witch” and “Split”). She grows up in a routine-driven catholic orphanage where they study, eat meals and take pills to maintain their health. While ingesting one of the pills and playing chess with the janitor in the basement, she becomes a prodigy that can visualize chess strategies in her head. Her skill reaches the point where the audience knows she can best anyone in any competition until her talent plateaus near the top.

After years of practicing and studying chess, Beth gets adopted and really sees the outside world for the first time. She goes to high school as an introverted outcast. Her adoptive mother wants her to join clubs, but instead, she enrolls in chess tournaments, sweeping the competition easily. From there on out, she defeats multiple men in order to become globally-known.

You’d think it hard to make a show about chess interesting, but the writers did it anyway. The games of chess that are played in the show work well as the action sequences. The fast-paced and orchestrated music increases intensity, especially when accompanied by close zoom-ups of opponents’ faces, typically looking defeated when facing Beth. In many chess sequences, there are narrations that describe the intricate strategies of the game. Although I had no idea what any of the terminologies meant, it only emphasized how thought-provoking and stressful a game of chess is. Through these details, the writers managed to transform chess from a classy game of wite into a tactical and psychological war between two individuals. I would’ve thought that seeing so many chess games being played would come off as tedious and repetitive, but instead, it came off as satisfying alongside the great cinematography.

Despite its surprisingly great presentation, chess is only a slice of what “The Queen’s Gambit” has to offer. I viewed it as a coming-of-age journey of a poor underdog girl rising up to prove the people around her wrong. I never would’ve thought that chess could teach me so much about feminism, maturing and the meaning of life.

Themes of feminism begin when Beth’s chess teacher tells her “girls do not play chess.” Not only does Beth learn to play, but at the age of nine, we see her defeating an entire room of high school boys simultaneously.  When Beth experiences her first real sense of competition in a local tournament, her first opponent is an unrated girl named Annette who forgets to work the chess clock despite it being her own. The match is over in 15 minutes. Although the match is not fully-displayed, it is one of the most important matches that bolster society’s perception of women. Annette represents the standard of women in a male-dominated society, while Beth is living proof that women are equally as capable as men. After ‘rookie’ Beth wins the local tournament, she goes from defeating men from her nation to defeating men from her globe in a fulfilling series of events.

Beth spends all of her free time replaying chess games and reading about the game’s history, but she is still human. When the audience first meets her, she is a little girl that speaks very few words. This carries on even when she is adopted and transitions from being educated in a girls-only orphanage to being educated in a co-ed public high school. All of her classmates join social clubs while she’s only interested in chess. Those same classmates are also the ones that tease Beth about her clothes and appearance. Despite initially conflicting with them, Beth decides to implement herself into a social club. Her social life doesn’t stop there, as she starts to have a fondness for ‘the college life’ and a fondness for alcohol which later on causes her downfall. Beth’s journey in chess is complemented by a social aspect as she travels around the world making connections with other chess aficionados, typically those who doubt her at first but cheer for her afterward. The depth of the series is portrayed through the overlapping and complex themes that characterize the developing Beth as someone relatable.

The relationships Beth creates, however, are just as important as the journey she embarks on. The most important person that Beth meets is her adoptive mother, Alma Wheatley (Marielle Heller). In stories where the orphan gets adopted, the relationship between the child and the adoptive parents are almost always deceitful or even abusive. Even though I thought that was where the show was going to take Beth’s adoption, it doesn’t. Initially, Beth and Alma are not on the same page- Beth wants to place chess while Alma wants her to play the feminine stereotype. The dichotomy between Beth and Alma is a conversation of the balancing of life. Beth is blind to the world outside of chess while Alma wants her to know that there are other things out there. It’s interesting to see interactions between the two characters as they start out diverged but end up on the same page.

Another character that stands out to me both characteristically and physically is Beth’s biggest national competitor, Benny Watts (Played by Thomas Brodie Sangster who is most known for playing Newt in “The Maze Runner” series and voicing Ferb in “Phineas and Ferb”). Benny is dressed in a trench coat bearing a cowboy hat and a knife by his side. As he describes it himself, he doesn’t look like the stereotypical chess player, parallel to Beth but for different reasons. As rivals, I found it fascinating how similar yet different the two are and although they compete against each other, they ultimately team up as one collective unit. Sangster’s performance is also extraordinary given how different of a role he plays compared to his past work.

As someone who has attempted numerous times to learn how to play chess, I’ve always found the game shallow. However, “The Queen’s Gambit” has a lot of depth and motivates me to pick the game up again and be my own Beth Harmon.