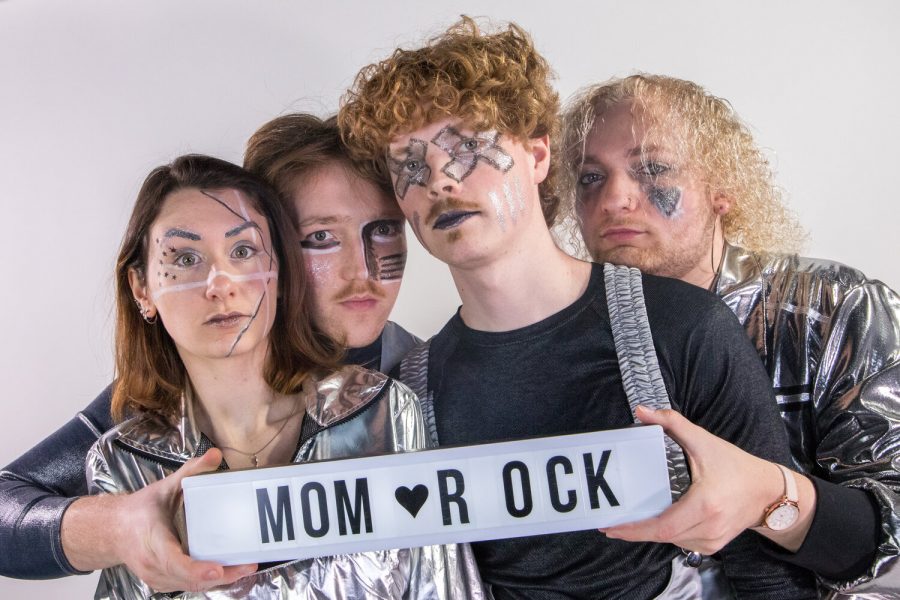 Silver suits, expressive face makeup and overall good vibes embody the spirits and attitudes of Mom Rock, a newly formed rock band out of Boston, Massachusetts. Looking to spread their musical genius, the four members, singers and guitarists Josh Polack and Curtis Heimburger, drummer Wilson Reardon and bassist Tara Maggiulli, met as students at Berklee College of Music, though Polack and Maggiulli had known each other since high school  A shared admiration for Weezer, being avid members of the BachelorNation as well as a passion for songwriting and performing united the four talented artists into a tight-knit group worth paying attention to. The team of four released their first EP “I Wish Every Day was Today” on Oct. 30, after patiently waiting for its delayed arrival to the public after the COVID-19 pandemic hit suddenly in March.

When discussing the timeline of their EP, the band shared, “The songs were written a long time ago (like a year or two) and we’ve been playing them live since then.” Familiar with college basement gigs and smaller yet lively crowds, Mom Rock has missed joining their audiences in-person for nights of chaotic fun, so this EP serves as a reminder that the group is still creating music and better days are clearly ahead.

“One of the toughest challenges we faced during the pandemic was not being able to play live shows to the hugely supportive crowds we were used to pulling inspiration from,” the group said when asked what challenges they faced during the pandemic. Beyond their usual audiences, Mom Rock was invited to Osheaga, a popular music festival held in Montreal. The band considered it a dream gig after seeing some of their idols perform there in the past, but the event was unfortunately canceled due to the pandemic.

Featuring four catchy, feel-good songs on the EP, “I Wish Every Day was Today” truly is a must-listen if you are searching for a soundtrack that will lift you up and generate positive energy. First on the list, “White Funky Groove” hits home with nostalgic sounds of a murmuring crowd at a concert, only for them to grow in noise once the first lyric is whispered through the microphone. Starting out with a slow drum introduction, the beat intensifies as Polack sings about “making a move” and the rhythm reaches the point where it seems like the roof is about to blow off with excitement. When asked what his favorite song of the EP was, Wilson said “White Funky Groove” because I’m in charge,” referring to controlling the tempo.

“I Am the Same” showcases the group’s strong vocals and incredible instrumental skills, with my favorite part being Heimburger’s guitar stretches towards the end of the song. While it is evident that the group is extremely talented, they try not to get too caught up in the spotlight, saying “to us, our music isn’t about showing off our technical abilities, it’s just about our audience having a good time.”

“Afterlife” and “Xylophone” also made the four-song EP, which were the two favorite songs for both Heimburger and Maggiulli. “The Afterlife is just so damn fun to play,” Heimburger shared, while Maggiulli continued, “I think “Xylophone” is my favorite because it’s the most fun for the audience to listen and sing along to, and it’s a crowd-pleaser. But, “The Afterlife” is up there because I don’t take a lot of bass solos but that bassline gives me a chance to stick out.

While on the topic of sticking out, Mom Rock certainly has a unique fashion style, dressing in shiny silver apparel that will, for sure, turn heads. Without access to stage mechanics to enhance their concert experiences, the group shared, “We tried to find other ways of adding an eye-catching visual element to our set and overall look.” Heimburger’s mom actually hand-made all of the silver suits, giving the group an incredibly colorful, yet intergalactic look.

In addition to their release, Mom Rock recently shared a music video for “Xylophone“ after reaching 20,000 streams on Spotify, filled with clips of the group running throughout the city, changing into their metallic costumes with plenty of shiny face makeup, and jamming out in a nearby grassy forest. My favorite verse in the song is “I used to play the xylophone, but now I just sit on the train tracks,” as it creates a picture in the listener’s mind resembling a xylophone.

In my opinion, it’s exciting to see the group come together and make such enjoyable and carefree music during such difficult times. Mom Rock agrees with this idea, saying “We hope it’ll mean something special and unique to everyone who listens.”  Stay tuned for more from Mom Rock, as the group shared that more content is on the way. “We are also about to finish tracking an EP that we’re releasing in the spring, and we’re also perfecting our cinnamon roll recipe.” (Polack and Maggiulli are avid cooking fanatics!)

“I Wish Every Day Was Today” is streaming now on all platforms.