The duo’s debut single “Leave The Door Open” aims to transport listeners to their own gold-plated version of 1970s R&B. 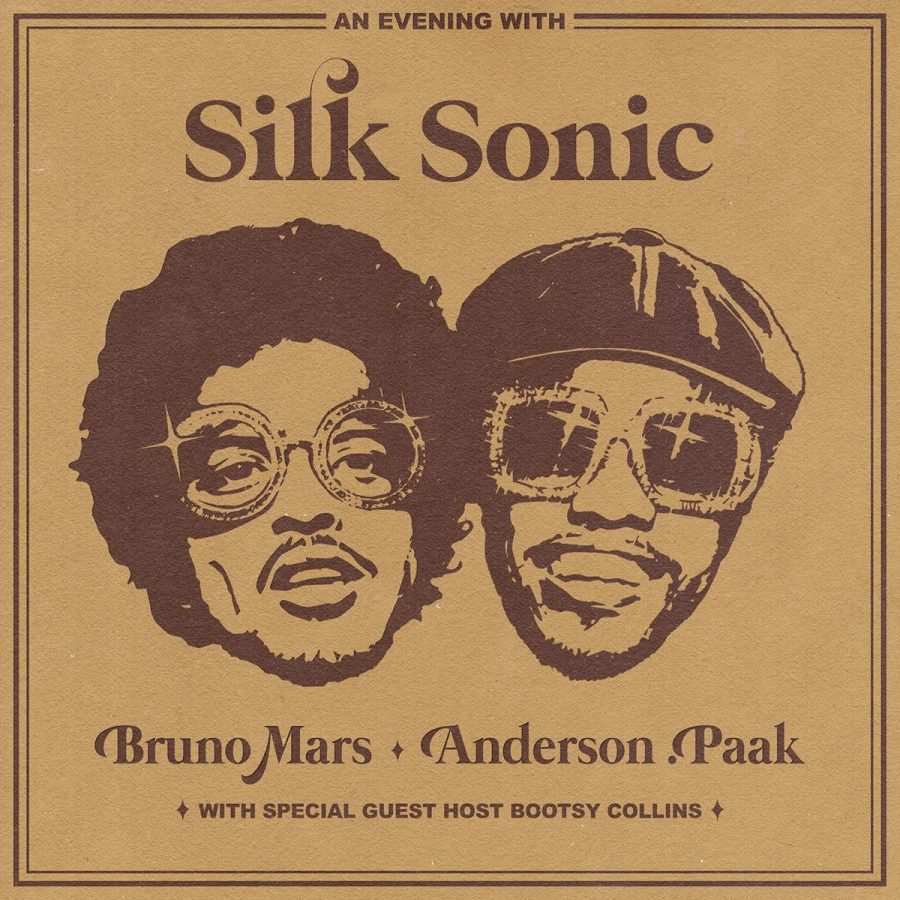 Silk Sonic, a new project group from Grammy Award winning-artists Bruno Mars and Anderson .Paak released their first single “Leave The Door Open” at midnight on Friday, March 5. This is just the first released track on their upcoming album “An Evening With Silk Sonic.”

A week before “Leave the Door Open” and an intro track with Bootsy Collins as the upcoming album’s “host,” was released, Mars announced the track, and Silk Sonic’s incarnation, via Twitter on Feb. 25.

The cover for the single and upcoming album, featuring Mars and Anderson .Paak’s portraits on a mustard yellow background, tell the listener exactly what Silk Sonic’s goal is with their upcoming album: to transport them to the world of 1970s R&B.

Mars, in particular, is no stranger to the decadent 70s influences we hear on “Leave The Door Open.” His 2014 collaboration with Mark Ronson on “Uptown Funk” was a clear indicator of this, and the smooth R&B sound and unabashedly sensual lyrics that we hear on the track are very reminiscent of his 2016 album “24k Magic.”

Anderson .Paak also is familiar with the world of R&B. Although he may be more well known for his features on albums like Mac Miller’s “The Divine Feminine” and Chance The Rapper’s “Coloring Book,” his 2016 album “Malibu” is full of glittering piano, layered backing vocals and playfully intimate vocal performances that listeners will easily detect on “Leave The Door Open.”

On “Leave The Door Open,” however, we see the duo go fully in on creating a 70s R&B slow jam that is as playful and exciting as it is flowing and sensual. The gentle, organic instrumentals might come as a surprise after hearing either member’s prior works, but they work well with both member’s laid back but impactful vocals.

The lyrics of the track, like many other facets of the single, work simply because Mars and Anderson .Paak don’t shy away from them. Lyrics like “My house clean/my pool warm/Just shaved/smooth like a newborn” might come off as goofy or strange in any other context. But because Silk Sonic doesn’t try to take themselves too seriously, and simply dedicates their time on the track to creating a song that grooves with its listener, it just works.

The chorus, although deceptively simple, pulls back on the rising instrumentals we hear leading up to it to draw attention to Mars’ classic ballad-type vocals with the lyrics “I’ma leave the door open, girl/(I’ma leave the door open, hopin’)/That you feel the way I feel/And you want me like I want you tonight, baby/Tell me that you’re coming through,” retaining the same smooth confidence that we hear in the rest of the track.

There is no official timeline for “An Evening With Silk Sonic,” it’s only known that it will arrive later in 2021. “Leave The Door Open” is currently out on streaming platforms.