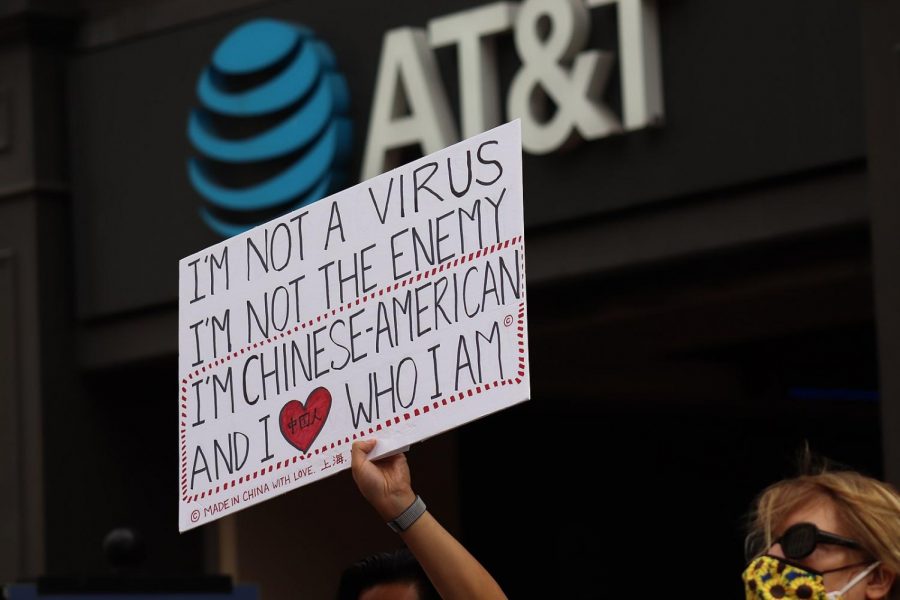 With his mouth agape and both thumbs still suspended in the air, held up to a now-empty street, Brendan Qi stood paralyzed on the sidewalk replaying the previous ten seconds of his walk to Franklin Dining Commons. He knew he had left the Fine Arts Center and made a right onto North Pleasant St. He remembered mulling over what he might get for dinner and how soon he would return to his dorm in the Honors College.

Preoccupied, Qi registered only a muddled contour of the black Jeep emerging beside him before he heard its driver– a young man, the car’s sole occupant– shout in his direction “it’s your fucking virus, fuck you.”

“I gave him a thumbs up because that’s what you do when people shout things from cars when they pass you,” he says. “But, for the first day, I was pretty freaked out. I’d been walking to get dinner, and suddenly I was slightly afraid and paranoid of even seeing people.”

It wasn’t the first time Qi experienced racism or harassment– in fifth grade, his bullies branded him “panda,” ridiculing both his weight and his race with one snide dig– but Saturday was different. Only four nights earlier, eight Georgians were killed in three massage parlor shootings in the Metro Atlanta area, six of them Asian and seven of them women.

“I don’t think the people who bullied me [in middle school] were the most heinous, racist people, although it was pretty hurtful,” says Qi, who is Chinese-American.

“But [the on-campus incident] made me realize there can be very hateful individuals, and that they have the ability to cause real harm. It’s very different when you read it from a newspaper and you just think it’s some random nutter in Texas or in Georgia. It made it really real that there can be really racist, really disgusting people everywhere,” he says.

Qi placed a call to the UMass Police Department (UMPD) Saturday night. The dispatch officer took down the details of the incident, but the absence of other witnesses and Qi’s limited recollection of the car’s driver and its license plate prevented him from pursuing an investigation.

“[The officer] was very kind and very professional, but they couldn’t do much for me,” he says. “I would say I’m satisfied, perhaps I’m not. I didn’t have super high expectations.”

UMass students who experience or witness bias incidents, a catch-all term used to categorize conduct or speech that falls short of the legal criteria for a hate crime, can report these incidents through the university’s grievance procedures– a series of reporting forms processed by the Student Conduct and Community Standards Office, the Office of Equal Opportunity, UMPD and others.

Campus spokesperson Mary Dettloff says administrators are aware of social media posts relaying recent experiences with anti-Asian and anti-Asian-American sentiments at UMass and “encourage students or staff who are experiencing hate speech to report it.”

Detloff says “university offices have received no recent official reports of incidents from students, faculty or staff,” later saying Qi’s incident report filed early Saturday night with UMPD “may have been misfiled in their record system.”

But the perception of grievance procedures as futile and bureaucratic dissuades students like Andrew Zhu, a sophomore Resident Assistant, from reporting their experiences with hate speech on campus.

Zhu says “my impression of the police– and it could be unwarranted or baseless– is that, if I were to report an incident like this, they aren’t going to go back and look at the security camera footage and my experience is just going to end up as a statistic on an end-of-the-year report.”

On Tuesday, March 16, hours before receiving news of the Atlanta shootings, Zhu says a driver and three passengers heckled him as they drove by the Isenberg School of Management, calling him homophobic and anti-Asian slurs.

The incident left him perplexed and disoriented– Zhu says it took him at least ten seconds to remember where he was.

“You take a person who thinks racist things but stays silent, and you put them in a car– if they’re walking by me, I might confront them, but, if they’re in a car and yell something explicit at me, I can’t do anything about it,” he says.

He didn’t report the incident to campus authorities, but instead deferred to the UMass subreddit, an online forum nearly 10,000 members strong, for support:

In subsequent posts and in the comments below his own, Zhu and other Redditors commiserated over the lack of accountability that emboldens assailants and leaves minority students feeling vulnerable and impotent. “UMass doesn’t make racists, but people bring their prejudices into this environment and the school doesn’t force them to confront what’s wrong with their prejudices,” he says.

If Zhu had reported overhearing a white student in the Southwest tunnel deride his friend group last year, jeering “here come the Asians,” or if he had reported the hate hurled in his direction near Isenberg last week, those incidents would appear on the university’s Bias Incident Report, a page that aggregates the location, date and description of each reported bias incident.

The Office of Diversity, Equity, and Inclusion says that it intends to update the report on a weekly basis. The last reported incident was an “offensive slur used in [a] class setting” on March 2, 2021, nearly a month ago.

Incident descriptions have also become increasingly vague during the pandemic– for the Spring, 2021 session alone, the Incident Report categorizes four incidents of the six total incidents displayed on its website as an “offensive slur used in-class setting.”

Following the fatal Atlanta shootings and in response to a growing wave of nationwide Anti-Asian violence, Chancellor Kumble Subbaswamy issued a statement condemning “hate and intolerance in all its forms.”

But students like Zhu, who experienced on-campus racism as early as the first week of his freshman year, insist UMass has not done enough to protect its students.

“I would like to see some form of acknowledgment of the racism on campus, like real and actionable acknowledgment. A lot of people know the Asian experience, but it’s almost more offensive that it’s a known issue and there’s no willingness on campus to do anything about it,” Zhu says.