A ride to activism 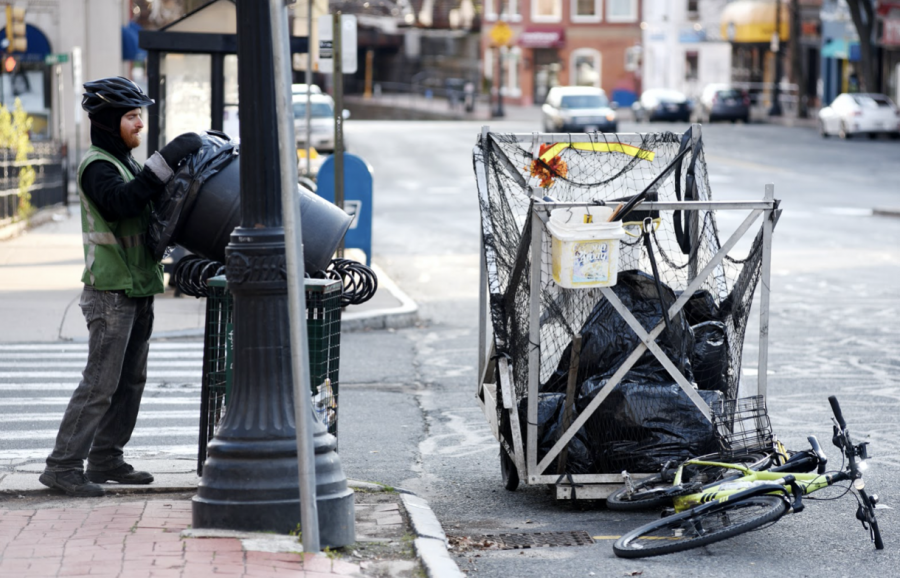 Ethan Tupelo, a member of the Pedal People, empties a trash can in downtown Northampton in April 2020.

What can a few people do to fight climate change in a world with 7 billion people?

Ask Northampton city councilor Alex Jarrett, who co-founded The Pedal People in 2002 and estimates he has saved about 151,000 pounds of carbon emissions a year from going out to the atmosphere.

In an attempt to keep the air clean and reduce carbon emissions, Jarrett helped start a small, local business he wasn’t sure would survive. 18 years after the start of that business, he now serves as the region’s new Ward 5 City Councilor.

About the Pedal People

The Pedal People is a group of worker-owners that regardless of weather,  pull a trailer full of garbage, recycling and compost bins on bikes. The mission is to use human power as a viable alternative to fossil fuels without using big trucks and promoting sustainable community-wide waste practices, such as composting.

Large Diesel garbage trucks, the ones we see picking up our trash and recycling across most cities and towns, contribute to tailpipe emissions, a serious threat to human and environmental health. In recent years, more trash and recycling trucks have become powered by condensed natural gas as an environmentally friendly alternative. Yet, while natural gas in vehicles emits less carbon dioxide than burning diesel, the drilling and production of natural gas leak methane, a potent greenhouse gas.

Yet, Jarrett and his fellow cooperative owner-workers found a more sustainable model — bikes. Bicycle riding uses minimal fossil fuels and is pollution-free. It also reduces the need to build, service and dispose of cars.

“We just saw it as a way to both reduce emissions and to not have these huge trucks, which not only tend to pollute tremendously every time they started and stopped but also cause a lot of damage to the roads and to the residential streets because they are so heavy,” said Jarrett.

In December 2002, Alex Jarrett and Ruthy Woodring decided to start the cooperative together in the hopes of turning their love of bicycles into a business model. They saw that the city had a municipal service for trash and recycling, and started their business with just two customers.

“We had no idea at all if it would work,” said Jarrett, who at the time could not foresee what would happen. Slowly, over the years, the organization has taken off with operations for more than 1000 households and more than 30 businesses.

Jarrett said that at first, he felt strange about the work he was doing. People laughed at them. He was often asked what the cooperative was thinking. Yet, over time that changed.

“Over the years, instead of it being this strange thing, it became this service that people took on as part of the identity of Northampton,” said Jarrett. He credits a big part of that transition to a city contract they received in 2007.

He highlights that shift as a way to mold a path moving forward.

Unlike most trash pickup services, Pedal People offer compost pickup. According to the Environmental Protection Agency, food waste makes up about 22 percent of all discarded municipal solid waste. According to a 2019 article by the Daily Hampshire Gazette, most food waste that gets discarded in western Massachusetts ends up in landfills, where it produces methane when it breaks down. However, when food waste is composted it becomes nutrient-rich soil or can be converted into clean energy at anaerobic digestion facilities.

“It’s so essential we change so many of the things that are considered normal now. We make it normal instead of driving everywhere to take public transportation, or to bike or walk. I’m fascinated by how we can have that happen,” Jarrett said, who brought up the role legislation has in those larger cultural and economic shifts.

The cooperative recognizes that environmental sustainability is not possible without social equity, so the business model works to challenge systems of oppression and unequal power.

“We knew from the beginning that we didn’t want to be a traditionally organized business,” said Jarrett.

Currently, there are about 20 workers who do the work independently in terms of going out to the various routes for their clients. The cooperative also has a contract with the City of Northampton to empty the trash and recycling barrels that line Main Street and other downtown areas.

According to Jarrett, the largest part of the business is recycling, trash, compost and pick-ups. The team also does yard-care like mowing. Someone from the team is out every day, with some days being busier than others. Team members work between three and seven hours at a time.

In case of storms, the team will rarely call off their routes. Jarrett said they have what they need, “whether it’s equipment on the bikes or equipment on our bodies to be able to be out in whatever weather.” They are currently still providing their services amidst the COVID-19, taking extra precautions during this time.

Jarrett decided to run for office after a seed was planted in his head one evening.

“I just got the idea like I really want to meet everyone in my ward, or everyone that I would represent,” said Jarrett. “Especially with issues of climate change and wealth inequality, we’re not seeing action on a national level. We’re not seeing enough action on the state level, and so municipalities are the ones that need to take the lead.”

One of the major issues he ran on was climate change, and a promise to take “radical and immediate steps to minimize and mitigate the worst of those effects,” according to his campaign website. He supports a transition to 100% clean energy, setting new standards for energy use in municipal buildings and vehicles, requiring new municipal construction meet zero-net-energy standards, encouraging composting, planting more trees to reduce net forest loss and continuing to expand conservation area holding to reduce development in the city’s outskirts.

Jarrett said that his position and civic engagement were the cornerstones of his campaign, which led him to go door to door managing to reach 90% of the doors in Northampton, where he was able to see what was important to people.

Within the frame of climate justice, Jarrett also ran on principles speaking to the community’s wealth inequality, civic engagement and housing affordability.

“I knocked on the doors of people who said, ‘I’ve lived here for 20 years and no one’s knocked on my door.’ Those were usually in public housing or other neighborhoods where people have been ignored.”

From his work with The Pedal People to the city’s councilor, Jarrett has hoped to make a more environmental and social community by engaging in just that conversation, in just that question.

What can an individual voice do to make a difference? A whole lot.