Lightsaber duels transport UMass to a galaxy far, far away

The Draglagos Jedi Academy aims to turn the antagonism of the lightsaber duel, a notorious big-screen stunt, into a collaborative pastime 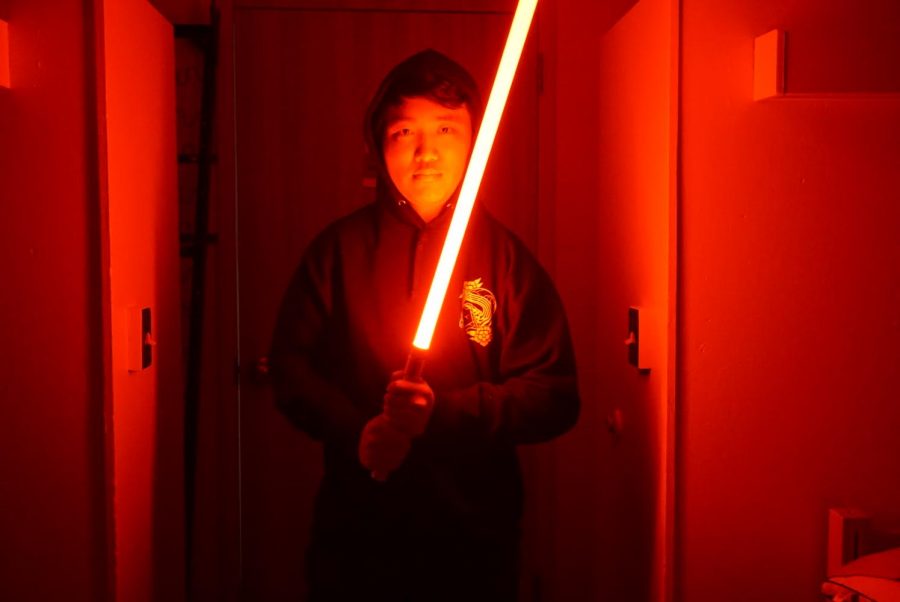 (Alex Qi poses with one of Frank Catalano’s lightsabers, exchanging his PVC saber for a red, light-up blade. Photo submitted by Rebekah Panaro.)

Every Saturday and Sunday evening, Frank Catalano heads to the campus pond armor-clad, donning a medium to heavy grade fencing mask, a pair of men’s lacrosse gloves and a Jedi robe, a black, floor-length toga fit for a galaxy far, far away.

“I’ve lived inside of Star Wars since my childhood,” he says, “I brought my light-sabers with me [to college] because I knew there was no way I was the only one.”

Catalano’s instinct was right. At UMass, he found the nascent Draglagos Jedi Academy, a hyperlocal Discord server for Star Wars enthusiasts, and began recruiting its members to scrimmage on the weekends. Logging onto the server for the very first time, he announced to his peers assuredly “your Jedi Master has arrived.”

He didn’t know then that the group’s founder, Rebekah Panaro, had seen him earlier in the semester carrying his lightsaber conspicuously across campus and created the group as a ruse to befriend him.

“When I came back to campus, I saw Frank on my friends’ [Snapchat] stories prancing around [Orchard Hill] with his lightsaber,” she says, “and I thought, you know, ‘who is this guy?’ I think that’s what everyone thinks when they first see him, but I just knew we had to meet.”

Panaro input keywords into a fantasy name generator and promoted the newly minted Draglagos in several UMass-based subReddits, including the Orchard Hill forum, crossing her fingers until Catalano arrived. The ruse worked, not only attracting Catalano but to securing the group’s now more than 40 members.

20 padawans, or apprentices, joined the Draglagos’s first Duel Day, the majority of them having never fenced in their lives. They train in open, shared spaces– besides the pond, at the base of Orchard Hill, in the Campus Center basement– and aim to turn the antagonism of the lightsaber duel, a notorious big-screen stunt, into a collaborative pastime.

“We meet and we duel, and we come prepared not to hurt each other but to help each other,” says Catalano. “We wear the gear to make sure we’re safe, and we wear masks to be healthy, but we just want everyone to have some fun and enjoy spending time together.”

Catalano’s investment in dueling remains unrivaled by any of his peers– while most duelers don’t own a single lightsaber. He owns four, some automated, others dual-bladed, others still voice-activated, a feature he configured himself fiddling with the saber’s circuit board.

Catalano has ADHD and says dueling “helps me get through the day,” but he recognizes a collection of equipment like his isn’t financially feasible for most college students. He often lends his sabers to other Draglagos members, his padawans, but recently they’ve found an alternative solution.

In early March, Panaro and Alex Qi, a junior economics major, visited the Hadley Home Depot and, using a 33-inch PVC pipe and an aluminum pop-up drain, fashioned their first makeshift saber. It holds up in combat, says Qi, adding he “knows it’s very possible for dueling to become inaccessible, but $30 options from a hardware store down the street mean everyone can participate.”

“Maybe it doesn’t light up or make cool sounds, but you’ll learn the basic motions and feel like you’re being included,” says Qi. Inclusion is the goal, he says, when “we know what it’s like to feel excluded or unwanted or looked at like we have five heads.”

Last month, Catalano and another student were verbally accosted by a motorist while dueling near the Campus Pond. The driver yelled at them to “shove that [lightsaber] up your ass,” Catalano recalls, sharing he’s happy none of his other peers were present during the incident but not surprised by its occurrence.

“I like being myself,” Catalano says. “Some people will laugh at us, yell mean things out of their cars as they pass by, but if you don’t like it, I don’t care.”

Panaro says her first time dueling was a lesson in forbearance– “they’re staring, just looking and shaking their heads, and you can tell that they’re judging us” she says.

“Some people will even use [social media] as a tool just to laugh at us,” says Panaro, but she says her goal is to help students with a fanaticism for fantasy feel “protected and included when mainstream campus life ostracizes them or makes them feel like they don’t belong.”

In the meantime, she says, the Draglagos will continue practicing, recruiting padawans and pursuing the “beauty and precision” of George Lucas’s original intergalactic dance, the lightsaber duel.

“I try not to focus on what goes on around us because I’m having fun,” Panaro says. “Weirder things have happened at UMass.”