Amid allegations of a woman being roofied at the fraternity, UMass students took the streets to protest against frat culture. 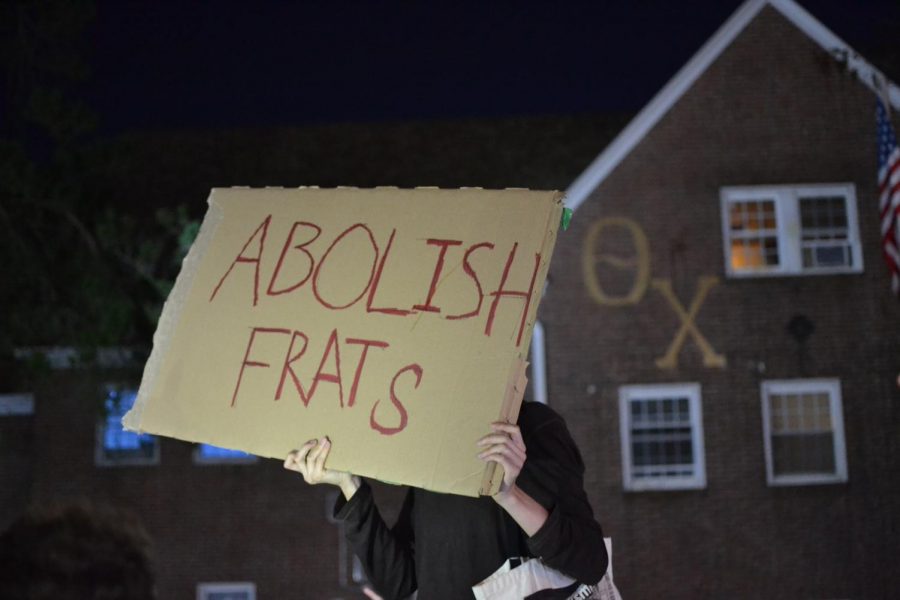 A protester's sign in front of the Theta Chi house. By Abbie Gracie

Amherst — On the night of Saturday, Sept. 18, multiple police cars and ambulance trucks sat outside Theta Chi, one of the two fraternities not on Greek row.

Word quickly spread through Yik Yak, an anonymous forum that allows people to post 200 characters which can be seen by people within a 5-mile radius, that a girl was allegedly roofied and sexually assaulted at Theta Chi.

This lit a fire under the UMass community and an estimated 300 protestors took to the grounds of Theta Chi around noon on Sunday to protest against their alleged wrongdoings.

Word quickly spread that there would be another protest at 7 p.m. at the Chancellor’s house.

Many people showed up to support the victims of sexual assault. The protest grew as the group decided to march down back to Theta Chi.

The protesters went down Orchard Hill and by Franklin Dining Hall to Theta Chi, proudly showing their signs and chanting, “F— Theta Chi.” Almost every car that passed by honked their horns in agreement.

When the group reached the fraternity house, people gathered on both sides of the street, careful to not touch Theta Chi’s lawn and keep the protest peaceful.

More middle fingers and more chants were thrown, with many protesters taking to the megaphone:

One Theta Chi brother came to the window to record the scene, but this only made the crowd more infuriated.

A protester took the megaphone and yelled that the brothers couldn’t hear the crowd and they would need to turn on their phone flashlights.

So the crowd did as they were told.

The Amherst Police stood by the scene, but eventually told the crowd to get off the lawn and move to the Newman Center driveway, right next to the house.

The crowd filled the entire driveway, screaming for the brothers to show themselves and take accountability for their actions.

Some brothers did appear and allegedly flashed firearms, according to spokespeople at the scene’s megaphone. This encouraged some of the crowd to disperse and carry on their protest at the Whitmore Administration building.

Others stayed at Theta Chi, tearing down the fence that once stood around the house and shoving pieces of it into windows that were broken by thrown rocks.

A few protesters found cars of the brothers, broke the windows, slashed the tires, spray painted the license plates and even tipped a car over.

Around this time state police arrived with riot gear, threatening to shoot rubber bullets and tear gas at the remaining protesters and prohibited protesters from standing on Theta Chi property.

The Student Government Associated issued a statement on its Instagram page at midnight condemning the alleged sexual assault as well as demanding the university to implement the Survivor’s Bill of Rights. The UMass administration sent an email responding to the protests on Sept. 20.

Another protest occurred outside of the Whitmore Administration Building at noon on Monday, Sept. 20.

The Amherst Wire has not been able to verify the allegations of sexual assault by Theta Chi members at this time.