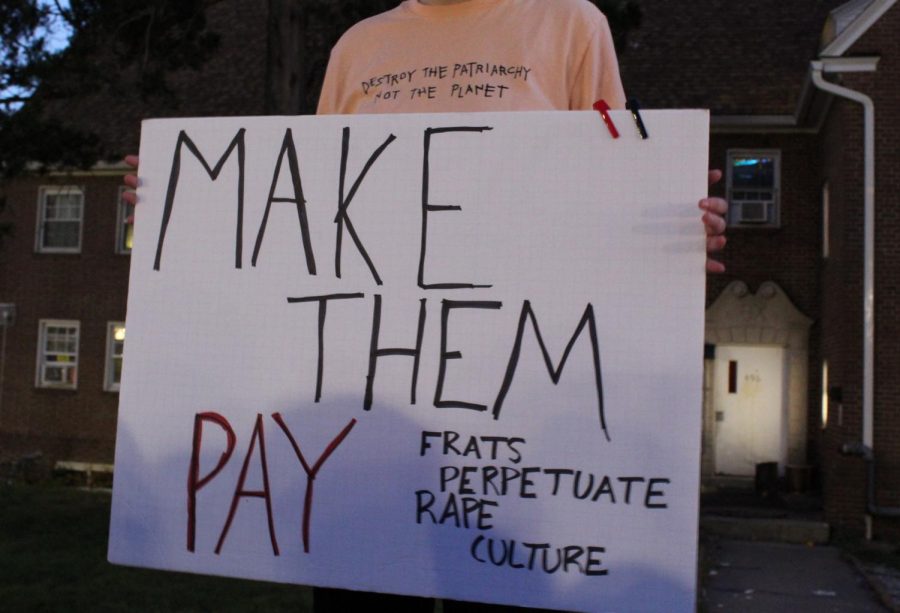 I want to start this off by saying that I am privileged in the sense that I am not a survivor of sexual harassment or assault. I stand with survivors & want to make clear that sexual violence in any form is unacceptable and should not be tolerated. Also a trigger warning for mentions of sexual assault and harassment.

White Greek life, in particular straight white male Greek life, is toxic. The ways in which it is allowed to get away with sexual assaults, rapes, sexual harassments and more speak to the power of white supremacy, patriarchy, and the interlocking systems of oppression that uphold them. Cishet white men get away with a whole lot of stuff, and it’s because of money and privilege that they can do so. The recent protests at and around Theta Chi prove this.

Between Sunday and Monday various protests took place where people spoke about their experiences, found community with each other, and began forming plans to hold the fraternity and UMass itself accountable for the lack of action against Theta Chi but also other fraternities that have committed acts of sexual violence. Sunday night’s protest did turn violent at one point, but that should not overshadow the fact that this university has consistently failed to end rape culture on campus, whether it be from fraternities or other areas.

If it was a majority Black or PoC frat, best believe the full force of every police department with 20 miles, parents, brothers, uncles, friends and more would descend on campus and go after every non-white man or male-identifying person and make our lives hell until they found out who did it. Why isn’t that same energy applied to entitled white boys and their friends? Two answers come to mind: money and privilege. They’ve gotten away with things for so long that they think they’re immune to consequences, but these protests have proven otherwise.

This intense response transpired because rape culture is unfortunately common within fraternity life. Theta Chi is not the first and will not be the last to allegedly hurt young women on campus, especially if nothing changes.

These protests are a reminder that fraternities need to be held accountable for their actions, and the only way to do this is by not letting them or the university sweep their unjust actions under the rug, in hopes the community will forget about them.

There will be another protest on Friday the 24th at 3, where students will walk out of their classes and head to the Chancellor’s office in the Whitmore administration building.