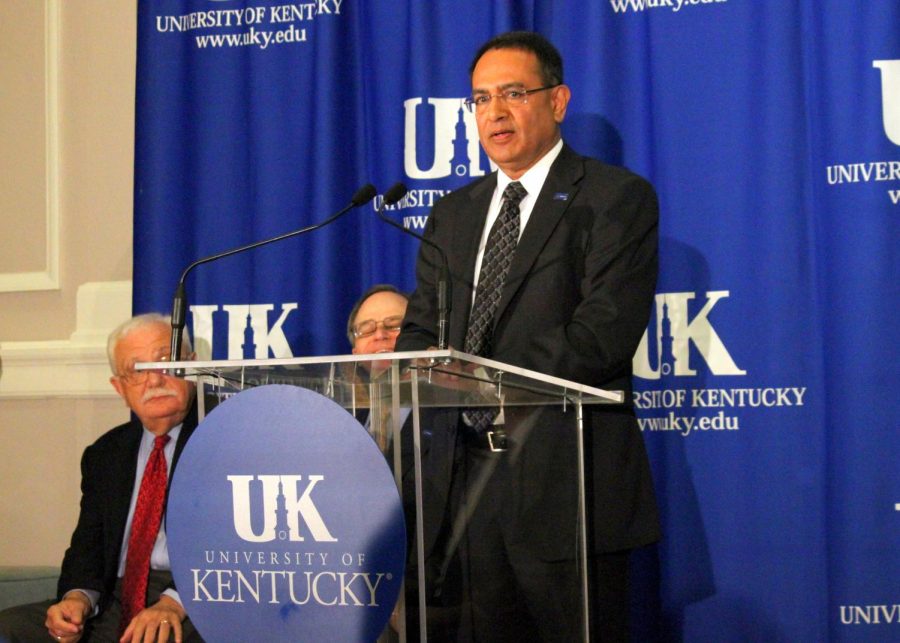 “Of the racist e-mail, Subbaswamy said, “All it takes is one really deranged or highly, highly, frustrated individual to throw a hand grenade like this.” “I absolutely agree that it’s our responsibility as an educational institution to instill that level of understanding, as well as, if nothing else … dignity and respect,” he said. “But, again, if somebody harbors deep racist feelings, then it’s hard to deal with that.”

The above are quotes from a Boston Globe article Chancellor Kumble Subbaswamy is featured in. The article centers around the anti-Black racism and sexual assault protests that have occurred on campus at UMass Amherst recently. I find it abhorrent yet unsurprising that the language above was used. Not only ableist but also a dangerous misrepresentation of the situation. The chancellor is neglecting the fact that there have been racist attacks against Black students since the early 60s, and nothing has been done to quell them. It’s not just “one individual”, but multiple every year that are allowed to fall under the radar because UMass thrives off of racism, white supremacy, settler-colonialism, imperialism, homophobia, transphobia, white nationalism, misogyny, xenophobia, and more.

Every 4 years the cycle repeats itself, and nothing ever gets done to address the systematic issues I mentioned above. The chancellor has been in this role for almost 10 years, and in that time he hasn’t improved the campus climate at all. In my opinion, he has made it worse. By allowing those who subscribe to white supremacist ideology and hate to remain on this campus, he puts marginalized communities in danger. I feel unsafe when I read that someone thinks I should have my reproductive organs surgically removed. It cements the idea that my life does not matter on this campus, that I am simply a commodity, a quota to be filled.

Why hasn’t he engaged with the illustrious W.E.B. Du Bois Department of African-American Studies or the Du Bois Center in the library? Why were neither of them mentioned in either email he sent out? Afro-Am serves as a space where the majority of the diversity gen-ed courses are held, and the department is stretched thin. They need to be fully funded, faculty need to be there, students need support, and more. The Du Bois center does great work in order to let people get to know who Du Bois was beyond his many pieces and studies, and they look at what made him tick. It is a disservice to both places to not include them in the conversations around Black student safety.

In an email sent to the campus community yesterday, he said “Stroz Friedberg will use similar techniques to provide guidance on whether the emails to UMass Black students were an isolated matter or part of a larger white supremacist campaign”. In my opinion, there have been consistent white supremacist campaigns that have occurred since Black students were first given access to this institution, and nothing has been done to make Black students feel safe since that point, so I find this statement insulting. He also said “I want to assure you that evidence gathered through the investigation leading to the person or group responsible for the hateful, racist emails will be shared with law enforcement officials for potential criminal prosecution. Currently, it is unknown whether the perpetrator is part of the campus community or not at all affiliated with UMass. If the source is someone in the campus community, that person will face severe university sanctions, up to and including expulsion or employment termination, as well as a referral to the District Attorney for criminal prosecution”. I’m glad these options are on the table, but where was this energy when the Melville hate crimes were happening? Why were students told not to say anything, that admin needed our help in order to find the people responsible, that UMPD was actively looking but we had no real updates?

To end the email, the chancellor said “Finally, I want to reiterate that we are committed to on-going support for our students who have been victimized by these hateful, racist emails and other acts of racism that have occurred this semester. In meetings with some of our Black student leaders over the past week, my leadership team gained valuable insight on how we can more fully realize this commitment. I pledge to you that we will do everything within our power to alleviate the burden that these racist acts have placed on our Black students. In doing so, we will redouble our efforts to foster a campus community grounded in justice, equity, dignity and respect”. What I’ll say for myself is that it is not my job or my responsibility to educate those in greater positions of power on how to do their jobs. However, I have done that repeatedly over the last three years, and it’s exhausting. If people from affected communities are expected to do this, we should be paid as such. Deem us DEI consultants and pay us! If not, go to Google. Empty promises and slogans don’t mean anything, chancellor. You and other members of the upper administration were given a specific list of demands in the summer of 2020 to implement, and so far virtually no progress has been made. Start with those, then work your way backward till you get to the demands students made in the 60s-70s and make sure each and every single one is put in place. Otherwise your words mean nothing and you remain a figurehead.

I have no real faith in this institution. I want to be able to graduate in one piece without having to worry if my safety is at risk. As long as white supremacists are allowed to run free without consequence, it increases the likelihood of violent acts being carried out. I’d say do better UMass, but you won’t. UMass does not care about me, it never has, it never will. I only hope to get my degree and do what I can in the future to be a changemaker. The only ones that got us are us, no one else.