The UMass Amherst NAACP chapter held a march from the Student Union to the Whitmore Administration Building to make UMass leaders hear their demands, yet they still locked their doors even though they knew the march was going to occur. 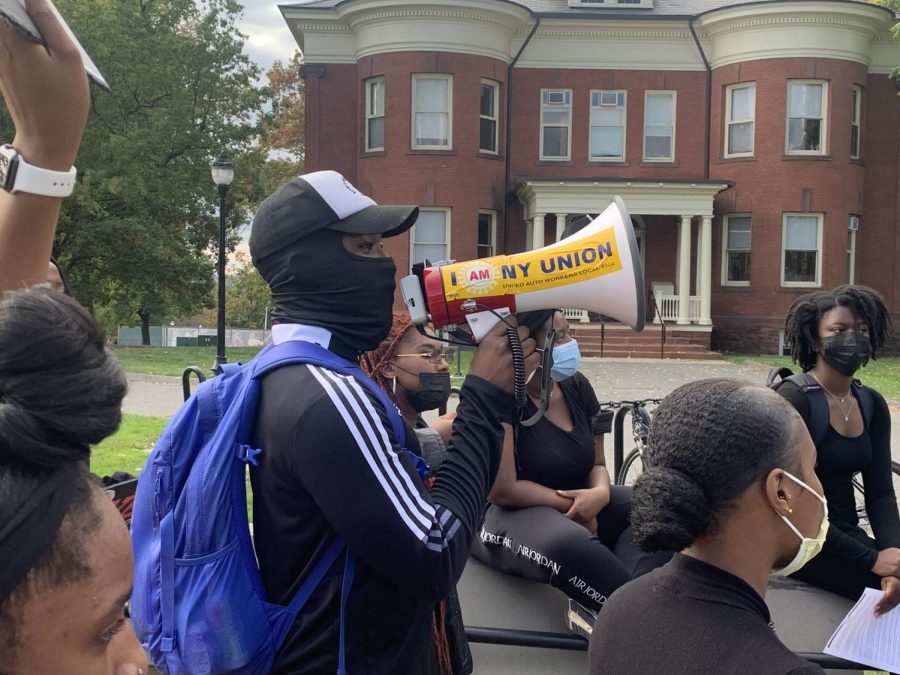 *It is important to clarify that Tristan Smith is working in the office of Diversity, Equity, and Inclusion this semester. His affiliation had no impact on his reporting.

The UMass Amherst NAACP chapter marched through the halls of the university’s Whitmore Building in the early afternoon. A list of demands in hand, the hundred-person congregation walked quiet as kept, fearing possibly being removed before they can reach their target destination: Chancellor Kumble R. Subbaswamy’s office. White administrative members brushed past the crowd, ignoring the student activists and taking refuge in their respective offices. Once the UMass NAACP group arrived at the chancellor’s office they were greeted by an empty chair, Subbaswamy was nowhere to be found.

The group directed their attention towards the office adjacent to the vacant Chancellor’s: The University Department of Diversity, Equity and Inclusion office.

After handing over the list, Osinubi told the chief officer that none of the Black students on campus enrolled into the university to “be called a Nigger.”

UMass NAACP collaborated with Black Registered Student Organizations and Student Advocacy groups in the creation of the 14-demand list.

The demands were created in response to the disturbing emails sent to Black-led university organizations last month. The list also addressed the university’s exponentially growing list of hate-based bias incidents; 10 acts of discrimination have occurred this semester alone.

“The failure of a timely, adequate, and professional response to the racist attacks on Black students of the university has prompted the NAACP to formally demand change of the university’s administration and community culture,” the letter read.

The list demanded that the university make a “public apology” to Black students and RSO’s, for failing to properly respond to the inflammatory email in a timely manner.

Walker stated that the demands were reflective of the experiences that Black students have had on campus and defined the moment as a “reflection point” on the UMass campus.

The university is well-known for its activism and its social justice-minded teachers like James Baldwin, Ekwueme Michael Thelwell and John Bracey, revolutionaries whose influence has carried on into the UMass Amherst population to this day.

Well-aware of the university’s historical advocacy, Walker recognizes the demonstration, demands and energy of the students as “the real stuff that we need to give serious consideration.”

The university provided an update to the investigation on Oct. 6. University officials stated that evidence was still being gathered by the cyber security firm.

DEI Deputy Chief Officer Adero said there’s a disconnect between what the university believes it’s doing for its students of color and the “obvious impact” these events have had on the UMass minority population.

UMass NAACP President and senior biology major Tina Noel was the lead organizer of the demonstration.

Noel said that the UMass NAACP held a meeting with university Vice Chancellors and Dean of Students informing them of their plan to deliver a list of demands to the Chancellor’s office.

“We want to work with them and make a change,” said Noel, “We don’t want to cause any chaos, we just want to be heard.”

To Noel and her cohorts’ dismay, outside of the Diversity, Equity and Inclusion officials, UMass administration failed to communicate to the activists. Choosing to close their doors and resume with their regularly scheduled workday.

The student organizers never expected to see the Chancellor, “He’s never around. You never actually get to see him on campus,” said Noel.

“That was not okay because we were peaceful; we were quiet; we gave you guys a heads up. The least you can do is try to hear us out, but you lock your door and then after we leave you unlock your door. I feel like that was kind of disrespectful and like they didn’t really take our march seriously.”

The student activist expect a University email to enter their inboxes in the coming days.

“I can 100 percent guarantee you the Chancellor will send another bullshit email,” said Osinubi. “And the worse part about it is he knew there was going to be a protest and purposefully decided to not show up to his job.”