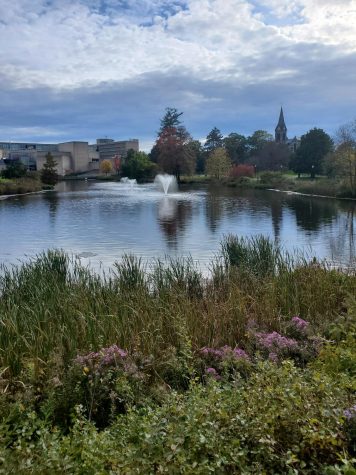 With an increase of anti-Black hate crimes on campus, it’s time for everyone to step up and help the Black community at UMass.

On September 23, 2021, Vice Chancellor & Chief Diversity Officer Nefertiti A. Walker, sent an email to students explaining the recent hate crimes and incidents, saying, “To begin, an anti-Black racist email was sent to numerous Black-centered student groups. The content of these emails is vile, blatantly racist, and violently offensive. In addition, there have been other acts of anti-Black hate imposed on our community through the “Contact Us” online forms of registered student organizations, as well as an incident involving the offender driving by and yelling an anti-Black racist epithet at a group of Black students”. While it is the responsible thing to do, acknowledge these hateful incidents and condemn them, this email came very late and after an op-ed and the screenshots of said racist email were released–and after they had a collection of such incidents. Not to mention that our Chancellor, Kumble R. Subbaswamy did not make a public statement on these cowardly, disgusting crimes until four days later.

In his September 27th email sent to students, Subbaswamy says “I want to share with you today that we have secured the services of Stroz Friedberg Digital Forensics, a leading national firm in cyber security, to assist us in our investigation of the source of the racist emails that were sent to members of Black student organizations”. In a follow up email sent on October 6th, Subbaswamy tells students that the outside firm they hired has begun to search for the person(s) responsible for the racist email, then saying, “Stroz Friedberg will use similar techniques to provide guidance on whether the emails to UMass Black students were an isolated matter or part of a larger white supremacist campaign–Currently, it is unknown whether the perpetrator is part of the campus community or not at all affiliated with UMass”. These sections of the chancellors email completely undermine the severity and seriousness of these incidents.

First, this is not the only anti-Black incident to happen in the last few months or years (Melville); thus, this is not isolated, in fact it’s becoming common. Secondly, whether or not the person(s) that wrote the email are a part of the UMass community is irrelevant. What they did is still traumatizing and harmful to all Black students, faculty and staff within UMass. Thirdly, only focusing on this one specific incident and ignoring all the others, is missing the point entirely. Black students, faculty and staff on this campus want to feel respected, safe and welcomed. Even if the outside firm is able to track down those behind the email, there are still people that share the same racist, harmful ideologies as them on campus. There will still be people on this campus that make their Black counterparts feel uncomfortable and alone. Admin being barely reactive rather than proactive to situations like this is part of the problem. These racists feel emboldened and invincible with the school’s lack of accountability, which encourages them to keep doing harm to the community.

Students on campus are also not helping or supporting their Black peers. Posting about hate crimes on social media cannot be the end all when it comes to advocacy. Posting once in a while about these things does nothing for the Black community at UMass if you’re not actively looking for ways you can help and be an ally. It was disappointing to see that Black student organizations were essentially the only ones pressuring Admin for help and guidance and looking for ways to bring the Black community together for them to be seen and heard. Why were Black students the only ones who wanted to help Black students? White students are the majority on this campus, it’s up to them to hold their friends, peers and coworkers accountable when they say, do and seem to hold racist, questionable ideologies. These horrific incidents/crimes keep occurring because no one has called out or condemned the behavior of those who commit them. In addition to holding those accountable, joining anti-racist groups on campus like the Racial Justice Coalition, CMASS, the Center for Education, Policy & Advocacy, and the Student Government Association can lead those willing to help in the direction toward allyship. In these spaces it’s important to be actively listening to POC students/staff and taking up space as the majority to get things done, but not forcing those in marginalized groups to share their experiences and taking up too much space as that would be counterproductive.

The BMCP and BSU event, “A Safe Space” held on September 30th was the first official event scheduled after the incidents on campus. It was the only time I had felt truly comfortable since starting my collegiate career at UMass in 2019. It was extremely insightful and validated my experiences here on campus. It was interesting to know that my hardships, feeling less than and/or lonely on campus was felt by most in my community. I am saddened that most of the Black community on campus has been made to feel this way based on the toxic environment and situations that Admin has allowed to continue. It’s troubling that Admin reminds us “hate has no home here”, when that is all we see, hear, experience and come to expect. UMass: do better.