In one of the greatest opening games ever, the Boston Celtics fell in 2OT 134-138. 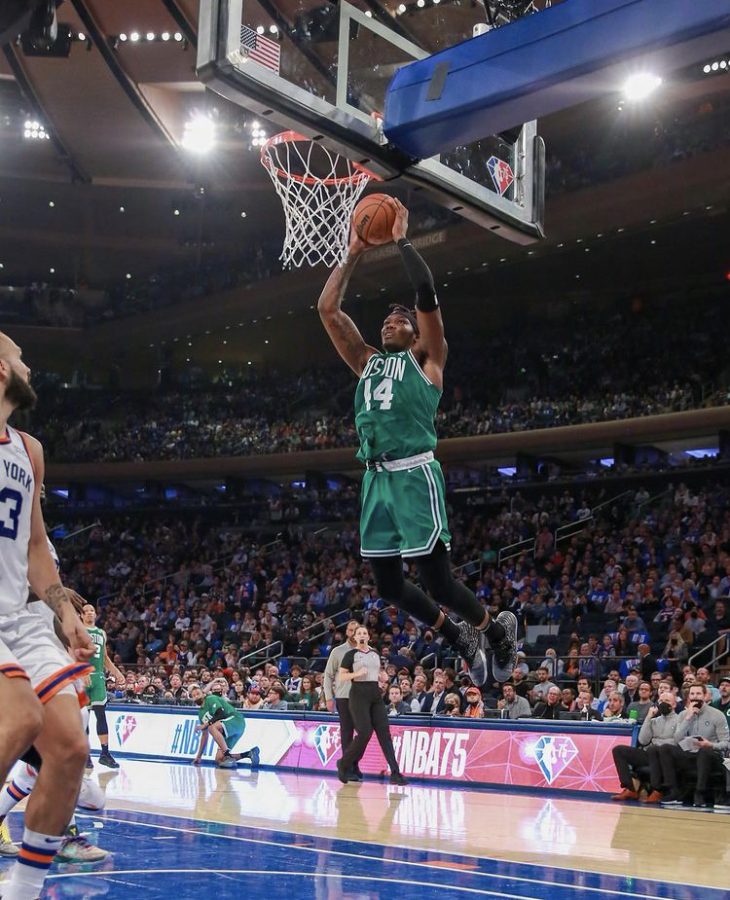 Any hope the Celtics had of competing this year required forward Jaylen Brown and forward Jayson Tatum pushing themselves to levels they had yet to reach. Brown gave fans a taste of that improvement Wednesday night as he showed his improved playmaking, handling and shooting. In years past, Brown has been relegated to a spot-up role with occasional off-ball cutting due to the presence of multiple ball handlers on the team such as former point guards Kyrie Irving and Kemba Walker. These players being gone helped Brown let loose to the tune of 20 points in the first quarter alone.

Tatum did not show this same growth as Brown did tonight. Tatum struggled mightily, going seven for 30 from the field, including going an abysmal two for 15 from the three point line, a wild disparity from Brown’s eight for 14. Tatum settled for long-distance threes on a consistent basis late in the game, avoiding driving to the basket.

This old habit of Tatum’s was one that fans had hoped new head coach Ime Udoka would be able to help curb, but it’ll probably be something that takes a while to get rid of. It was hyped up in the offseason that Tatum would go to more “bully ball” and post-ups but they were a relatively rarity last night. Deferring to Brown’s hot hand might have thrown off his offensive rhythm as well. It’ll end up being a one-off historically bad shooting performance, but Tatum would be better off long-term if he attacked the basket more often. Most of his early game threes were open looks off of good ball movement and those will certainly fall going forwards.

Other than Tatum, the rest of the Celtics roster looked cohesive and the potential is definitely there. Starting point guard Marcus Smart knew his role and took a backseat to Tatum and Brown tonight and hit the shot that would send the Celtics to overtime. Smart also showed his chemistry with center Robert Williams III on various occasions with great lob passes.

Marcus with the feed ↗️
Rob with the finish 💥 pic.twitter.com/tRn3vumdeg

Williams III continued to show his great defensive prowess with five blocks and as long as he’s healthy, he should continue to be a highly impactful player. Third-year shooting guard Romeo Langford finally showed some really impressive strides and confidence, knocking down two of his three three-pointer attempts. Langford would also handle the ball a decent amount, something the Celtics clearly want him to continue developing. Forward Grant Williams filled in admirably for Al Horford, who was on the COVID-19 list, and knocked down three critical three-pointers late in the fourth quarter.

Dennis Schroder also looks like he’ll be a bargain at his contract and despite his struggles from the field he was able to provide eight assists off the bench. Getting Horford back will be massive, as he’s a player who makes everyone else’s job much easier. The Celtics lost a tough game to a very deep team in the New York Knicks and showed great fight late in the fourth quarter, something that definitely felt missing in the past couple years.

🚨 SMART TIES IT AT THE BUZZER 🚨 pic.twitter.com/6chTzMCLYq