Wes Craven: The creator of “A Nightmare on Elm Street” and “Scream”

Did you know that two of the most iconic slasher villains were created by the same person? 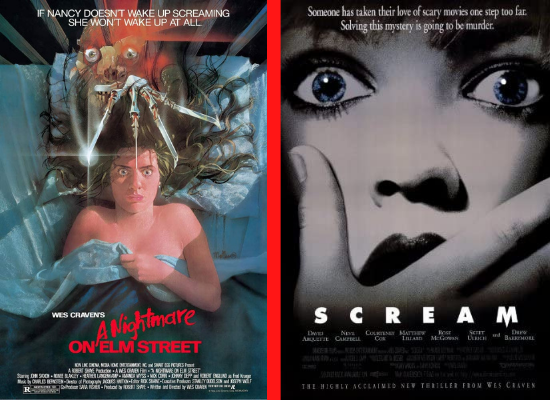 Promotional posters for "A Nightmare on Elm Street" and "Scream"

With Halloween on the horizon, it’s the perfect time to watch some good old-fashioned slasher horror flicks. While not the most subtle or intricate subgenre of horror cinema, the simple but effective suspense and frights of slasher movies has captured audiences everywhere. What not everyone may know is that two of the most classic horror films, “A Nightmare On Elm Street” and “Scream,” were actually directed by the same person. Wes Craven started his career as a professor, but got interested in making short films as a hobby until he would eventually make it his career. Although he originally started as a pornographic film director, he started directing some commercially average (but cult classic) horror films. And somehow he would hit it big with not one, but two horror films that stuck with audiences everywhere, launching franchises and killers that are still in the minds (and nightmares) of many to this day.

Released in 1974, Wes Craven’s “A Nightmare On Elm Street” is a landmark film in the horror genre. While certainly not deep or psychologically disturbing in any intricate way, Freddy Krueger as an entity is enough fuel for horrific ideas. The concept of a killer who enters people’s dreams and kills them creates an atmosphere with seemingly no escape; either progressively get worse from lack of sleep or get brutally slaughtered by Freddy. This is portrayed through the protagonist Nancy Thompsons’ progressively deteriorating mental state throughout the film as she attempts to disrupt her sleep as much as possible. Nancy becoming more noticeably paranoid and aggressive is an element of the movie that really helps in building the horrific atmosphere, even if it’s easy to overlook when the movie’s main forte is still its bloody edge-on-your-seat scares. The sequences where Freddy invades the characters’ dreams are interesting to watch as they often aren’t over-the-top absurd, but rather consistently eerie and just “off” enough from reality to make them distinct to the awake moments.
It may be hard to get truly scared of Freddy Krueger nowadays; with his not-particularly-flashy practical makeup and him being such an iconic horror character he may not have a lot of genuine fear to him. But this isn’t particularly a problem as “A Nightmare on Elm Street” isn’t supposed to be genuinely terrifying. It’s meant to be a classic slasher horror flick; constantly engaging with an interesting plot, suspenseful scenes, and well executed scares. And of course, some fantastical bloody scenes that just need to be seen to be enjoyed.
Perhaps the biggest drawback to the film is its ending. While certainly not enough to ruin the film, it’s hard to come away from its conclusion without being confused. Not only is it needlessly open-ended, but questionably violates the movie’s own rules. Regardless, ”A Nightmare On Elm Street” would prove to stick with audiences as decades after its release, it is still arguably one of the most iconic horror films of all time. Many critics and publications praise the film, declaring it among the best horror films of all time. In true horror movie fashion, the series has been very commercially successful, spawning many sequels (including a 2010 remake), and even those who’ve never seen the film likely recognize Freddy Krueger.

More than a decade later, Wes Craven would come back with another slasher movie that brought new life to the genre. 1996’s “Scream” isn’t a comedy movie, but it manages to have many dark comedic moments and a self aware tone that wasn’t quite present in slasher movies before.
The characters within the film talk about horror movies themselves, mentioning the several cliches that even Craven’s own trademark film consisted of. But its quality isn’t chalked up to just being self referential. “Scream” is still a slasher horror movie to its core, going by many of the beats that “Elm Street” goes through, with no more deep or subtle aspects than that film had.
Without the whole focus on dreams, the movie is a bit more grounded – as much as a slasher horror film can be, anyway. The characters, while certainly the most intricate or complex, are a bit more developed and interesting. Aside from Nancy, the characters on “Elm Street” were mainly basic archetypal characters that fit their roles in the film, but were too one-note to care about beyond their place in the plot. However, the characters in “Scream” are a bit more dynamic, and it’s easier to be intrigued in what happens to the characters themselves. The odd, creepy personality the protagonist Sidney’s boyfriend shows towards her sparks interest as to what’s going through his mind. There are characters like the horror movie fanatic Randy with his deconstruction of horror movie tropes and archetypes, and the passive-aggressive self-centered newswomen Gale Weathers who has a conflict with the protagonist Sidney over the truth of her own dead mothers’ killer. These characters are interesting to watch interact and have the plot unfold onto them, rather than them just being props for the plot and the killer Ghostface’s serial rampage.
Of course, the scenes with Ghostface are as thrilling and fun to watch as ever. The pace of these scenes is done rather well; there’s never a point in the film where either movement of the plot or the slasher scenes are too long. Ghostface often takes his time to intentionally mess with the characters through oddly comedic conversations about horror movies. If not that, the thrill scenes are either a suspenseful game of watching the characters try to survive, or a varying set of brutal kills- from good old fashion stabbing to death through a garage door. The way the plot unravels towards the end is very intriguing to watch, and makes for a satisfying, suspenseful, hectic climax that very much makes up for “Elm Street’s” ending. Much like that movie, “Scream” has earned its place in horror cinema history with a greatly directed spin on the slasher movie genre that many credit with revitalizing popular horror itself.
Released at a time when the genre was filled with a glut of increasingly poor sequels and films that just didn’t hit, “Scream” brought new life, paving the way for new horror movies past it. It spawned numerous sequels, a TV show, and another extremely recognizable (and marketable) figure of cinematic horror with the ever-recognizable Ghostface.

Craven unfortunately passed away in 2015, but his legacy with the horror film genre is one many can only dream of. Just the success and acclaim of these two movies alone is enough to put him on the map as one of the most important horror directors. But that’s not to discredit the rest of his work; while films like “The Hills Have Eyes” and “The People Under The Stairs” aren’t quite as well known or acclaimed, they still have achieved cult status.In fact, there is a remake of “The People Under The Stairs” directed by Jordan Peele on the horizon. Many directors and actors- including Johnny Depp, whose career was launched through “Elm Street ”- credit him as an influence. Wes Craven’s contributions to horror films are still appreciated and enjoyed by people everywhere, and will continue to be for as many passing halloweens as one can foresee.
Email Daniel at [email protected]