Don't knock it 'til you try it. 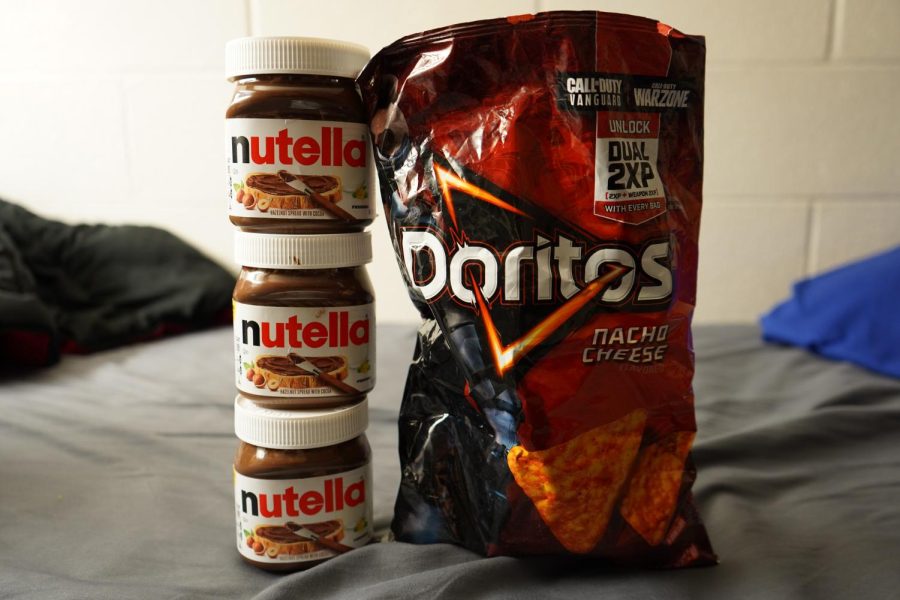 Peanut butter and jelly, bacon and eggs, grilled cheese and tomato soup, Nacho Cheese Doritos and Nutella… These are some of my favorite food combinations of all time .You might be thinking to yourself: “what kind of monster eats bacon and eggs?” OK, maybe I’m the only person to think that. Let’s talk about the elephant in the room- Nacho Cheese Doritos and Nutella is the best thing you’ll ever put in your mouth. A lot of people ask me if I was under the influence of some substance when I conceptualized the combination. I wasn’t- I was just a curious middle schooler.

The flavor is indescribable. It’s a perfect blend between cheesy saltiness and sweetness. In all honesty, describing it verbally would be doing it an injustice. Just go out and buy a party size bag of Nacho Cheese Doritos alongside a jar of Nutella to try it yourself. Yes, it matters that they’re from a party size bag.

A few days after I moved into my dorm this semester, I met my roommate for the first time in real life. From first impressions, we hit it off incredibly well especially considering that we met on Reddit (that is yet another story for another time). We talked for two hours straight about whatever Redditors talk about. At some point, I asked him if he had any weird food combinations that he liked, but nothing came to his mind. I told him about my obsession with Nacho Cheese Doritos with Nutella and it piqued his interest. The next day, he asked his parents to drive him to Walmart.

Once he brought the snacks, I wanted to try it again first to make sure I wouldn’t disappoint him.It was everything I remembered from my good old days. There was so much flavor and my roommate agreed. I just knew that I had to share this with other people. In my dorm’s big group chat, I told people to try my Doritos with Nutella. One guy responded with a “hell naw,” but with a lot of convincing, he showed up to my door and proceeded to scoop up some hazelnut spread with a triangular tortilla chip… then another… and another… and another…

In the groupchat he told about 100 people to give it a try because of how much he liked it. 10 people mustered up the courage to try my snack; 10 people walked out of my room confused yet joyous with this brand new flavor. Somehow this weird snack became a conversation starter and initiated some new friendships.

A few days after moving into my dorm this semester, I went to the Board of Editors meeting for the Daily Collegian since I started a new role as one of their Assistant Social Media Editors. Because I’ve only contributed to the Amherst Wire for the entirety of my college journalistic career, I knew close to no one. However, as a bit of an icebreaker, we went around the entire room of about 50 people, each taking turns saying our high and low of the past week. When it was my turn, I said that my high of the week was that I ate a childhood snack for the first time in a long time. That’s all I wanted to say because I didn’t want to out myself as some weirdo that likes chocolatey nacho cheese tortilla chips to these people that did not know me.

One of the Collegian editors asked me what my childhood snack was. After a really long pause and an awkward chuckle, I murmured the words “Doritos and Nutella…” The entire room filled with one collective “huh?!” I explained myself and I told people not to knock it until they try it. Another editor asked me if there was a specific flavor of Dorito for this pair. I answered Nacho Cheese and that honestly did not help my case. If anything, people ended up more confused than ever before.

Later that week, we had our first Amherst Wire Meeting of the semester. Despite starting as the TV/Film editor last semester, this was my first time meeting some familiar faces in real life. To introduce ourselves to others, we once again had to go around telling everyone something embarrassing about ourselves. Same story as in my data-driven storytelling class. Everyone’s jaw just hit the floor when I told them my obsession.

What stands out is that Doritos and Nutella became a huge running gag between myself and the Amherst Wire Editors. A few days after our first meeting, I sent our editor group chat a picture of both a bag of Doritos and a jar of Nutella right next to one another. Reactions were a little priceless. 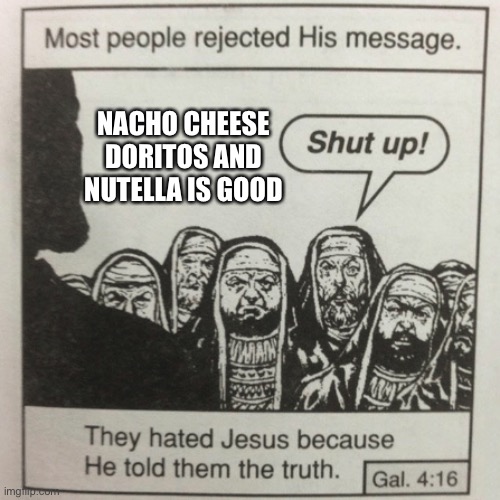 A few weeks after a lot of quarreling over Doritos and Nutella, I finally decided to bring in the goods to an Amherst Wire meeting. Out of all the people in our squad of editors that tried it, no one actively disliked the taste. I’d say that people were pleasantly surprised.

The Wire’s managing editor, Isabel, was adamant about never trying the combination ever. When she finally took a bite of it, it was like I was rewatching “Ratatouille,” specifically the part where the food critic eats the ratatouille and he has flashbacks to his childhood. She had told me that she had COVID last year and was unable to taste Doritos again. She states that pairing the Doritos with Nutella helped her taste that cheesy goodness once more. Maybe this food combination isn’t just good, it’s life-changing.

About two weeks ago, to pass the time of an uneventful shift, I randomly asked my coworker if there were bizarre food combinations that he liked. He was really hesitant at first, but he mustered up the courage to finally tell me his biggest guilty pleasure:

“Aaron, I used to eat these french fries with really sh-tty cheese and I would have them with barbecue sauce,” my coworker said.

In my mind, I’m thinking that if this guy thinks that’s weird, he’s going to think I’m some sort of serial killer when I tell him I eat Nacho Cheese Doritos with Nutella. I confidently told him about my delicacy and his jaw dropped in shock. I honestly had to turn back to make sure that there wasn’t an axe murderer or some ghost behind me because he looked scared.
“In all honesty, Aaron, I really was not expecting that at all, but I’m intrigued,” he said.
My coworker told me that he had nutella at home and he’d stop by the store to pick up some Nacho Cheese Doritos on the way so that he could provide me with input.
The next day, I just saw him walking around campus and he ran up to me with excitement without even saying hello to me first:

“Aaron, I have something to show you,” my coworker shrieked with excitement.

It was a video of him eating Doritos with Nutella for the first time. As soon as the chip hit mouth, I saw his eyes bulge as he nodded his head with satisfaction. He told me all about how amazing it was better than he could ever describe. I asked him if he would ever try it again and he responded with a firm “absolutely.”

I recently got accepted into this Facebook group for people who love food and want to discuss different foods to try out together. One person in this group asked “What’s the weirdest food combo y’all have ever made that might be weird to most but it hits!?” Given my reputation with weird food combinations, I sent screenshots of the thread to our Wire Editor group chat. One of my fellow editors mentioned that peanut butter and mayo sandwiches stood out to her the most. Looking back at that thread, it seemed like 20 or so people enjoyed eating peanut butter and mayo together. I knew I had to try it. In my mind I thought to myself that mayo is made out of eggs so combining mayo and peanut butter is in theory a pad thai in sandwich form. 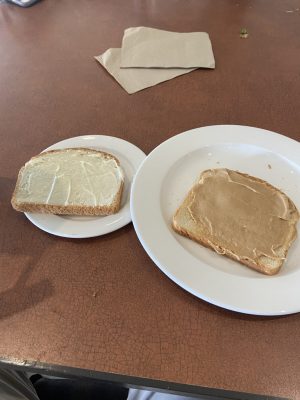 Later that day, I went to Frank with a friend of mine. I didn’t want to freak people out by crafting the sandwich myself so I took a plate and a slice of bread and spread some peanut butter on it then asked my friend to spread some mayo on another slice of bread herself. We gathered back to our table and I crafted the monstrosity. I had slightly high hopes for this mysterious meal. As soon as I took a bite, I was in shock. It was god-awful. The peanut butter hits your mouth right away and there was this weird oily and slimy saltiness coming from the mayo after the first few seconds. I’d give it one star… out of a hundred. Thankfully I had a nice glass of Coke with milk to wash the taste out of my mouth.

After trying this peanut butter and mayo sandwich I learned two things:

I have standards. I love Nacho Cheese Doritos and Nutella; I loathe peanut butter and mayo sandwiches. It’s not like I’m just saying that all of these weird food combinations are good.

When it comes to food, sometimes it is worth it to give some bizarre food combos a try. Maybe you’ll find a new snack you like. If you end up not liking it, now you know never to try it again.