Walt Bell has been fired following his 35-22 Saturday loss against URI. 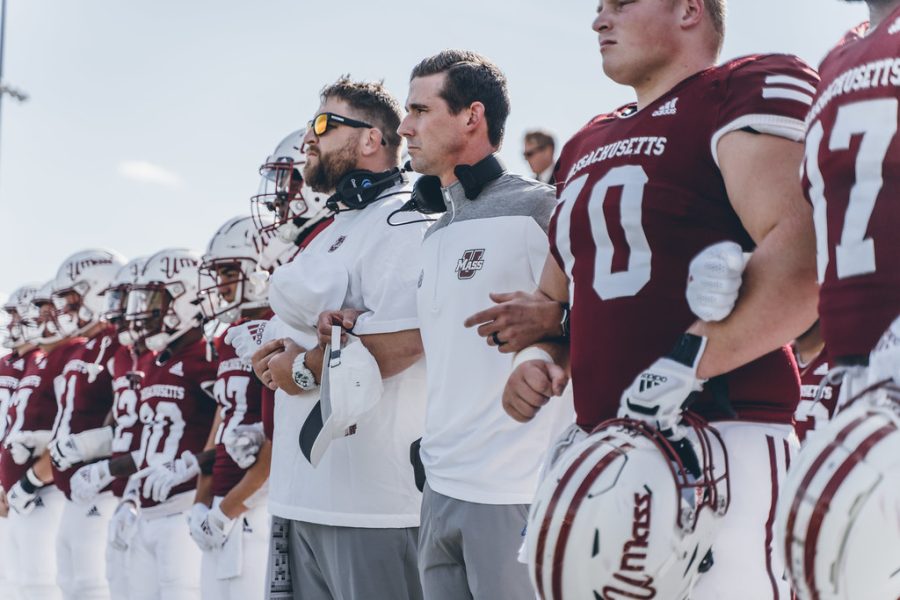 The news comes after the Massachusetts Football Team (1-8)  had one of their closest matchups of the season, only falling to the University of Rhode Island Rams (6-3) by a deficit of 13 points.

The departing, marks one of two on the team – Bamford also letting go the Minutemen’s Defensive Coordinator, Tommy Restivo.

A season riddled with losses and criticism, Bell’s record with UMass culminates to a 2-23 history; one of the two wins marked just this season in the team’s sole win against UConn on Oct. 9th.

However, Bell’s name won’t go out quietly. Because Bell was terminated before Dec. 2nd,  2021, he will receive a buyout for the remaining two seasons of his five year contract, due to his contract’s stipulations. Per the Daily Hampshire Gazette, Bell will not only receive the entirety of his $625,000 yearly salary for this season, but also 75% of his annual salary for years four and five of his original contract– amassing a total of nearly 1 million dollars, ($937,500 to be exact). However if Bell is hired as a coach elsewhere, his new salary will be subtracted from the projected buyout.

Bamford took part in a press conference last Monday, speaking to the media behind the intent of the move, while expressing wishes of hope for a brighter future to match the current talent pool and the upcoming recruiting class the organization has substantial trust in. Given the majority of the season being over, the release of Bell is one that Bamford stated he did not expect.

“We weren’t anticipating having to make a coaching change…. but we felt not seeing some of the progress we wanted on the field led us to decide to make a change on Sunday. I want to thank Walt for his service to this university. He came into a challenging position three years ago…and was really able to develop a number of things in our program’s benefit. He really paid attention to the culture of this team and that can be seen in the team GPA and a number of things from a community and citizenship standpoint.”

For the near future, UMass’ offensive line coach and run game coordinator, Alex Miller, has been promoted to the position of head coach. Miller, a UMass football ‘07 alum is in his rookie year in the coaching staff, hired in January of this year. Prior to UMass, Miller held coaching positions at the Universities of Oregon and New Hampshire– experience spanning from 2008-20.

The search for a new head coach will prove tumultuous. UMass is amidst controversy of still being a part of the independent division of the FBS– with comments from Bell himself in regard to the conference realignment in late October. UMass was completely excluded from these changes. This has raised questions whether the university is putting too much or too little into the program from a financial and a priority standpoint. Successful programs like The University of Alabama– their existence in their respective well known conferences, in this case the SEC, holds substantial weight to their top position.

Whether UMass’ program is at the level to be considered for other conferences, it’s without question that the team has not entered the postseason since 2007. The entrance and departure of now four coaches during this time frame, marks the need for consistency and a positive outcome the program has long desired for over a decade now.

According to the statement released by UMass Athletics, the national search for the new head coach is set to begin, “immediately.”

Despite lessening fan numbers at home games and criticism on campus and social media over the past few years in particular, AD Bamford believes that UMass football is ready to usher in a new era.

“The expectation [next season] is to get to 6/7/8 wins [and] build that winning culture at FBS. All of the pride in our fanbase, alumni, and the way we’re able to generate revenue from that is what we are yearning for… I’m not quitting on getting there. I think we can do it.”