After a 24 year drought, the Minutewomen advance to the NCAA tournament 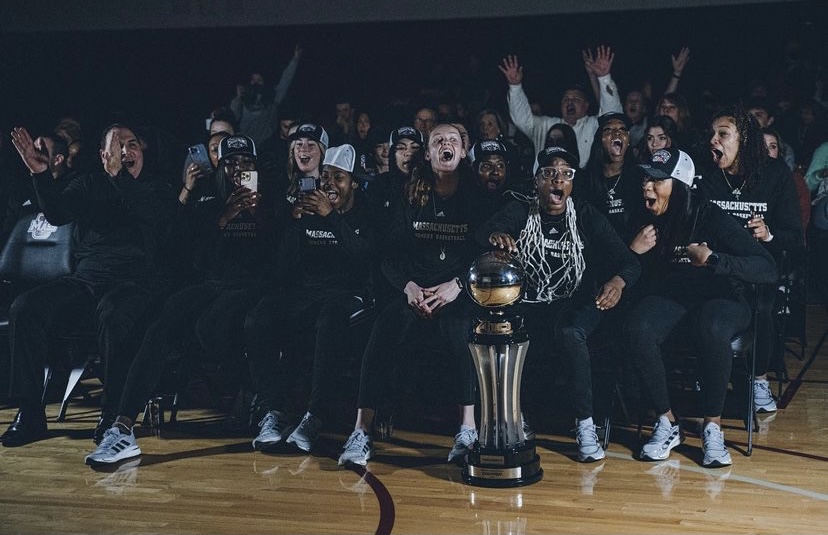 The Massachusetts women’s basketball team continued their record-breaking season, by capturing the A-10 Championship on Sunday. This is the first time in program history that UMass has won the title, taking them to the NCAA tournament after a 24 year absence.

The Minutewomen’s performance at the Chase Arena in Wilmington, Delaware all tournament weekend was one emblematic of their entire season: skillful and dominant. In the quarter and semifinals, strong fourth quarters from virtually their entire offensive core, catapulted the team past Fordham and Saint Josephs. UMass then went on to upset the top-seed, Dayton in the final by a margin of 62-56.

Conducive to her play all season, and career long, graduate student Sam Breen continued to lead UMass towards new heights. Amassing 65 points during Tournament weekend, Breen showed exactly why she was named the A-10 player of year. More than just her scoring ability, the 6’1 forward furthered her defensive prowl, picking up 18 rebounds during the final two games against Saint Joesphs and Dayton alone.

Postgame, Breen was announced as the Championship’s Most Outstanding Player, another award to her ever growing list of achievements.

The Minutewomen’s upperclassmen depth also had premiere performances throughout the weekend. Senior Destiny Philoxy, fostered five assists in each game of the tournament. The A-10 all defensive and second team members also snagged seven rebounds in their first matchup versus Fordham. Junior Sydney Taylor tallied 45 points between the three consecutive games, the A-10 second team guard’s consistent shot an integral part to UMass’ offense.

Both Angelique Ngalakulondi and Makennah White furthered their standout seasons with noticeable contributions to the scoresheet over the course of the tournament as well. Ngalakulondi’s strength in the paint earned her eight bounds and rebounds in Friday’s game alone. White went 83.3% from the field goal position against Saint Joseph’s, the power forward adding double figures during the semis and finals.

Another highlight of the series came in sophomore guard, Ber’Nyah Mayo. The Delaware native was able to achieve what every young athlete dreams of: winning the big chip in front of friends and family. That she did, in impressive fashion. Coming off a strong season, Mayo reached double figures across the weekend, accumulating a 32 points. Her shining game was on Sunday, in 40 minutes on the court, notching 14 points, two swipes, five rebounds, and one assist in pivotal moments to push the Minutewomen past No.1 Dayton.

UMass, now 26-6 on the season, looks ahead to hear their opponent for the first round of the NCAA Tournament.

Due to their place as conference champions, and rank as No. 46 in the NCAA women’s basketball net rankings, the Minutewomen are ranked in the 12th seed.

On Selection Sunday, the Minutewomen’s first opponent was announced. UMass is set to take on No. 5 Notre Dame this Saturday, March 19th. Tip-off is projected for 7:30pm at Oklahoma’s Lloyd Noble Center. Fans can tune in on ESPN 2.

Their historic season comes at the helm of the leadership powerhouse in UMass’ head coach, Tory Verdi. Since Verdi’s first season in Amherst, his guidance has brought the Minutewomen to numerous broken records and awards. Notably, Verdi has brought the program in just five years, to break the most single-season wins record; amounting 21 victories in the 2021-22 regular season alone.M

Regardless of the remainder of their postseason play, the 2021-22 UMass women’s basketball team is one with heart and talent unlike the university has ever seen. This is a team that deserves the school’s same support that they show to other high-profile programs. Minutewomen basketball is a team here to stay.