For UMass Hockey, one door has closed and countless more have opened.

Although the team may not have accomplished their ultimate goal of repeating as national champions, the future remains bright for the Minutemen. 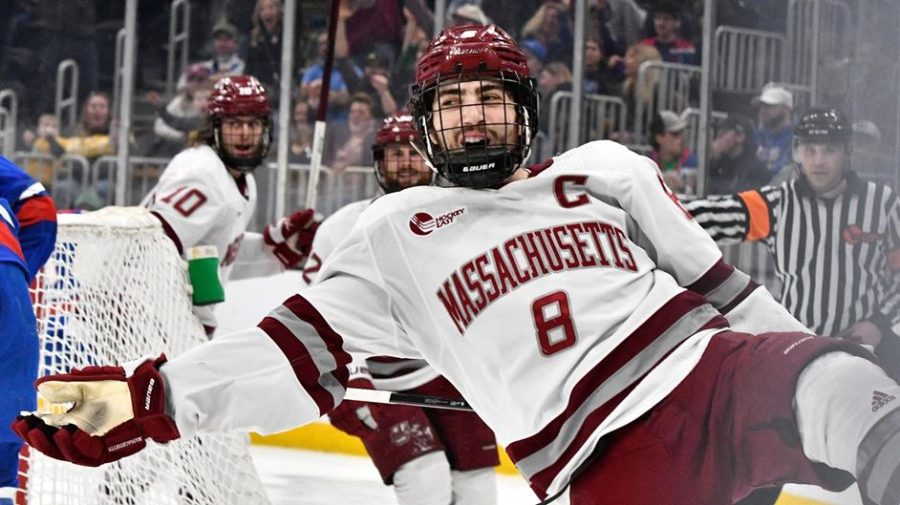 As the horns began sounding and Minnesota’s bench cleared onto the ice, reality began to sink in for the UMass Minutemen. Tears ran down the faces of many players as the coaching staff began to console their resilient group. Their quest for another national championship had come to an end in one of the most painful ways possible.

Fresh off winning another Hockey East Championship against UConn, the Minutemen were clearly entering the tournament with some real momentum. After undergoing some early season woes against the nation’s best, it appeared that this experienced group had finally figured it out and was poised to make another deep postseason run.

The game could not have gotten off to a better start, as UMass was quickly up 2-0 thanks to goals from forwards Reed Lebster and the hot-handed Garrett Wait. Though Minnesota got a goal of their own fairly soon after, courtesy of an unfortunate own goal, the Minutemen had momentum going into the second period. Both teams were able to score again during the following period, but the third period truly swung the momentum of the game.

UMass just could not find a way to generate quality chances and unfortunately gave up a power-play goal with about six minutes to go in the period. In overtime, Minnesota’s forward Ben Meyers was able to squeak one by UMass goalie Matt Murray and seal the game as well as UMass’ championship hopes.

"I thought our kids were good tonight, I thought they played well enough to deserve to win, but congratulations to Minnesota, they’re a very good team.” – @CoachCarvelUM on tonight’s 4-3 OT loss in the NCAA Tournament

This team had every right to be disappointed and heartbroken, as any team with its competitiveness and fiery spirit should be. They fought all season long with hopes of returning a trophy back to Amherst and continuing to put a once-forgotten hockey program on the map. As sad as it is that their season is over, and many collegiate careers as well, this group should be proud of what they have accomplished not only this year but during their time in Amherst.

Prior to the arrival of head coach Greg Carvel, it may have been laughable to think that so many UMass players would have a chance to go pro after their season concluded. For reference, the team did not experience a winning season from 2008 to 2019. It is far easier to think about those dark times now that the team is boasting players like forward Bobby Trivigno, a finalist for the Hobey Baker Award. Josh Lopina recently signed a contract with the Anaheim Ducks. Scotty Morrow was the 40th overall pick in last year’s NHL draft. The list goes on. It can be heartbreaking to watch games such as the 2019 National Championship and this past game against Minnesota. The opportunity alone to be in high-stakes games should be something that UMass fans cherish.

Not only should UMass fans cherish what they see in the Mullins Center, but all of the hockey alumni who are continuing their hockey careers and representing the school. How exciting is it to turn on the television and see defenseman Cale Makar flying dominating professionals for the Colorado Avalanche in the same way he dominated collegiate players? Seeing Los Angeles Kings goaltender Jonathan Quick hoist a Stanley Cup after a terrific playoff run? Consistently seeing your school be ranked in the top twenty teams in the nation? None of this should be taken for granted but that does not mean it should come as a surprise.

UMass has officially been put on the map as a hockey school. Many of the players who helped win the national championship have already begun their next chapter, but that does not mean that expectations should be lowered in any way. Top-ranked recruits continue to call Amherst home and some of the teams’ younger players will get a chance to shine. Many fans will mourn the loss of Trivigno, who has meant so much to the success of the program ever since he arrived as an under-recruited freshman, but he will go down in history as arguably the greatest Minuteman of all time. This season did not end the way that the players, coaching staff and fans would have wanted. Regardless, this team will have every opportunity to be in a similar position each and every year which is something that the university could never have imagined a few years ago. I guess the whole “NewMass” thing does have a pretty nice ring to it.