Student Presley Forrest stands up for Ukraine while living at UMass. 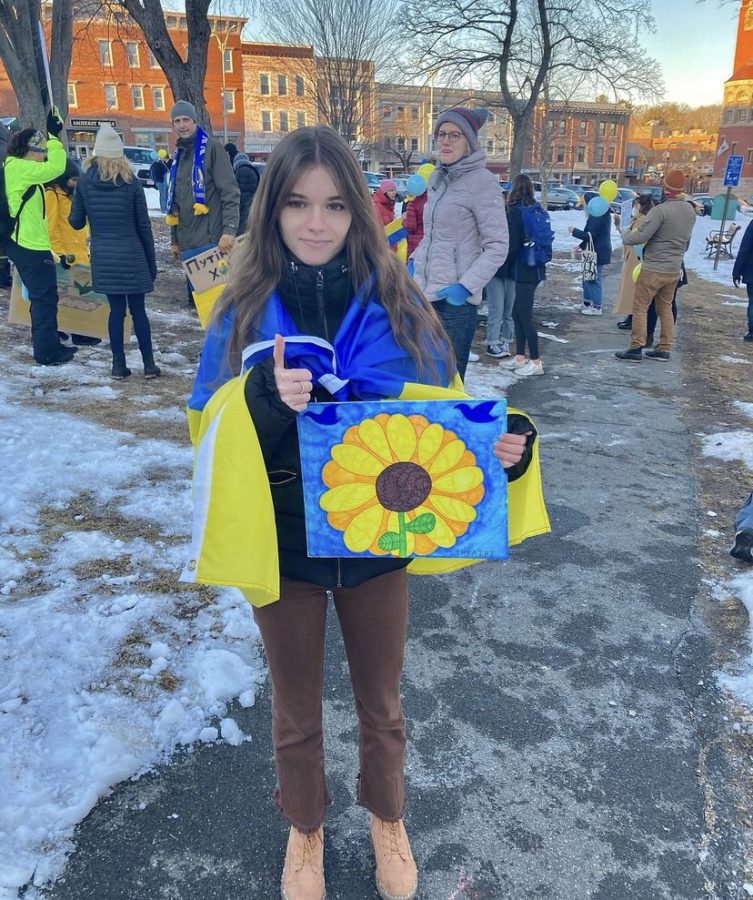 Forrest at the protest holding a sign she made of a sunflower, the flower of Ukraine. Photo courtesy of Presley Forrest.

**Editor’s Note: Due to the subject matter, Presley’s aunt Alina shall not include her last name due to privacy and safety reasons**

AMHERST- Sophomore Presley Forrest (she/her) discussed in an interview the hardships that her and her family have faced since Russia launched its attack on Ukraine on Feb. 24.

Recently on March 4, Forrest organized a protest in order to stand up for Ukraine which was hosted at Amherst center. Forrest continues to advocate for Ukraine and also suggests changes be made at UMass for Ukrainian and Slavic students during this time.

Forrest has lived in the center of Kyiv, Ukraine for about four years now with her parents and younger siblings. Kyiv is the capital of Ukraine and one of the country’s largest cities, home to Ukraine’s president Volodymyr Zelenskyy.

Forrest’s family members fled south of Portugal just a few days before Russia’s invasion and stayed in an Airbnb. Due to the fact they were Ukrainian, accommodations were made for their stay; they received twenty additional nights at a reduced price.

Her family plans on returning to Ukraine eventually, but they are unsure when that time will come.

“It’s where my dad wants to live like the rest of his life in because like our whole business is there that he’s been building up for like years and years and like my whole family’s there and everything like that,” said Forrest.

Ukraine is home to Forrest and her family and this devastating situation is affecting their futures as well. Forrest described how everyday Russians are getting closer and closer to her city. Currently, she said they are about seven kilometers away from Kyiv.

No harm has been caused to their property in Kyiv but the troubling thoughts arise when Forrest realizes what she has lost and what will be missing if and when she returns home.

“It’s really hard to imagine like every single place that’s so important to you that you made memories at is just going to be gone and like you can never go back to that place ever again; and so like I have a lot of photographs and things that I cherish from Ukraine. But all of those places are not going to be the same when I go back if I ever get to go back in a very long time,” Forrest stated.

Feeling like she is not doing enough has also been a troublesome aspect of Forrest’s time while living at UMass during the invasion.

“It’s really difficult because you feel as though you’re not really doing enough. Like I know for me just like sitting at UMass and having my family be safe and have me be safe. It feels great, but it also feels really horrible. Because it honestly feels like you’re not doing enough,” Forrest said.

As the nature of the event is deeply saddening, Forrest also feels that it’s better to be around other Ukrainian and Slavic people to cope in these times together. She specifically mentioned her Russian professor at UMass, Anna Shkireva, who is from Russia, in whom she prefers talking to about this subject matter.

“It’s just nice to get depressed with other people and be like yeah, this sucks so bad. I’m so angry about it. It’s so horrible. Because like they actually understand what’s going on,” Forrest said.

In response to the feelings of depression, the drive to want to do more, Forrest and her aunt, Alina, decided to organize the protest for Ukraine together.

Alina is originally from Kharkiv, Ukraine and now also lives in Amherst, MA. Alina was the first to suggest that the two of them organize a protest. Forrest passed out flyers at UMass and sent out emails while Alina communicated with others living in Amherst in order to advertise the event.

Forrest expressed that approximately two hundred to two hundred and fifty people came to support Ukraine. This included students, adults, UMass professors, and older Slavic residents of the area. Forrest was glad with the outcome and excited to be able to listen to other people speak in both Russian and Ukrainian. Seeing everyone unite together showed her how many people care about Ukraine and Forrest viewed this as a very nice thing.

Here at UMass Forrest argues that there is still not enough being done by administration to help Ukrainian and Slavic students who are currently suffering right now financially. Forrest was merely offered counseling services and a microgant of five hundred dollars.

Forrest suggests that, “It’d be great if we could get some more form of like economic help because that’s the most worrying aspect of this is like oh, wow, we have zero money, you know, how we’re gonna have to pay for college for like the rest of time here like me.”

However, Forrest has felt very supported by some of her professors at UMass. In particular she expressed her satisfaction and happiness with treatment from Shkireva, Régine Spector, head professor of the Russian department, and Brenda Bushouse, professor of political science and public policy. Spector also invited Forrest and three other students to speak at a seminar hosted by the College of Behavioral Science in order for Ukrainian students to reflect on the war.

Forrest also hopes to create a weekly discussion group on campus for Slavic students or those interested in Slavic culture, history, or politics to attend. Forrest believes this group will be beneficial for students to be realistic about the nature of these events together.