UMass basketball may be relevant again, but at what cost?

With the basketball program struggling to escape mediocrity, Frank Martin was hired to return UMass to national relevancy. Is he worth his price tag? 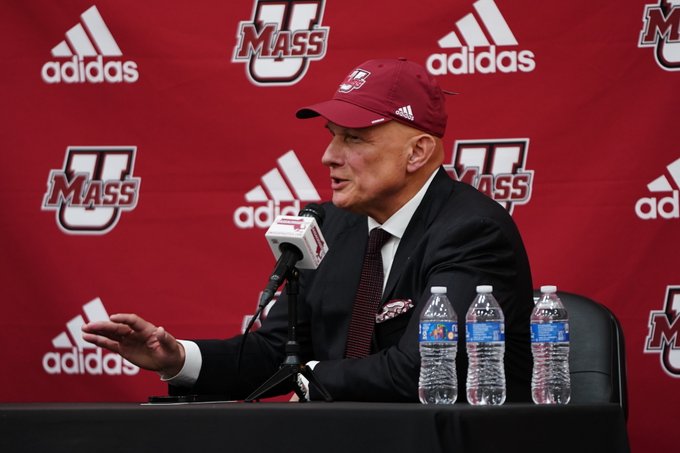 It is not easy to win games in any collegiate sport at the Division I level. The UMass basketball program has certainly lived this reality over the course of the past two decades. Following the departure of legendary head coach John Calipari, the program has undergone some dark times as they try to replicate the success of the team in the 90s. UMass has had five different head coaches since 1996, with their most successful campaign being a first-round exit in the 2013 NCAA tournament. As the university continues to push the notion of “NewMass”, constant mediocrity will not be accepted as tradition, as it unfortunately has with a particular football team in the area.

Enter new head coach Frank Martin, who just signed a five-year deal worth around $8.5 million. Martin, a Miami native, has spent the last ten years as the head coach of the South Carolina Gamecocks. Martin led the program to a respectable 171-147 record during his tenure and even led his squad all the way to the school’s first Final Four appearance. Though his impressive win total is one that UMass fans could only dream of during the last ten years, Martin’s time in Columbia was far from what many would consider a success.

Martin was only able to reach the tournament one time, with the one berth being the aforementioned run to the final four. Unfortunately for Martin, South Carolina’s basketball budget was simply too high to warrant one March Madness appearance. With that being said, Martin’s track record as a head coach at South Carolina and Kansas State would suggest that he has the ability to turn UMass’ program around for the better.

Take a guess where I’m heading to. Time to roll. Let’s go! pic.twitter.com/3Gj0rqYnW6

The good news for the newly acquired coach is that, although expectations will be lifted due to his hefty salary, the term ‘success’ will have a very different definition in Amherst than it did at his former university. For a program that is talent-malnourished, the team will not be expected to make a Cinderella run in the tournament, or even be there in the first place. If, next season, they are able to compete within the Atlantic 10 Conference and potentially make a run at capturing the conference, fans would undoubtedly be pleased. At the very least, the new signing will prompt more fans to attend the near-vacant Mullins Center for home games. His presence alone should also be enough to draw more recruits to UMass, in a similar way that UMass hockey head coach Greg Carvel did when he was first hired. UMass took a similar gamble with the latter and the results have changed the hockey program’s entire trajectory.

It is fair to wonder whether this hiring makes sense. Martin’s affluent contract makes him the highest paid state employee in Massachusetts. In a capitalist society, how is it that the UMass basketball coach is at the top of the hill? Such a large sum of money could have been put towards more residence halls. If I was one of the many students being forced into a Z-room triple next year I know I would not be viewing this hire favorably.

CMASS is also another great example of a club that could really use funding, especially when thinking about the controversies surrounding the university in the fall. There are a plethora of campus clubs and organizations that could have used even a tenth of Martin’s annual salary. If the team continues to float around a 50% winning percentage, the questions surrounding the hire will only get more incessant.

The way to put these questions to bed is simple – Martin needs to win games and make UMass a consistently competitive program. Martin has found varying levels of success at all of his previous head coaching positions, but taking this program to the next level could very well be his biggest accomplishment yet. All of the staff and students questioning this hire will be undoubtedly silenced if he can bring in more money by making UMass nationally relevant again.

At the end of the day, the hire does make sense from the athletic department’s view. The school has been attempting to undergo an institutional evolution by replacing its “Zoomass” reputation with one of academic prestige and national relevancy in regard to its athletics. With the hockey team still temporarily boasting the title of “reigning national champion”, it does make sense to strike while the iron is hot and make a big splash with the Martin signing. If there was ever a time to improve the school’s athletic reputation, it is now. If all goes well, UMass will have hired two tremendous coaches within the past five years that will be able to bring in more money and top recruits.

Whether you are thrilled by the polarizing hire or are frustrated with his salary, only time will tell whether the hire was successful. UMass basketball has more potential under coach Martin than it ever did under previous head coach Matt McCall, who simply seemed to be in over his head. There is no doubt that hundreds more fans will be in line outside of the Mullins Center to see if this team is finally ready to taste winning again. Frank Martin, I wish you absolutely nothing but the best and hope that the basketball team can become what it once was. If not, well, hopefully some of your salary can go towards paying campus tour guides more!