Op-Ed: Daniel Theis can fill in for Robert Williams, it just won’t look as good

Daniel Theis has never been the flashiest player in the NBA, but for the Celtics, he’s always been one of the most important. 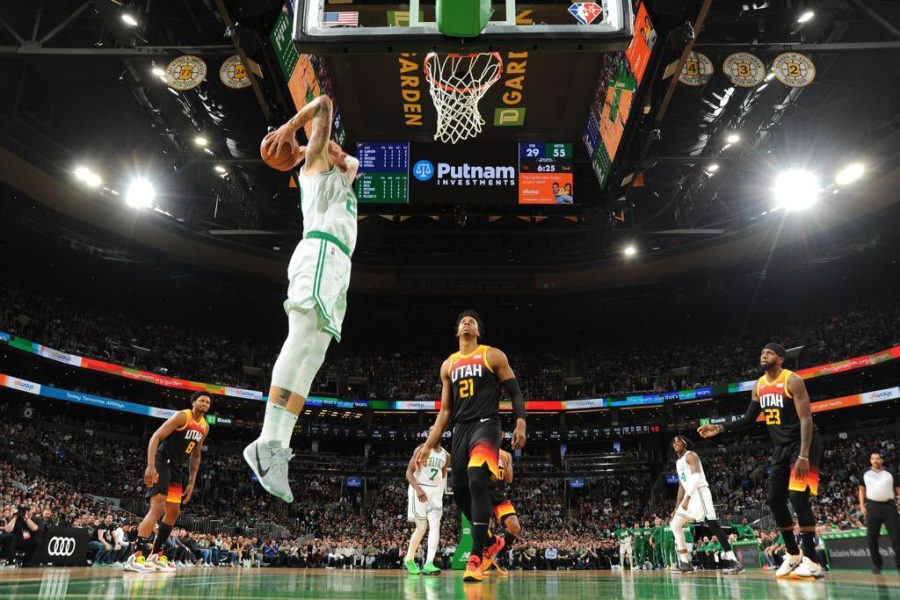 The Boston Celtics were rolling. From January 1 to March 27 they had the second-most wins in the NBA, the third-ranked offensive rating at 117.1 and the number-one ranked defense with a stingy defensive rating of 104.3. Whether it be the Denver Nuggets, Utah Jazz or Minnesota Timberwolves, all teams headed for the playoffs, the Celtics were clearly at the top of their game. Then, center Robert Williams III pulled up lame on a defensive possession and had to come out of the game. Before you knew it, Williams was getting surgery done on a torn meniscus and what seemed like a bright season suddenly had a dark shadow cast on it.

This isn’t the first time Celtics forward Daniel Theis has had to step up come playoff time. During the Celtics’ 2019-2020 season, Theis was thrust into a much bigger role following the departure of forward Al Horford for the Philadelphia 76ers. Theis would have to continue to expand his role on a bigger stage for the NBA bubble and playoffs in the summer of 2020.

The weight is going to once again fall on Theis’ shoulders, except this time with Horford’s help. On the season, Theis has only averaged 16.6 minutes a game, around eight short of the 24.1 minutes played he averaged in 2019 which rose to 28.4 in the playoffs. Theis has always been a sound defender and a decent lob threat while adding a jump shot to his game in the past few years. That being said, most of the aspects of Theis’ game that are solid end up being spectacular when Robert Williams does it, begging the question of just how well Theis can fill in for him in these situations.

In the 14 games with Williams ever since Theis’ return to the Celtics, he averaged 5.3 points and 4.1 rebounds a game. In the four games since the injury, the big man has averaged 11.0 points and 5.3 rebounds at 27.8 minutes played. This includes a 15 point performance against the Miami Heat where Theis was able to go six for six from the field.

It’ll be interesting to see how much Theis is used considering the amount of double-big lineups the Celtics ran with Horford and Robert Williams. It may be matchup-dependant on who gets played the most out of Horford, Theis and small-ball big man Grant Williams. In the matchups against the Indiana Pacers and Washington Wizards, coach Ime Udoka chose to go with Theis from the jump, electing to start him alongside Horford and sub him out later in the first quarter for Grant Williams.

Against the Pacers, Theis was in his fair share of Robert Williams-type situations where he’s playing help defense from the corner, except he goes about it in a completely different way. Where Williams would show off athletic prowess and fly towards the ball like a free safety in football, Theis stays fairly grounded and close to the hoop, looking more to rebound than impose his will. Here, as Pacers guard Buddy Hield takes a dribble handoff and drives toward the hoop, Theis shows this style of help defense.

In this situation, Theis helps out a little more aggressively and once again stays grounded, but provides enough of a deterrent to force the ball to the corner for a 3-point attempt from Justin Anderson, who was on a 10-day contract. Losing that element of spectacular play on defense really shows how special Williams is, but Theis can fill in admirably.

Williams has always excelled at guarding quicker guys on the perimeter despite his size, even managing to tip a three-pointer from time to time. Theis is okay on the perimeter, but I’m more concerned to see if he can defend a shooting big man. Washington Wizards forward Kristaps Porzingis is pretty clearly a shoot-first big man, but the Celtics made the choice to let Theis drop down on screens and give Porzingis open looks in the first half. If the Celtics draw a team with shooting bigs such as the Chicago Bulls’ center Nikola Vucevic, the Toronto Raptors’ no-center lineup or even the Brooklyn Nets with forward Kevin Durant playing center for stretches, coach Udoka may have to make some adjustments on the fly.

Offensively, Theis once again can provide a lot of what Williams does, just at a lesser charge. Theis will continue to be a lob threat, an option that Celtics guard Derrick White consistently opens up with his floater and drives down the lane. Theis has always moved well as a roller. Giving an off-ball pick for Jayson Tatum, Theis gets exactly where he needs to for a smooth bounce pass to Theis for a layup. Williams certainly expands the range for which a lob is available, but Theis also assures these options open up consistently. Theis also added a little jumper to his game in the past few years, which may be a handy wrinkle to have in the playoffs.

As the playoffs draw closer and closer, the Celtics will have the opportunity to cap off a tumultuous, yet legendary season. There have been plenty of setbacks along the way, but few have been as disheartening as Williams’ recent injury. Luckily, if Theis can deliver a brilliant early playoff run, the Celtics can finally break free from the Eastern Conference and give themselves a chance at their first title in over a decade.