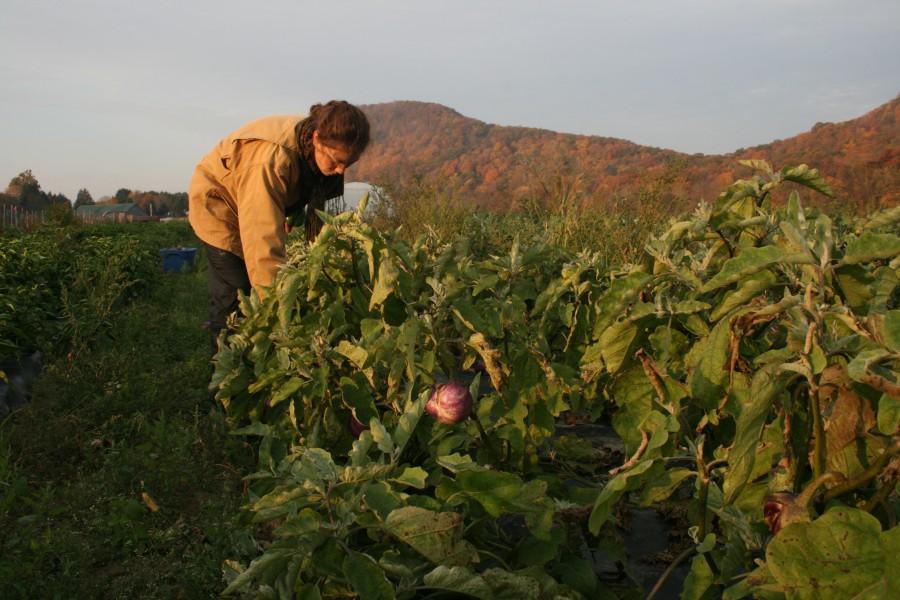 On a chilly October morning in a field not far from the Connecticut River, University of Massachusetts senior Molly Bajgot is up before sunrise, plucking eggplants and peppers from long green rows and tossing them into a large blue container.

Bajgot is one of 10 students involved in the Student Farming Enterprise, a yearlong course offered through the Stockbridge School of Agriculture. Twice a week, the class visits the South Deerfield farm to work from 6:30 to 9 a.m. On Friday afternoons, they hold a community-supported agriculture (CSA) pickup and sell their produce at the UMass Student Farmer’s Market.

The farm began in 2007 with two students growing broccoli and kale through an independent study, and the class was established by Stockbridge a year later. Now in its seventh season, the farm supplies organic produce to stores and eateries throughout the Amherst area, including the UMass Dining commons and a local Big Y supermarket. This fall, they provided 50 CSA shares of produce to the UMass community.

“It became what it is today because of the demand and interest for what we’re doing,” said class instructor Amanda Brown, who, along with fellow vegetable specialist Ruth Hazzard, helped develop the program. Last year, Brown said the farm harvested 13 tons of produce from two-and-a-half acres. This year, she’s expecting 18 tons from four-and-a-half acres.

The farm is part of the UMass Crop and Animal Research and Education Center, located just down the road from other Stockbridge facilities, including the Turfgrass Management program’s Joseph Troll Turf Research Center.

The Student Farming Enterprise reflects a growing student interest in the occupation of farming and locally produced food.

The university now offers a sustainable food and farming major designed to teach students about growing and marketing food, advocacy, farm-based learning and public policy. This is good news, because according to the Bureau of Labor Statistics, 60 percent of the farmers in this country are 55 years old and older.

Professor John Gerber, program coordinator for the major, said that it was established through the Stockbridge School of Agriculture in response to student demand. “We’re just running to keep up with student expectations,” he said. Enrollment in the major went from five students in 2003 to almost 100 today. And according to Gerber, most of these students aren’t coming from farming backgrounds.

Gerber believes this influx is likely due to a growing awareness of climate change, an increase in the use of fossil fuels and the economic disruption we’ve seen over the last 10 years.

“Local farming is more diverse, it’s more resilient. It doesn’t have to ship things as far, so it’s not contributing to the use of fossil fuels,” he said. “I think that people are becoming more aware that if they buy local, you’re actually supporting your own home community rather than a mega-farm in Texas.”

Graduates of the major have gone on to start their own farms, teach, practice herbalism and more.

Lilly Israel is a senior resources economics and sustainable food and farming major from New York City. Growing up, she said her parents weren’t involved in local food and usually bought the family’s produce from the grocery store. Today, Israel is involved with the student farm and said she strives to build a community around food.

“I’m really into the local food movement,” she said. “On top of the reduced carbon footprint, I think the really important part about eating local, and the part that really interests me, is supporting local farmers [and] the local community.”

Through the Student Farming Enterprise, Israel and others have learned how to plan a farm, produce diverse organic vegetables and market their products. “It’s everything from buying seeds to selling produce,” said Brown while taking a break from covering a row of crops to protect them from the impending frost.

“The student farm is like the epitome of the sustainable food and farming major,” said student farmer Max Traunstein.“It’s the most hands-on experience that you can get.”

One of four majors in the Stockbridge School of Agriculture, sustainable food and farming is the only program focused on the food system. It’s science-based, but hands-on.

“We make biology practical, we make environmental science practical. We make social justice issues real,” said Gerber. “This is a major where you roll up your sleeves and get to work and do something creative,” he continued. “The food system is a place where you have to show creativity if you’re going to be successful, because it’s changing so fast.”

Gerber said that students are constantly innovating. The Permaculture Initiative, which put three permaculture gardens on campus and two in the surrounding community, began in his Sustainable Agriculture class five or six years ago when he gave the class an assignment to come up with a project to change the world.

Brown hopes to keep expanding the student farm and increase knowledge about creating a local, healthy food system on campus.

“We’re really trying here to create as much of a closed-loop system between students growing food for students on campus,” she said. “I really hope to just kind of keep expanding and keep improving the technologies we use.”

Aviva Luttrell can be reached at [email protected]